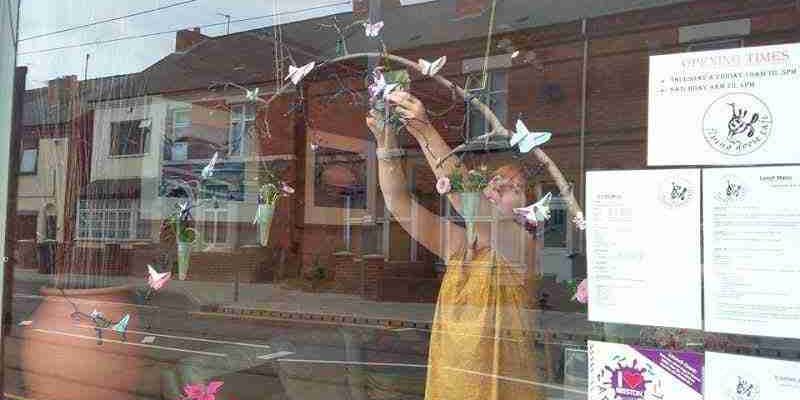 In 2011, the year that first flimsy black and white copy of The Beestonian was printed, the Arts Council followed up on its 2008 ‘segmentation’ research to investigate ways that they could ‘get great art to everyone by championing, developing and investing in artistic experiences that enrich people’s lives.’

Around the same time our libraries were undergoing the transformation to Inspire Culture Learning Libraries, offering a range of events, educational opportunities, creative workshops and exhibitions to engage people creatively in the community – Beeston becoming one of these.

Having recently taken up residence in the Rylands, Marysia Zipser immediately identified Beeston’s potential as an international tourism destination. She set up Art Culture Tourism (ACT) in 2012 as ‘a strategic vision to embrace the prominent creativity’ that she observed in her new town. Marysia initiated and set up creative networking events, the first of which was held at the magnificent Anglo Scotian Mills in December 2013 and featured a ‘Lace’ themed exhibition. ACT is now a fully established Community Interest Company and continues to grow.

The White Lion pub at Station Road junction underwent a huge facelift in 2013, perhaps in preparation for the arrival of the tram, and was taken over by community driven landlord Sergio, who kicked off his cultural contributions to the town with Beestival, celebrating the best of Beeston with the lively Latin American band Mas Y Mas providing the party atmosphere. House Music Saturdays and Samba Sundays and a whole host of other exciting events including Oxjam and Beeston Film Festival were held there over the years.

Also in 2013, the Beestonian Film Club started meeting at Café Roya, just before it opened its doors to serve us the most delectable vegetarian dishes created by talented Beestonian Roya Bishop. If you were lucky enough to have sampled her gourmet delights on evenings at the Flying Goose then you will know what a treat this was for Beeston.

2014 is the year that Alison Barlow began to successfully pull together local artists and makers with a Facebook page and networking group Made in Beeston. Her intention was to enable potential customers to find all of Beeston’s makers of unique handmade goods and services all on one place but also to provide support for local sellers. 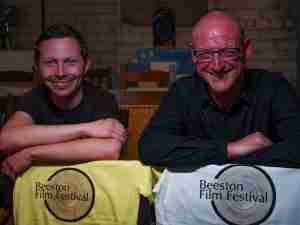 The annual Beeston Film Festival was launched in 2014 by John Currie and James Hall, each year showcasing short films from talented filmmakers across the globe. Winners receive the celebrated B’Oscar award, handmade by local glass artist Becjoy Glass. This is also the year that Sara Gaynor set up the White Wall Gallery at the White Lion and the artist held their first festive art fair, which was a huge success. 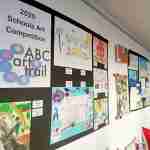 Public Art exhibitions were becoming a huge part of Beeston’s creative culture now, and in 2015 two significant arts trails takeover the streets! Firstly the ABC Art Trail, an off-shoot of the Open Studios tours, puts on a public art show in May that featured work from a number of local artists and makers. This annual event increases in size and popularity each year. A separate one-off event was organised by Helen Stevenson this year as part of the Let’s Go to Beeston initiative.

As well as organising artist work on the walls and in windows up and down the High Road and adjoining streets, Creative Beeston was involved in folding hundreds of origami butterflies to adorn ship windows and attract attention to the accompanying trail. The ‘Beeston Butterfly’ became the focus for an interactive exhibition at Beeston library, where visitors were encourage to fold butterflies and add them to the display. 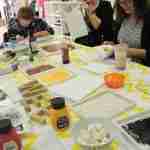 In 2016 it seemed as though there was a surge of new independent businesses dedicated to creativity. In April Two Little Magpies Gift Shop and Studio opened its narrow doorway to a broad showcase of hand painted units and shelves stacked with beautiful handmade goods made by the Magpies themselves (Lucy and Jackie) and many other clever crafters.The Candela Shop Opened in August and Creative Beeston began the community workshops in the spacious and sweetly scented upstairs room.

These later moved to Liam Richmond’s Rudyards Tea House which quickly became an art café where local artists and photographers could display their work.

The long awaited Canalside Heritage Centre welcomed the community into its fresh tea tooms and weir side gardens, providing a space for heritage crafts, art classes and an opportunity to learn more about this important historical site. 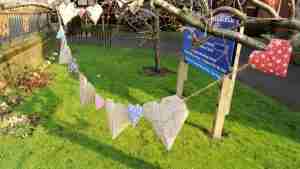 By 2018 Rudyards had become something of a creative hub and visitors were encouraged to indulge in a bit of origami with their tea and cake, courtesy of Creative Beeston. A number of origami displays were installed in Rudyards by the Bee Creatives which complemented the art gallery well. 2018 also saw the arrival of the street art with a two day festival in June which certainly caused a stir. The project (launched and driven tirelessly by Jeanie O’Shea) gained financial backing via crowdfunding and corporate sponsors, then encouraged the council to commission a mural featuring famous Beestonians Sir Paul Smith, Edwin Starr and Richards Beckinsale with an art fund they had inherited from Henry Boot Plc. 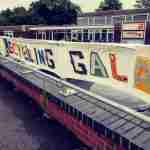 By the end of the summer Beeston formed it’s own Eco Action Team, although it’s not known if the two events were actually linked.

2020, the year that most of us want to forget, was all about lockdown projects and keeping connected through creativity. Many creative groups tried to keep running online, learning to adapt to delivering sessions on Zoom. Confined to our homes for much of the year, our desire to create and connect through art was evident by the art in our windows and chalked onto pavements at the end of our driveways. 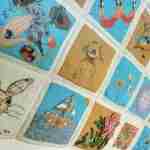 Messages of hope and encouragement were everywhere, we created our own safe spaces through art. ‘Lockdown projects’ were conceived and produced, a way of expressing our struggles and what we were finding solace in at this time. Like many supportive communities, the Beeston Creatives stayed connected via social media and Zoom for the whole of the year, wondering when they would be able to create together again.

Their lockdown project, a community quilt, was pieced together bit by bit over the summer and exhibited at Canalside Heritage Centre in September.A symbol of the importance of creative therapy during stressful times.

And now we are here, at the end of 2021. Things seem to have been progressing at a much slower pace this year, but nevertheless we have still seen our creative community grow. Highlights this year have been the return of the ABC Art Trail and or course another community initiative facilitated by Jeanie, The Beeston Showcase. This is another lockdown project that has been on display in temporary gallery space inside the empty Argos store. The opportunity for local artists to promote their work at a time when galleries have been closed to the public and craft fairs haven’t been able to take place due to Covid 19, has been extremely valuable. Not to mention the joyful colour it has brought to so many people passing through at a time when it was perhaps most needed.

Art and creativity really does bring people together.