Written by jadekmoore on September 26, 2016. Posted in Community.

Here’s to the next five 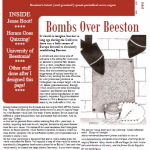 Wow: somehow, against all odds and expectations, we have made it to our fifth birthday. That’s five years since the first edition of The Beestonian, printed on four pages of strangely-hued paper, hit the streets. We had no clue what we were doing, but that should never get in the way of a good idea. We only knew we wanted to celebrate the excellence of living in a bizarre, vibrant town; in a format perfect for reading while sitting with a coffee or a pint.

Beeston is more about the future, keeping pace with the changes that are inevitable in a vibrant, exciting town.

Since those inauspicious beginnings, we’ve gone on to expand four fold into 16 pages, bring on proper designers, publish the finest local writers, interview and feature the best local (and not so local) talent, run a successful independent film club that still occasionally springs to life, produce a documentary film about the town in the flux of the tram-works, partner with Oxjam to help make it the most successful such festival in the UK, hold meetings on development and other issues, run charity events and appeals and much, much more. It’s flown by.

Since then we’ve had a Tesco appear, the tram-works cleaved the town apart and then become part of it, the Square torn down and (sort of) rebuilt, BID flourish and die, pubs actually get much better, restaurants and other local businesses spring up like never before, blue plaques stuck to walls all over the town, an international film festival set up shop and Beeston staking a claim as the cultural, creative cousin of our nearby big city.

So at our half-decade, we’re stopping to take stock of what we’ve done. Beeston is more about the future, keeping pace with the changes that are inevitable in a vibrant, exciting town. We have no idea what will occur in the next five years. There are the risks of a crap development in the Square Phase 2’ further draining of interest and funds from the Council, not to mention the bully-boys of the fracking industry coming to town. Yet the hope outweighs this. Never before has the town had such a sense of community, of pride, of standing up to determine our own destiny. We are proud to be some small part of that, and promise to reflect that and work hard over the next 5 years to keep Beeston special. Viva Beestonia!