Trees of Beeston #3: The wonders of the Evergreen and the Scots Pine of Beeston Parish Churchyard

Written by jadekmoore on December 15, 2018. Posted in Current Issue, The Beestonian.

For this evergreen seasonal column of Trees of Beeston, I want to celebrate those arboreal wonders that exist in our streets and gardens, public parks and along train-tracks and verges that are non-deciduous.

In particular, I want to celebrate the pine tree, which, given its connection with December and winter festivities such as the winter solstice and Christmas, seems entirely appropriate for this issue.

While deciduous trees shed their leaves in the autumn providing valuable mulch in the form of leaf litter and ground cover for hibernating small mammals and insects, evergreen trees and plants enrich our botanical landscape by retaining their leaves all year round, providing hedging and wildlife habitats. Think of the Pine and Firs, the Yews, the Holly trees and bushes, (*whispers, even the much maligned but much used Leylandii or Leyland Cypress*) the snaking vines of Ivy, or Mediterranean evergreens that have made their way into the gardens and landscapes of the British Isles such as the life-affirming herb Rosemary, the Myrtle or Juniper. These evergreens all provide cover as well as offering cones and berries for over-winter sustenance for those non-migratory birds who remain in the colder northern climates: the robins, wrens, blue-tits, blackbirds. When the snow falls, it is their needled and leaf-covered branches that hold the snow and keep the pavements below and around them less frozen and in turn less slippy for pedestrians venturing out on wintery days.

As the nights draw in, and the season turns colder in the northern hemisphere, us humans become a little more in touch with our animal souls: the need for hibernation, of taking stock, the desire to hunker down and, if we are fortunate, to take some rest and respite from the rude world, sat near a wood burning fire, a glass of something warming close by. By December, thoughts turn to bringing one particular kind of tree into the home to decorate with lights and baubles, and most often, it is the pine tree we think of.

This December column of Trees of Beeston is dedicated to celebrating the Scots pine (Pinus sylvestris/ Guibhas).  There is considerable variation within this species, and it is the most widely distributed conifer in the world, its natural range spanning the Arctic circle and ranging all the way down to the Mediterranean.  Scots pines can average a height of 20m and live for between 250 – 300 years.  In its first 60 – 80 years, the tree resembles its recognisable conical shape, as it ages, it develops a tall, straight trunk of pinkish-brown bark with an impressive canopy of blueish-green needles, giving it an attractive and striking appearance in a wintery landscape otherwise drained of colour.  Here in Beeston, we have a very impressive example. Situated next to Beeston Parish Church on the corner between Styring Street and Chilwell Road, it can be admired from the tram and buses coming into and out of Beeston interchange. Standing proud and tall, indicating it has been in its current location for over a century given its scale and maturity, it acts as landmark and physical reminder of times past and passing time. One has to look up to truly appreciate it. The physical act of looking upwards gives perspective: it is an old and valued member of Beeston, and one to give respectful dues. The Magpies and crows love it as both a vantage perch and calling point, and it is rather lovely to sit near and revere, to meet folks under, to have alfresco lunch in the warmer months, to take time under between the school run, shopping excursions or when waiting for public transport.

Medicinally, pine has been used to treat respiratory problems.

The tradition of dressing a tree to celebrate the season of winter is a long one.  Looking to the Scandinavia, stories and traditions abound: Think of Hans Christian Anderson’s The Fir Tree, a classic story, reminding us all to celebrate our talents and to make the most of our time. Closer, in the British Isles, stories are abundant. Ancient Greek and Roman lore has it that the pine tree is closely connected with fertility.  Druids are said to light fires under Scots Pines at the winter solstice to celebrate the passing of the seasons and to draw back the sun.  Tree dressing and decorating a Scots pine with twinkling lights and candles, shiny objects, and a star become representations of divine light and the eternal hope of light in darkened times. Trees dressing is a seasonal ritual bringing people together to marvel at the lights, and to ponder the hope the lights and the evergreen give. 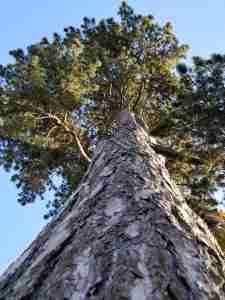 In England, Scots pines were used as landmarks for route-ways: planted along the boundaries of fields as well as along droving routes to guide farmers and their herds to markets. In Scotland, their forested form provides unique ecosystems for the rare and wondrous crossbill and a glorious unique biome for Highlands animals, as well as providing forested materials for trade and for human use.

The Scots pine has been deemed a vital construction material as the wood grows relatively quickly and its high resin content (that lovely, life-giving pine oil smell and sticky substance from the needles) means that the wood is slow to decay (think about this when you see the remains of a Christmas tree still littering gardens in March!).  The wood has been used in the making of ships: from masts to planking, while the resin from the sap of the tree was used to make pitch, to seal beer casks and the hulls of boats. Archaeologists have even found the hollowed out trunks of Scots pines used as drainage pipes. The soft pulp of a pine is also used in paper production.

Medicinally, pine has been used to treat respiratory problems, used as an inhalant as well as an antiseptic or disinfectant (which is why so many household products retain the scent of pines today).  The smell of pine needles is also one that is attached to making people feel uplifted, ideal when the dark nights and wintery weather can lead to feelings of despondency and seasonal depression.

While there are now many kinds of pine tree to bring into the home (some with bold claims of non-drop needles, or plastic varieties, which all, still somehow manage to drop their needles), it is important to think about how your pine tree might be of use beyond Christmas. If you have a garden and some space, you can of course think about buying a live tree, potting it on (not necessarily planting it out), and having it outside to enrich the local wildlife.  If you prefer a cut tree, there are still uses for the tree after the 12 days of Christmas is up. The tradition of the Yule Log is still retained in parts of this country and northern Europe where the pine tree is left to season and burnt the following winter to provide a warming source of light and heat. The smell of a pine burning also gives added pine aroma to a room.  The pine needles, once dried, can be used by gardeners wishing to make their soil more acidic – or ericaceous – by mixing them into compost or loamy soil when planting up blueberries in the early spring for summer home-grown berry consumption.

So hang the lights high, marvel at the enriching wonder of a Scots pine and its relative the festive Christmas tree, and wishing all readers a peaceful and loving Christmas and a hope-filled and tree-enriched 2019.

Appearance: Up to 80 years of age, it is conical in shape, resembling popular drawings of Christmas trees. Blueish-green pine needles flank its branches that are thin as they rise up the tree, and its trunk is a reddish-brown, solid wood. Mature specimens have tall trunks that lead to a canopy of needle cover (see the Scots Pine in Beeston Parish Churchyard).

Uses: Annual Winter festivities see the most popular celebration of the Scots pine or conifer/fir trees as ‘the Christmas tree’ being brought into homes and work-places and dressed in lights and decorations.  This continues of the ritual of celebrating the winter months by bringing in a tree and the lighting of a fire, symbolic of warmth (the yule log) and eternal hope given by the light in the extended dark nights of winter.

The Scots pine is a useful timber for making paper and the resin has antibacterial and disinfecting medicinal properties and has an uplifting smell.