I Was Beeston: Meet Beestonians from around the world

Written by jadekmoore on February 12, 2019. Posted in christopher frost, Current Issue, The Beestonian.

As those who regularly read the Beestonian will know, Beeston resides at the heart of the universe, and despite some failings, everyone enjoys living and working here.

But for some, they have found that the grass is actually greener on the other side, and so, as a twist to the ever popular ‘I Am Beeston’ interviews, we give you two examples of former Beestonians, who packed their suitcases and bought a one way ticket to a far off land.

Firstly let me introduce you to Keith Walker, who emigrated to New Zealand in the early 1960s’. “I was born in September 1932 in Chilwell, near School Lane, and remained in the area until I married in November 1959 and moved to Littleover, as I was working at Rolls Royce and my Cheshire born wife Marian was a radiographer at Derby Royal Infirmary. We decided that we wanted a better life and explored as many possibilities as possible. Canada? Too cold in winter. Rhodesia? It was the time of Ian Smith, just before it became Zimbabwe. So that was out. South Africa? They had recently left the Commonwealth and apartheid was starting, so no! Australia? Maybe. We also looked at New Zealand. It was difficult to get much information other than touristy stuff, which is all very well if you are going for a holiday, but we wanted information like the cost of shopping. It took us two years of filling forms, interviews, medicals etc, before we were accepted and given a sailing date for the six-week voyage to New Zealand on the Shaw Saville liner ‘Southern Cross’”.

“We arrived in Wellington on 19 Oct 1962. The government had paid for our passage and guaranteed employment. We went to Blenheim, a small town in the NE corner of the South Island. It is now a major wine producing area, but then it was all fruit growing. I worked for the Inland Revenue, and as a public servant, if you wanted to get on, you had to be prepared to move, and we did. After leaving Blenheim, we moved from place to place in the North Island eventually settling in Napier on the east coast. A lovely art deco city, which had been devastated in the earthquake of Feb 1931.  Marian and I split up in 1976. I eventually remarried and moved to Taupo in 1981, on the NE corner of the North Island, and have been here since. Sadly that marriage ended too. Cameron, the eldest son of that marriage lives with me now”.

I enjoyed exploring the area, looking at where I was born and where I used to live.

“Moving to NZ was a bit of a culture shock. Weatherboarded houses with corrugated iron roofs. When we arrived the population was 2.5 million, now there are about 4.7 million. Was it a good move? Definitely. The best thing I did. NZ is a beautiful place. Our land mass is about one sixth larger than the UK. Very mountainous. We have a relaxed, laid back lifestyle.  Apart from our major centres such as Auckland, towns are relatively small and miles apart. The nearest provincial city to Taupo is Rotorua, and is 50 miles away, with virtually nothing in between. Certainly these are the Shaky Isles. We have had several strong earthquakes in the last few years. Taupo is in the Taupo Volcanic Zone, a highly active geothermal area with very hot ground, and relatively frequent eruptions from the three central North Island volcanoes just south of the lake.  Taupo is a holiday and tourist destination. But it’s nothing like Skegness! It is an adventure playground, with lots of energetic activities like skydiving on offer”.

“I volunteer at a local geothermal park called ‘Craters of the Moon’. About 9 or 10 years ago, a group of ‘Poms’ arrived. I asked them where they were from. One of them said ‘Nottingham’. After a few minutes I found out he was Dave Tacey from Chilwell, and had been involved in 1st C&A Scouts, just like me. That blew him away. We became very close friends. He had tried to get residency in NZ, but our immigration people decided we have enough accountants and so he moved to Llanbedr in Wales. He visited a few times and we kept in close contact until his death last April”.

“On Dave’s last trip, he spent a day with me recording my memories of my former life in Beeston. I lived with my mum and dad for 27 years, apart from my 3 years in the RAF. I have been in New Zealand now for over 56 years, and in Taupo for nearly 38. I came back to the UK once, for six weeks in 2001. I visited Beeston for a couple of days. I found the crowds especially in Nottingham very claustrophobic and I was homesick after a month. I enjoyed exploring the area, looking at where I was born and where I used to live. Dave spent several weeks in and around Beeston a few years ago looking for anyone from my time, but was unable to. Although I have contacted the parish church to see if they had anyone in their congregation with memories of those times, I’ve had no response”.

If you knew Keith, or fancy reminiscing about Beeston with him, then please contact us, and we will let him know. 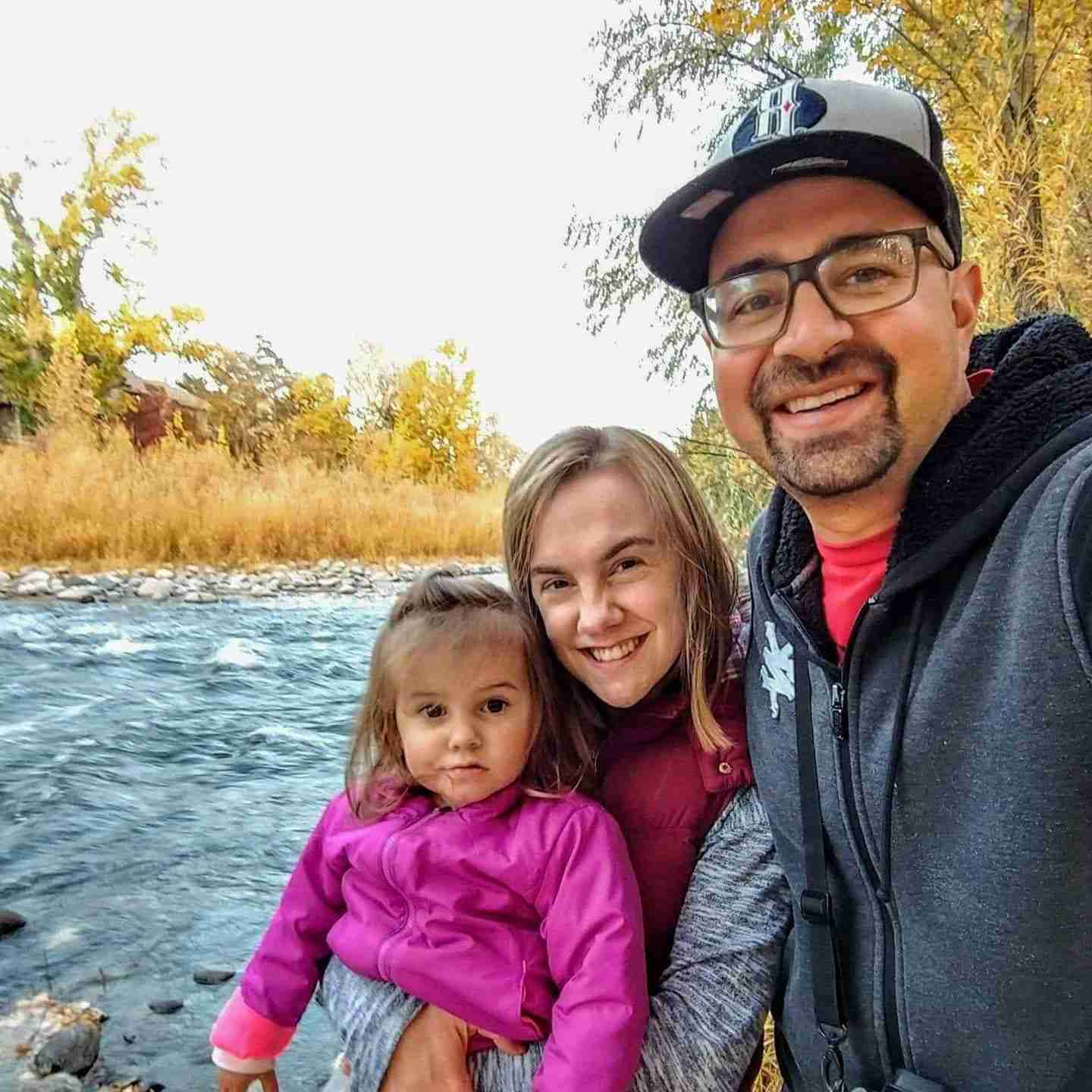 Next is Amy Roberts, who currently resides in Reno, Nevada, but would love to return to Beeston. Unfortunately due to present UK immigration laws, she can’t. But more of that later. “I was born in the QMC in February 1985 and lived in Beeston until 2003, when I attended Manchester University. I fell in love with the city and its incredible music scene. However, Beeston’s siren song was strong and after I graduated, I headed home and started my first ‘real’ job. I lived happily in my wonderful hometown until August 2011, when I headed to Satsumasendai, a small city in semi-rural Japan. I lived there for two years, teaching English to high school students and having the most incredible experience of my life, which will stay with me forever”.

“I returned to Beeston in 2013, and there I remained until January 2016. You could call me the ‘Beeston Boomerang’. This time I headed west to be with my husband Andrus, whom I had met in 2013, whilst travelling in the States.  I was working and lived with my parents. So, we made the very difficult decision that I would apply for a Green Card and move to the US so we could finally be together. This was incredibly hard for me, as all my family are in the UK, and I had a wonderful network of friends. But I accepted it, as naturally I wanted to be with Andrus. Unfortunately, it took 19 months to actually hold it in my hand, and was an extremely stressful process. By that point I had a good job at East Midlands Airport. I had been married for over two years, but had spent all that time apart, and we didn’t want to wait any longer to be together. So with an extremely heavy heart, I left Beeston, my family, friends and my job for the last time and travelled to the medium-sized town of Reno, Nevada”.

I do sometimes find myself wondering what would have happened if I had remained in Beeston.

“Reno is as different from Beeston as it is possible to get. Neon-lit casinos dominate the downtown skyline. Guns and marijuana are legal. Beautiful mountains rear up into the clear blue sky.  We get 300+ days of sunshine a year. Thousands of wild horses run free in the mountains. The stunning sapphire blue Lake Tahoe is just 45 minutes drive away. It gets up to a sweltering 36 degrees in the summer, no rain for six months but then proper, up to your knees snow in winter. It’s high, dry, harsh, but beautiful”. 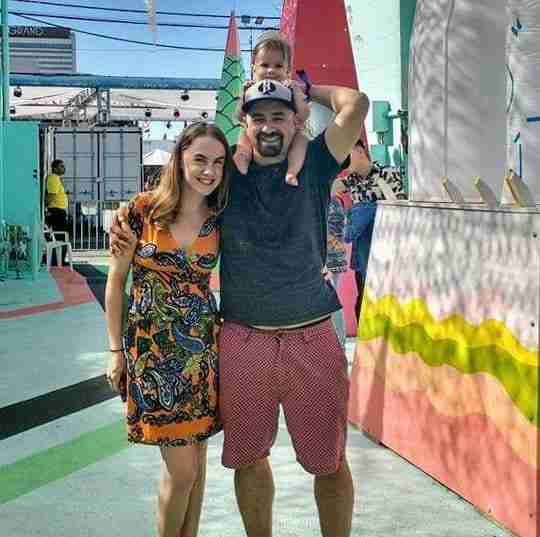 “I found out I was pregnant less than three weeks after I arrived in the USA, and had Audrey was born in October 2016. While she was obviously a wonderful gift and lights up our lives, it was and still is indescribably hard to have a child so far away from home and the NHS, in a country where maternity leave is non-existent and once you leave the hospital, you’re presented with a huge bill, but with no support. I wouldn’t recommend it to anyone. But it’s not all bad. People that I meet love my accent and are fascinated with my life story. But I do sometimes find myself wondering what would have happened if I had remained in Beeston”.

I miss being able to walk everywhere and feeling safe. I miss Beeston with every fibre of my being, and I long to return.

“It was a massive wrench to leave, but I had to in order to finally be with my husband. You see in 2012, the year before I got married, the then Home Secretary Theresa May introduced extremely harsh immigration laws. There are strict financial requirements on British citizens who dare to fall in love with someone from outside the EU, and the result is that there are thousands of ‘Skype’ families like mine, forced to live half a world away from their loved ones. Because I married an American, I either have to find £62,500 in savings or I have to earn at least £18,600 per year in the UK before I can apply for my husband’s visa. This can cost thousands of pounds and has a high rejection rate. It’s my heart’s desire to reunite my family, and I won’t stop until I achieve it. There are so many things I miss about Beeston, the vibrant town centre, the Beeman and the distant sound of the bells ringing at the Parish Church where I was christened. I miss being able to walk everywhere and feeling safe. I miss Beeston with every fibre of my being, and I long to return”.

“As I have no other way of raising the money needed for my husband’s visa application, I created a ‘GoFundMe’ page. This has been featured in the Nottingham Post and Daily Mirror. I hate asking strangers for money, but if my story has struck a chord, please, please help me get home. You can find my page at https://www.gofundme.com/4ptaah-please-help-reunite-my-family