Written by jadekmoore on February 26, 2019. Posted in Current Issue, The Beestonian.

It seems only fitting in this Trees of Beeston column to consider how the natural world, its biological systems and lifeforms, can give pointers to humans about valuing the interconnectedness of the local, the national, and international. Of the way nature abhors borders and boundaries, and demands fuller realisation by making connections with other places.  Plants and seeds serve as symbolic of hope: the seeds of an idea, the green shoots of new growth. The culture of sharing plants and trees across scale and between countries in terms of landscaping urban planning further exemplifies how human cultures and lives, and the animals that live alongside, can be enriched and life possibilities expanded by such exchanges of flora.

As a geographer, studying the world and its human and non-human interconnectedness is at the heart of the subject: how people and the environment are part of wider interdependent systems of life and life forms. And so it is that I bring you two tree-based sculptures, one living and growing, one formed of a once-living tree, fashioned as a reminder of the need for humans to remember their connectedness to the natural world and to each other. Both tree forms are located in Dovecote Park, and they are the European Union (E.U.) tree circle and the Yew Green man of Dovecote Park. 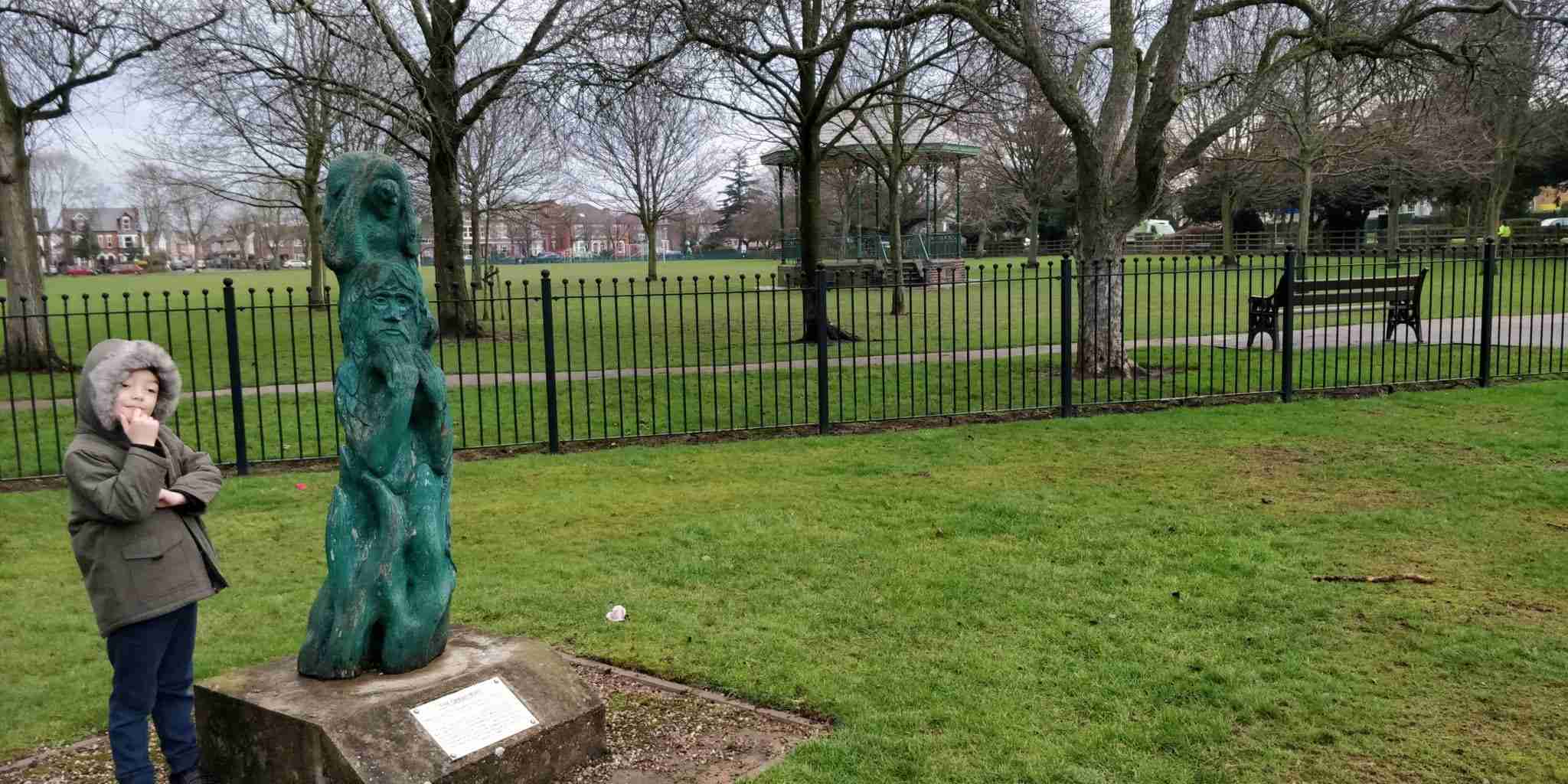 Encircling the bandstand of Dovecote Park, the E U tree circle acts like a fairy ring of twelve trees.  Each tree is a Norway Maple (Acer platanoides) a deciduous tree native to mainland Europe. Each one represents one of the twelve Western European Union member countries who had joined by the E U by the mid 1980s prior to the additional member states joining in the intervening years since the tree ring was planted in January 1993 by members of Broxtowe Borough Council’s Technical and Leisure Services Committee. Ornamentally, the Norway Maple is planted as a shade-giving tree, and certainly they have provided that to many picnic-going Beestonians attending events at the bandstand in recent summers.  As current debates rage around Britain’s political, economic and social membership of the E U, this tree circle serves as a reminder to the power of collective connection and endeavour, to look back to the past, to the cooperation and benefits of being connected to other parts of Europe and the world; and how trees have often provided a way to illustrate vital human kinships across national borders.  Think of the Norwegian spruce, gifted to Trafalgar Square every December, or else twin-town gifts of memorial trees planted in villages and towns up and down the British Isles by way of recognising civic friendship across the world. It is a reminder that our towns and cities are often enriched and benefit from landscaping ideas, such as tree-lined streets, stretching back to the Victorian era from landscaped parks and gardens across the globe, but in particular influenced by urban planning initiatives from France, Germany and Italy (Johnston 2017).  Such tree planting symbolises the desire of the people and place in which they are located to forge social, economic and political connections from the local to the global, marking an expansive vision of a more welcoming and humane world.

Dovecote Recreation Park was gifted to the residents of Broxtowe in 1908 and ever since continues to be a much loved and well used green space.

Plants and trees symbolize growth and fruitfulness. Gifting plants is a common enough practise. If one has the privilege of having an allotment or garden, consider how many plants or seeds are exchanged to enact knowledge exchange and friendship, to share the bounty and joy, the hope and growth promised in a single plant.  These small acts make landscapes more inclusive, more friendly, and serve to symbolize a humanity and humility. Hopeful acts from the past, living in the landscape of the present, signposting possibilities of hope for the future. 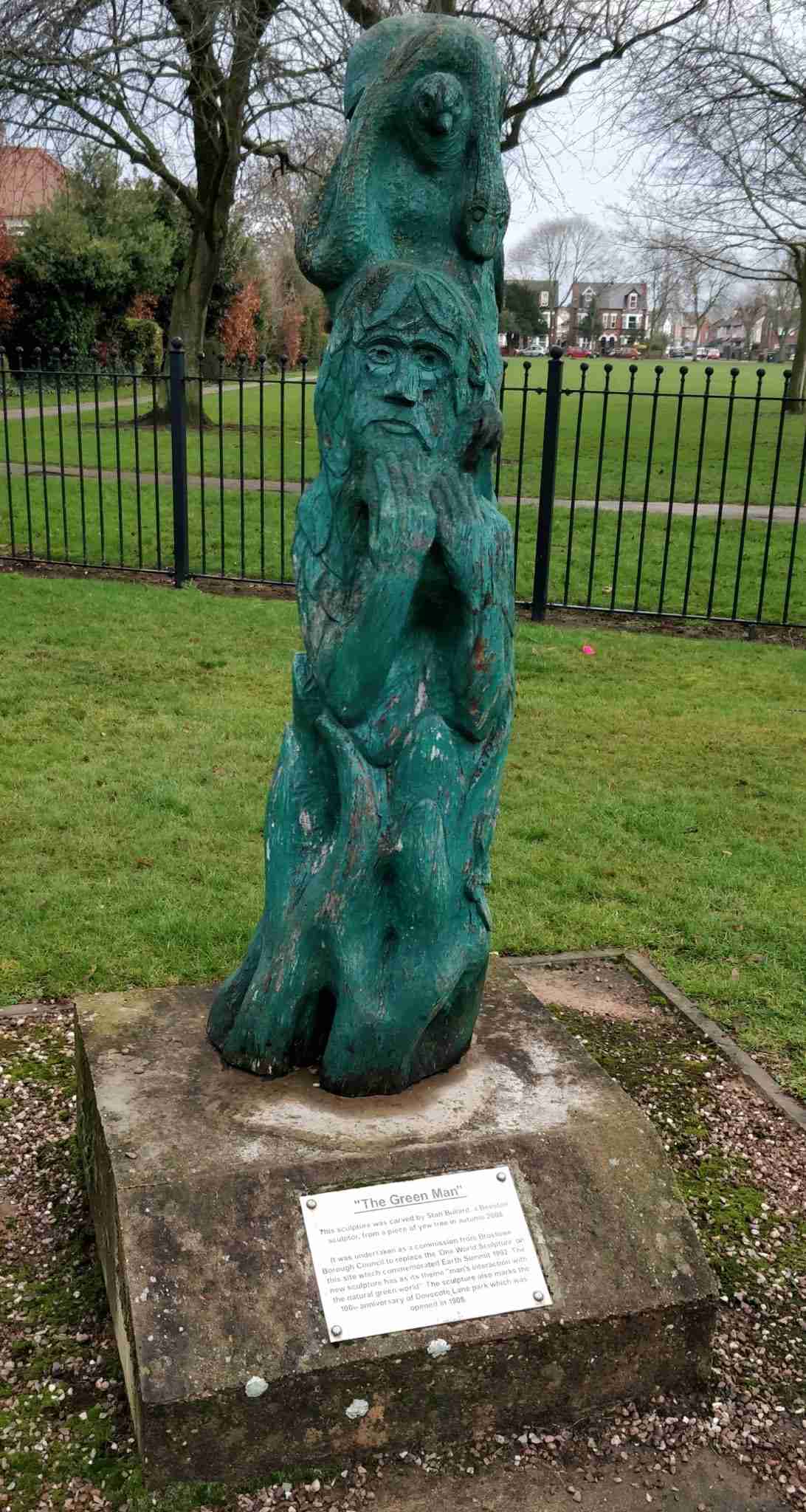 Green spaces such as parks also offer up much needed connectivity to the non-human world, for the mental and physical wellbeing to people who are able to avail themselves of it.  Dovecote Recreation Park was gifted to the residents of Broxtowe in 1908 and ever since continues to be a much loved and well used green space to residents for a variety of purposes: from those who once or twice daily walk their dogs, take their daily exercise, meet with friends to play, or simply as a space through which to wander and ponder life. To mark its centenary in 2008, the local Beestonian sculptor Stan Bullard (who used to have a striking totem pole in front of his house/studio on Dagmar Grove), carved the statue of the Green Man out of an old Yew trunk.  Replacing a previous statue on the site which commemorated the Earth Summit in 1992, the plaque tells how Bullard’s green man symbolises “man’s (sic) interaction with the natural green world”.  Carved from a found Yew tree trunk, Bullard’s Green Man is in thoughtful pose with a variety of insects, birds and animals surrounding him.  The sculpture gives afterlife to a tree (The Yew itself having many spiritual connotations to do with protection and the afterlife) and serves as reminder to those who see it of the need to be thoughtful of humans and their responsibility as custodians of the natural world, to live sustainably. It serves as reminder that our actions have consequences, and that what we do to the natural world, we ultimately do to ourselves.

In studying these two tree sculptures, new ways of seeing the other trees in the park become apparent.  Dovecote Park is blessed with a variety of trees: there is a stunning Oak, its branches reach out and provide glorious shade if one attends formal activities or has a picnic in the summer months.  There have, however, lately been a number of notable losses in the park: three trees that once stood near the Dovecote Road entrance have been felled as have the height of a number of poplars that once stood near them.  This removal also serves as reminder that our trees and our green spaces need to be cherished and valued for the priceless gifts they afford residents and visitors to the park, and that we have an ongoing responsibility to maintain and ensure their preservation.