The carnival is over (but only for this year)

July 11th was meant to be the day of the 15th Beeston Carnival. But due to Corvid-19, organisers Lynda & Pat Lally, made the extremely difficult decision in early May to cancel this year’s festivities. To find out how difficult this was, and history of the carnival, I contacted the dynamic duo for their thoughts on having to postpone one of the town’s most well-loved and visited events. Due to the ongoing pandemic, I sent Lynda a series of questions, and here’s what she had to say…

“During my year of being mayor (2005/06), I had seen how some parts of Broxtowe were still very much communities and thought that my own hometown was losing this, and so our motto for the carnival became ‘Bringing our Community Together’. We have a come a long way in those fourteen years, from having a budget of £250 and the kindness of groups like Beeston’s Oasis Christian Centre, the Scouts, Air Cadets, and various other community-based organisations. Not forgetting Beeston Pipe Band, who performed for free to kick start the revival of the carnival in 2006. Most of these groups are still with us, and many more support the event annually. It is showcasing all the things that are great about Beeston. 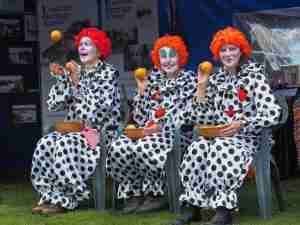 “We have been through one of the boxes filled with newspaper cuttings about the carnival. It’s been an incredible 14 years and we have touched so many people’s lives and given some platform to go forward in life with, whether it be to follow their passion or just to raise the profile of a charity and raise some money for many charities in the community. After searching back, we found pictures, videos and Pathe news stories going back to the 1930s.

“Then it was a two-day event over a weekend, with band competitions and a very regal Queen being driven around on a special Bartons queen mobile! The films are on YouTube, and it’s amazing to watch. We never realised how near we were to doing things in the same vain. Beeston businesses sponsored it, bands played, local groups all came together and there was a huge walking parade which spun around Dovecote Lane. The event itself was held at the rugby ground on Ireland Avenue. The Carnival Queen’s cape was made and paid for by local businessman Walter Hayes. It was an extravagant piece, even though times were tough back then.

“I think the biggest thing for us, when reviving Beeston Carnival, was giving the chance to highlight the work that all these amazing community groups do. Mostly run by volunteers. It’s something that makes our town and our community. That, and more importantly, to make them some much-needed funds. It has always been a small team that brings such a huge annual event together and some who started with us back then, are still there holding it all together. I would like to thank them all, as without them we would not have survived for this long. 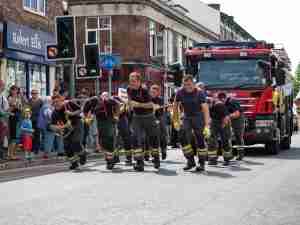 “You would think that in July we would be reasonably safe with the weather, but we have had many rainy carnival days. Most we have survived when eventually the sun came out. The one that comes to mind which nearly made us postpone was the 2007 event. After continuous rain for weeks, it didn’t stop on Carnival Day. It was touch and go as to whether we could proceed safely. But with a few stalls and groups turning up, we managed to proceed.

“As ever, the public came out to support the event and the very wet parade and entertainment in the park went ahead.

“Last years was a bad one for us, and it nearly ended Beeston Carnival for good. Pat and I, and our very capable volunteers know one thing, and that SAFETY is our main concern.

“I am immensely proud of the way we have always handled the safety of all of the carnival days. So it was with great concern when we were told that the carnival had to pay a traffic management company to manage our parade, even though most of the walking parade is on a pedestrian walkway. Roads needed to be shut off and diversions put in place. This would have caused huge traffic problems, admin fees to be paid and so it went on. There was a great deal of public support for us when it seemed the only way forward was to pay over £2000 for the very important part of the carnival to proceed. I was adamant that if the parade couldn’t proceed, the carnival wouldn’t either. But some common sense was applied, although it had its implications and our stress levels were very high. How is that Red Tape can seek to destroy wonderful community events like this? Some may argue that is necessary. I couldn’t possibly comment any further!

“2020. Well, here we are faced with another dilemma. The Corona Virus. Who could have guessed that this would stop our wonderful annual community event? Yes, it was a big decision to cancel, and we talked to our volunteers for weeks, wondering if things would improve and we could go ahead. However, we knew that eventually, we would have to make the decision to cancel, like so many other groups and organisations across the world, who have had to cancel their events.

“Who knows where we will be next year? And for all those who run events in and around our community, we can only hope that things will return to some normality, for the sake of bringing our community together once again.”