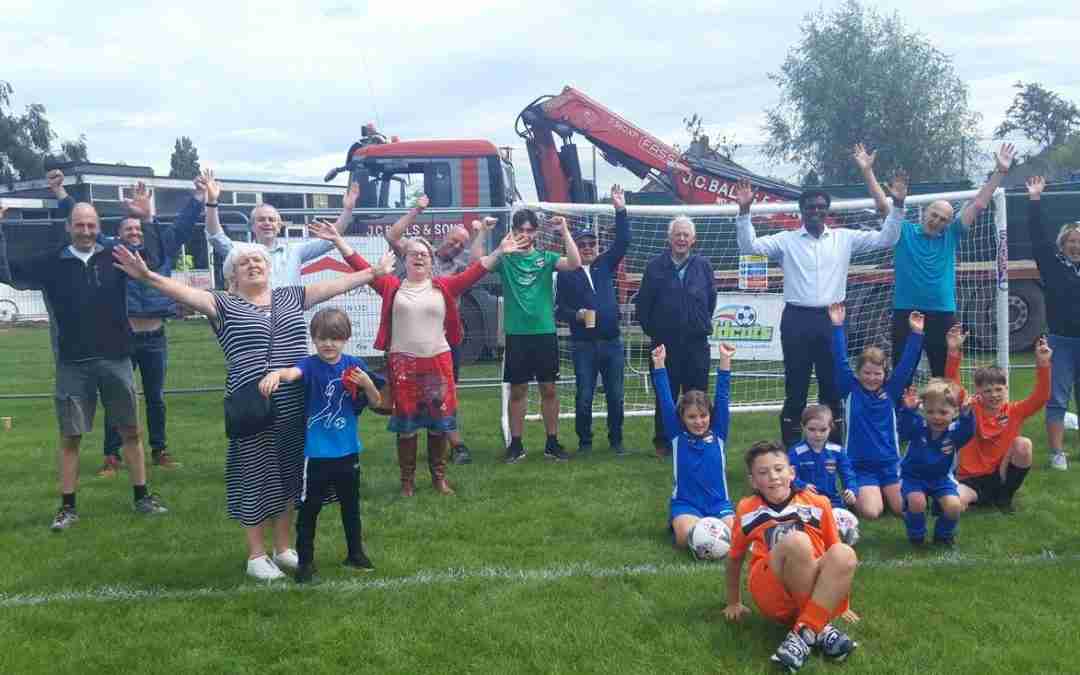 It has been a long road but Beeston FC have finally reached the total needed to build a new clubhouse and renovate the old Plessey sports ground at Trent Vale.

We have been covering the Bees for several years now during which time they have been trying to raise money to receive a grant from the Football Association and the Premier League.

The near £500,000 grant will cover a large amount of the £600,000 cost of the project which will benefit both the club and the local community.

A statement from the club’s development officer, Sarah Green, read: “It’s fantastic seeing work begin on our clubhouse. The years of planning and fundraising by our hard-working volunteers have finally paid off. You can see a real transformation of the old building and the rooms are taking shape. We aim to maintain the history of the building by reinstalling the iconic Plessey Sports Club clock outside and displaying old photographs and articles inside when the work is completed in spring 2021.

“The community room is huge and will be such an asset to local sports, social and community groups in this area – especially now that social distancing demands larger rooms. There’s still work to do, and we are greatly helped by our community partnership with the Beeston based company Reckitt Benckiser who are working hard to continue our general site tidy up, replanting and internal painting of the clubhouse in the new year.”

Long term Beeston residents will know that the site has plenty of history to it and none more so than Ray Walker who used to feature for the old Plessey football team whilst his daughter went on to play netball at the same location.

With the site having been abandoned for decades, Ray is delighted to see that work is beginning to hopefully bring the ground back to its former glory.

He said: “I’m glad that somebody picked it up.

“I would love to see it help to build a strong Beeston team.”

“I think Jack Charlton said it best, ‘the one thing I couldn’t do was play, but I could stop other people playing.’ That was me.”

Football runs in Ray’s family with his father and grandfather making appearances for Notts County and Nottingham Forest respectively.

Although Ray himself never played at the same level as them he believes that his athletic abilities made him a match for anyone.

“I was never a great footballer.

“I think Jack Charlton said it best, ‘the one thing I couldn’t do was play, but I could stop other people playing.’ That was me,” recalls Ray.

“Being six-foot-three, I was a very physical player.

“My school always wanted me to play Rugby, the headteacher even tried to get my father to convince me, but it was because of my Dad that I wanted to play football.

“Looking back, I now realise that Rugby may have been the better way to go,” he admits.

It’s easy to see why Ray thinks that.

After initially giving up on his dream of becoming a professional footballer when he was 21, Ray returned to the game in his late twenties to play for a club in Long Eaton, however, his playing days were cut short after suffering a serious leg injury.

“I went into a tackle which I now realise was a bit silly,” Ray says.

“It smashed my leg up.

“I was in hospital and they operated on it, screwed it all together again and said no more football for you!”

It wasn’t all bad news for Ray though.

“The sick pay from the government wasn’t taxable, so I was better off financially from it.

“I got two or three quid a week more than what I was earning at the factory.

“I also got a pay rise shortly after because I’d just turned 30,” he chuckled.

Characters like Ray have special memories of Trent Vale. Now it’s Beeston FC who have the chance to create even more.