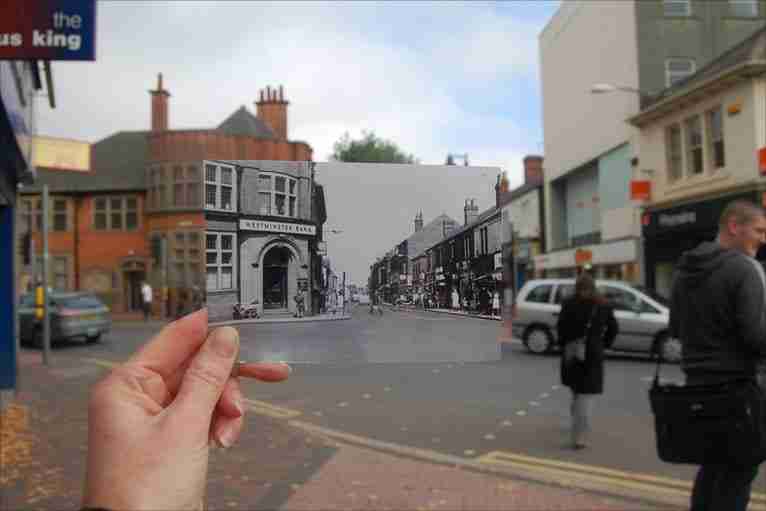 I haven’t lived in Beeston for many years although I was born and raised here.

I was born in Chilwell, just across the road from the Charlton Arms and in 1936 or ’37 (I don’t exactly remember, I was about 4 years old) my parents moved into a new house on Queens Rd West, close to Chilwell Manor Golf Course and across the road from the field at the rear of Barton’s garage where I and my mates played among the piles of old tyres left there.

In Sept 1937 I started school at Church St School just behind Beeston Parish Church. Now, I am left handed and every time I picked up a pencil in my left hand, I was rapped over the knuckles. After three months of that I developed a severe stammer so I was removed from there and went to Park Lodge, a primary school on Park Rd just along from the Hop Pole on Chilwell Rd Beeston – or High St Chilwell, as the pub marks the change of name. It was only a few minutes’ walk from home up what I see is now called Wilmot Lane but all the time I was there was called Factory Lane. Myford’s Lathes were made in the semi derelict buildings at the top of the lane and opposite the Hop Pole.

We played in Barton’s field, in the golf course and around the Attenborough Nature Reserve which we knew just as ‘The Gravel Pits’

Because of my stammer I had several years of speech therapy and elocution lessons which eventually ‘killed’ the stammer. They also changed my accent somewhat so these days no one can tell exactly where I am from, it is what a friend described as a ‘generic Northern accent, could be from anywhere north of a line from Bristol to the Wash.’

During the war, it is surprising how much freedom we kids had after school. There were relatively few people around, most men were in the Forces unless they were in essential industries, Police and emergency services. We would wander for miles and as long as we were home for dinner, no one seemed to worry. We played in Barton’s field, in the golf course and around the Attenborough Nature Reserve which we knew just as ‘The Gravel Pits’. Certainly in the early part of the war we had plenty of air raids when we had to leave home and go to the shelters which were erected all over the place. The nearest shelter to home was about 100 metres along the road towards Beeston. The warning was warbling sirens from all the factories and the All Clear after the raid was a steady note from them. Even after all these years, if I hear a warbling factory siren, my stomach does a little flip!

In 1943, there was a severe scarlet fever epidemic and hospital buildings kept for a possible smallpox epidemic were opened to isolate those with scarlet fever. I got it and was put in hospital somewhere near the old City Hospital. My parents visited me twice a week: they were not allowed to actually enter the ward but stood at the closed door and we talked through the glass. I was always given a big bundle of comics and magazines which my dad collected from his workmates. He was one of the managers at Ericsson Telephones factory. I had ‘complications’ so spent 13 weeks in the hospital. They were Impetigo, scabies, ringworm etc, all skin diseases caused by poor hygiene in the ward and as a result I was unable to take the 11 Plus school exams. Nothing from the hospital ward was allowed out while we were ill and for that 13 weeks, 7 days a week, dinner was Irish Stew and Rice Pudding. It was years before I could face either of those dishes again!

The 11 Plus decided whether you went to a Grammar School or a very basic Comprehensive School. As I couldn’t take the exam, that would have meant the Comprehensive School so my parents sent me to West Bridgford High School on Musters Rd, a private school owned and run by Mr and Mrs Caro. I don’t know what happened to the school after I left but I found it had been closed some time when I was in Nottingham some 16 years or so ago.

I well remember the big floods of 1946 and ’47. The school was closed for a month on both occasions. The 1947 floods were the worst, Ericsson’s factory was surrounded by water, there was a wall round the site which with pups running all the time, kept the water out of the factory. To get people to work, double deck buses would run through the floods with extensions to lift the exhaust pipe out of the water and the workers would ride on the upper deck. My dad told me later that when the waters had receded enough to turn the pumps off, there was sufficient fuel left for around another 12 hours or so.