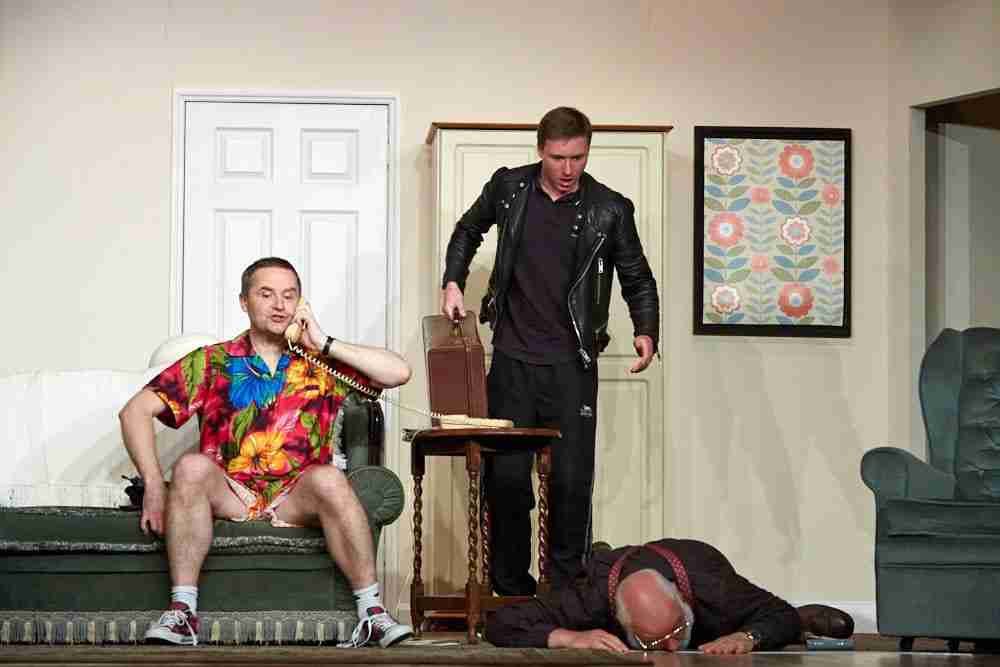 She invites me inside, makes a drink, and I ask how last night went. She sips her tea and smiles proudly.

“It went really well. I thought it was the best they’ve ever done it.”

Well, only six hours later, when I’m watching Barbara and the Beeston Players’ second performance of Caught in The Net, I can’t agree more. But we’re not there yet. It’s still just Barbara and me sat on her sofa, drinking tea.

When I asked to speak to the most longstanding member of The Beeston Players I didn’t realise just how far back they went. The troupe started in the late sixties, with Barbara joining in 1970 after being invited by a friend named Elson to see them do Noel Coward’s Red Peppers.

“We used to go drinking in the Crown. Elson was in there. He was in the group, we got chatting, and he asked us if we’d like to go see it, and I really enjoyed it!”

It seemed Barbara was smitten, with the theatre at first anyway. “Red Peppers was very funny! It was just two people, Elson and Anette in the main parts. There was singing and lots of arguing. It was a lovely play.”

Shortly after, Elson invited Barbara to get involved.

“I dragged my sister along because I didn’t want to go alone, but we were welcomed with open arms.”

“Well, I had a sowing machine and she was a commercial artist.” She laughs. “Within a week we’d already got jobs backstage. I was doing costumes and she was painting sets. We fitted in quite well!”

That was the beginning of a passion for all aspects of theatre that lasts to this day. Barely a year later in 1971 Barbara was given her first part, playing a 14 year old schoolgirl (she was 23 at the time!) in Peter Shaffer’s Five Finger Exercise.

Later I’m sat in the hall of Round Hill School, looking out over a packed crowd and I have to say, I’m excited. Then there’s silence as the curtain rise slices through it. I’m not going to go into detail about the plot (this isn’t a review of the play, but I loved it), but as a comedy farce, Caught in The Net is full of slapstick, mistaken identity, word play, and more twists and turns than an M. Night Shyamalan movie.

For the better part of two hours, I laugh and snort and even have my heartstrings pulled, and then as the final curtain drops I join in with the humongous applause

The whole play is superb. Samuel Williams is excellent as father John Smith caught out in a lie and trying desperately to cover himself. Noreen Boyle is eerily good at playing his 15 year old daughter Vicki, veering perfectly from sweetness to temper tantrums at the flick of a hat. Sue Frost, Jill Griffiths, Alistair Hudson and Kai Robbins are equally funny in their roles as well. But the standout for me is Gary Frost who, whilst not being the central character, carried much of the play himself. Gary is an absolute joy to watch as “uncle” Stanley Gardener, Smith’s hapless but thoroughly likeable best friend.

For the better part of two hours, I laugh and snort and even have my heartstrings pulled, and then as the final curtain drops I join in with the humongous applause. Out of five stars? I give it a… Wait, I said this wasn’t a review didn’t I? Ah screw it. Five out of five!

So it’s hours earlier and Barbara has positively wowed me (as the play will later on). Since joining in 1970 she has been everything from costume maker, set designer, front of house, group secretary (which she still is), right through to actor and director. It was even through the Beeston Players that she met and married her husband Elson Barton, on September 15th 1976.

There have of course been highs and lows, stellar performances and bad ones, members come and gone, high turnouts and low turnouts. I ask Barbara for a highlight of her long career. She’s not sure if it’s a highlight, but the memory of one memorable evening springs quickly to mind.

“It was ’95. We were doing J.B. Priestley’s Dangerous Corner, and we had a superb actor for the major role; Robert Caplan. Well, on the first night he seemed fine. The second night he said he didn’t feel too good. The third night I had a phone call from his wife to say ‘He’s got a temperature of 104 and won’t be able to come.’”

“I remember looking at Elson and saying ‘What are we going to do?’ We didn’t have anybody else. No understudy. Elson said ‘You’ll have to do it.’

“’Yes you can. Put on your trouser suit, and get out there with your book.’”

What a story! With that Barbara says goodbye. She’s planning on spending the afternoon with her grandson before tonight’s performance. I hope I can make it, I wonder if it’ll be any good?

The Beeston Players will return in November with Disposing of The Body.