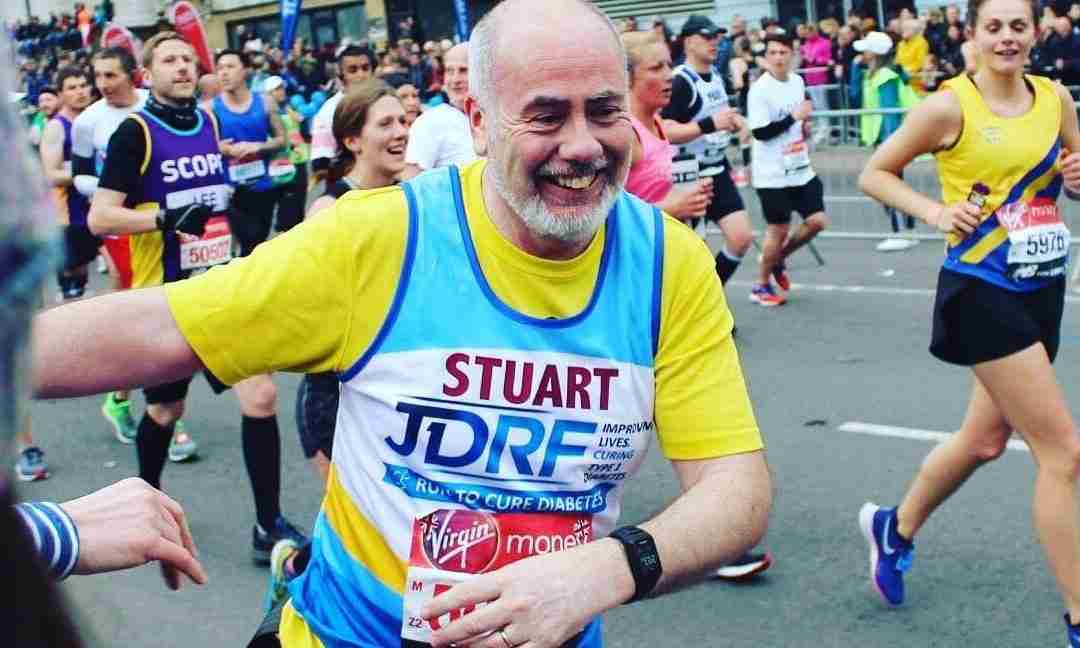 Regular readers will remember that Beestonian Stuart Baird was preparing to run the London Marathon in aid of JDRF, a charity who are carrying out vital diabetes research. I got back in touch with Stuart to find out how he did and this was his response…

My total raised was £3200. I was in a team of 145 runners for JDRF and just before we set off running, we met for a photograph at Greenwich park and they told us we had raised over £400,000 collectively. This is a great contribution to the clinical trials which are working towards a cure for type 1, and interventions to make kids lives healthier until that cure is found.

As for the run. Wow. If you are contemplating it and think you can do it – go for it. The support is just off the dial in London. Everyone shouting my name from the first hundred yards and for the next 4hrs 42 minutes of running!

I got in ‘synch’ at one point with a few runners and chatted with them. You meet such amazing people along the way. Because of this, I was in synch with a guy surrounded by high rise offices, I had lost track of mileage and as we turned right we both said together, ‘Oh, wow!’ – We had stumbled onto Tower Bridge (the halfway point) by accident. I may have got something in my eye at this point.

This is where the official cheer points are for all the charities – JDRF (including Helen, James and Will), Macmillan, Tommys, Dementia, Cystic Fibrosis etc – thousands of people looking for their team but supporting anyone and everyone. The noise went up several levels.

A couple of miles further down the road, the runners go down an underpass where no supporters can go, all you can hear is silence and runners feet for a quarter mile, but then you turn left and up the ramp out and you’re in the city again. The high rises have tiered walkways so the noise hits you as if you’re a footballer coming out onto a stadium – unbelievable. Again, lump in the throat time.

“Those in the room all stood and clapped.”

I did a good pace until 20 miles and left myself 1hr & 10 mins to do the last 10k (6 miles.) I have been known to do this in 52 mins so I thought all is good. I had forgotten all the advice about fuelling – you are meant to take gels from 6 miles onwards every 20 mins because if you deplete your body and leave it late, you just feel sick all the time.

I ran/walked the last four miles. More than that, I wasn’t aware that as part of the whole JDRF team (which was much bigger than my small part) the charity put on a reception in China Town and as we came into the room, there were official cheerers and those in the room all stood and clapped. There was loads of food and a sports massage. I was made to feel very special but more than that I was very aware I was just one bit of a huge team, organisers, supporters, families and friends to raise that amount of money.”

Congratulations to Stuart from everyone at the Beestonian for his superb efforts.