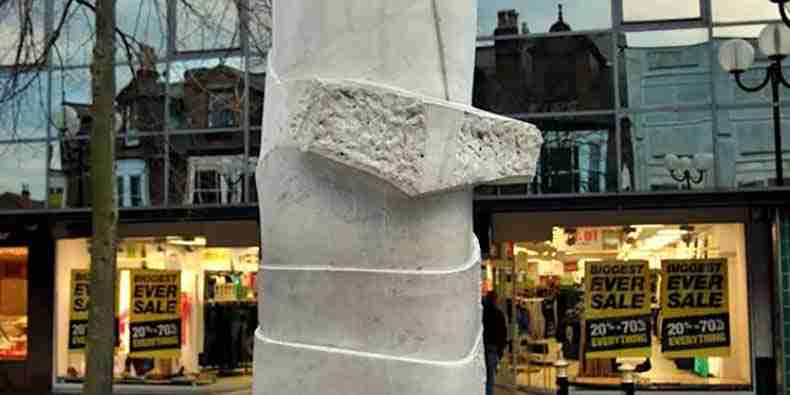 If ‘The Beeston Seat’, (the Beekeeper) is a much love piece of ‘public artwork’, there is a second modern sculpture in Beeston which is largely reviled and ignored. Since it installation in 1989, thousands of Beestonians have walk past it by without a second glance. It is certain that today, very few even know its name or troubled history, yet it cost the ‘public purse’ £25,000 and is the work of the award winning artist/sculptor Paul Mason (1952-2006), – considered by some to have been; “….probably the most important sculptor of his generation in the Midlands”. (Professor David Manley). The work of art in question is the ‘Water Head’ sculpture, which stand on the western side of ‘The Square’ in-front of the jewellers shop. Its story begins not in Beeston but in Nottingham.

In 1985 the pedestrianised Lister Gate in-front of St Peter’s Church in Nottingham city-centre was being redeveloped and Nottingham City Council commissioned Paul Mason. According to the Nottingham Evening Post (Dec. 1955), Mason’s objectives were to produce a work that was; “…. contemplative and tranquil, to induce calm in a busy city”. Taking a year to complete at the cost of £23,000, the result was a marble water-sculpture entitled ‘Leaf Stem’.

“Someone seems to have gotten the ‘plumbing’ wrong and when it was first activated the artist’s desired effect was not quite achieved.”

Returning to Beeston, once again we find change, this time the refurbishment of The Square in 1988/89, at the heart of our story. Early in 1989, on behalf of Broxtowe Borough Council, Mr Barry Protheroe handed Paul Mason the commission, to produce a public work of art, – similar in design to the Leaf Stem in Nottingham, – to stand in the newly refurbished Square. The results were yet again an organic shaped tall pillar of white marble. This time Mason christened his work ‘Water Head’ in reference to the gently flowing water, which in theory was meant to run down the exposed surfaces. Unlike its Nottingham counterpart, Water Head was originally fix into the ground directly over a drain for the recycling water, rather than being on a low stepped plinth.

Both the Beeston and Nottingham installations relied on the visual aesthetics of the play of light and water on their sculptured surfaces. Whist Mason might have been considered an acclaimed artist, his engineering skills and knowledge of hydro-dynamics were found to be some-what lacking. Someone seems to have gotten the ‘plumbing’ wrong and when it was first activated the artist’s desired effect was not quite achieved. It may have been the way in which water splashed ‘passers-by’ instead of flowing gently into the drain which generated the dislike of the sculpture, as much as the fact that when the pump was turned off, it was no-longer the spectacle it was meant to be. The Leaf Stem in Nottingham also suffered the same problems with its water flow and drainage. The water quality of both pieces of art were investigated by Environmental Health and found to be lacking. Both water-features were officially deactivated in 1994, (although Water Head was seldom in operation). For a time Leaf Stem disappeared only to be reinstated on a raised flower bed a few yards to the north of its original site, where it can be seen today. Water Head was re-mounted on a square brick-base in an effort to achieve better drainage.

The concepts and beauty of modern art are very much ‘in the eye of the beholder’. Call them ‘Philistines’ or what you will, when the Water Head was unveiled to the public it received ‘lukewarm’ attention to say the least. The Beestonian magazine labelled it the ‘Stump’. When the water-feature was deactivated, it became a favourite place for The Square’s local pigeon population to rest, earning it the nick-name ‘The Pigeon Perch’. With the coming of the Trams and The Square’s redevelopment, the future of Water Head once again hangs in the balance. There are those who would like to see the redundant sculpture gone for good. The writer is not in this mind as it seems a great shame that Beeston should loose a valuable, – in all senses, – piece of public art-work by a well-known artist like Paul Mason. Perhaps the local authority should find a new, more suitable home for it somewhere away from The Square and with a little care, planning and engineering, reactivate the water-feature. Only then can Water Head be seen and appreciated as the artist intended.