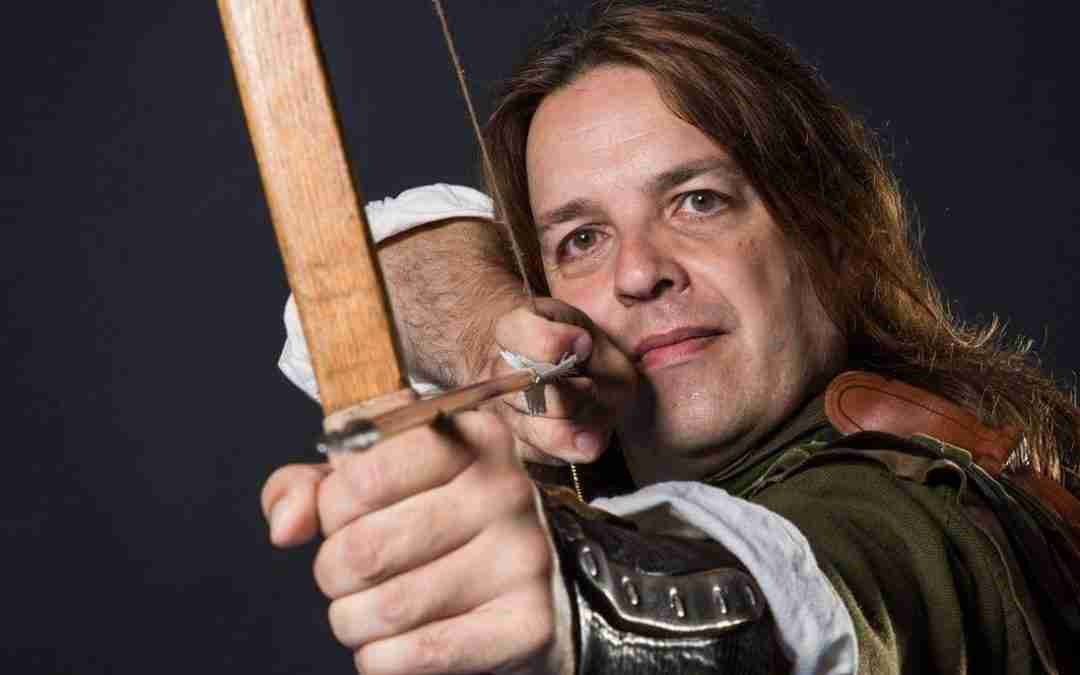 The sun is out, it’s warm enough weather to walk my daughter to school without a thick coat on – and this very morning she decided to ditch the shirt, skirt and cardigan and wear a summer dress instead.

And it’s not just because of that I can tell things are changing in the world (or at least my tiny part of it) as for the first time in literally years I’ve been getting actual, physical , turn-up-in person Robin Hood gigs! Lockdown and Covid haven’t been good for anyone socially, but for performers, entertainers and musicians it’s been a nightmare; I did a few online things, like a guest spot in the Treetops Hospice video pantomime and a fair few Zoom interviews, but the last big public event was the twice-postponed, rescheduled and ultimately cancelled Robin Hood Pageant back in 2019.

So imagine my joy when I got the call as few weeks ago asking me to take part in the return of the St. George’s Day parade in Nottingham, not just a celebration of England’s national day but a celebration of celebrations themselves. As before, we’ll have St. George and his companion knight astride their mighty steeds representing the country, Robin Hood representing Nottingham and countless supporters parading with us into the Market Square – the big concern will be worrying about the weather, and for once that’s a great position to be in.

There are certainly some people who may still say it’s too soon, that the increase on Covid cases reported today (up to one in sixteen people apparently) means we should be more cautious – and I can see an argument for that. It’s true that hospitalisations are creeping up and there are significantly fewer masks to be seen on public transport or at other events.

Scarlett and I were lucky enough to see the magnificent production of Jeff Wayne’s THE WAR OF THE WORLDS at the Motorpoint Arena a couple of days ago, due to the friends who’d bought the tickets for themselves testing positive; their sad loss in not going was our gain as Scarlett absolutely adored it from start to finish – but no-one there was wearing a mask, including us. Hopefully as society, the country and the world learns to live with Covid we’ll still be aware of the issues it causes but as the effects for most people lessen we can focus more on keeping the vulnerable safe.

And as another sign of this, Scarlett is off this weekend to a schoolfriend’s birthday party, a young man turning seven who’s last two birthdays have been just him and his Mum and Dad (great though they are, of course). This time he’s having a Star Wars themed do in a hall and hopefully having a whale of a time, enjoying all the fun of running around with other kids, lightsaber fights, using the Force and eating cake. Not that cake is a massive part of the Star Wars saga, unless you count Leia cake…*

And that joy is inspirational – Scarlett’s wide-eyed amazement at seeing a giant Martian tripod with real flamethrowers, her friend’s excitement at actually having a birthday party, and my happiness seeing that and being able to enjoy springtime in what seems to be a revitalised Beeston, walking in shirtsleeves, seeing the changes in the Nature Reserve and elsewhere and thinking how lucky we are to live in this wonderful town, a place where (unless you own a bike or need a wee) life is pretty good, and hopefully getting better.

*I apologise. But at least I didn’t say he’d gone from SOLO birthdays to having a Star Wars party.