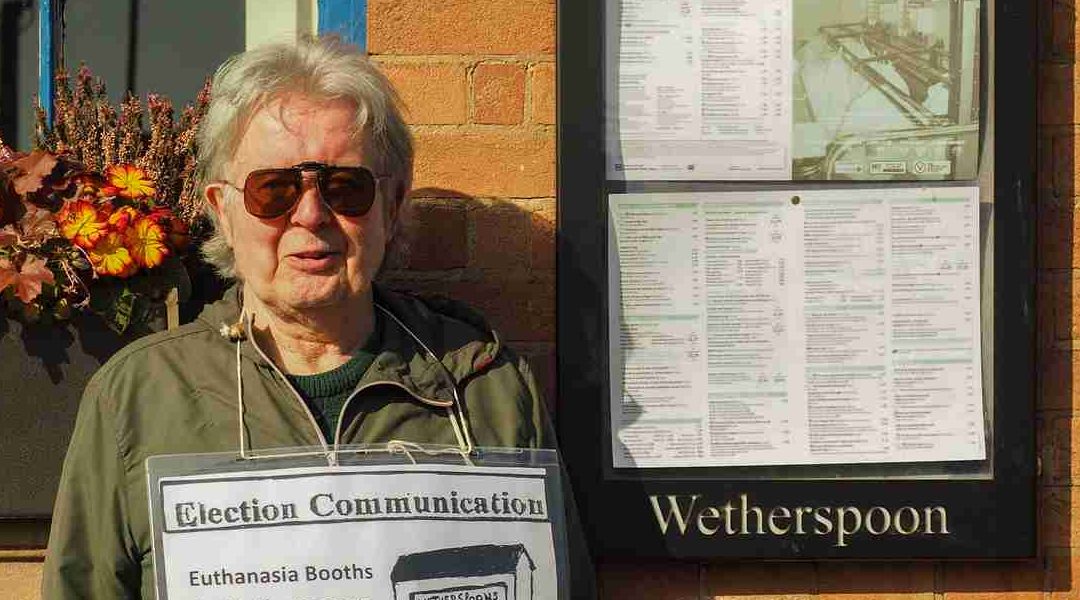 Around the time this magazine was in its planning, I went for a drink with two journos, Erik and Alistair who were then both working at the Nottingham Post. We meet at The Crown, and Erik says “Shame Dave didn’t come” to which I say “Who” and Alistair says “Bus Pass Elvis. The other Lord B”

The following, therefore, is not an obituary.

I would go on to meet Dave 3 or 4 times, exchange perhaps a dozen emails and texts (apparently narrated by him, typed by others). I do not profess to know him. On news of his death, I was asked to comment or give contact details of his relatives. I can do the former, mindful it is a secondhand slither; I am as ignorant as the next person regards the latter.

2019, and an election is called by Bloviator In Chief Boris Johnson. Parties scramble to select a candidate – the curiously vertebrae-free wannabe gerrymanderer Darren Henry goes on to win, almost by default.. But before a ballot hits a box I get a call.

“Ayup Matt, Dave here, Dave Bishop. You’re the Lord Beestonia, yeah? Can you do us a favour mate?”

Well of course. I’d observed his career from a distance: his multiple attempts to stand for elected office from local councillor and MP, through his Church of the Militant Elvis Party and its many iterations. He routinely came last, but with a couple of notable successes where he’d squeak ahead of an established party. His manifestos were bizarre satire, full of yetis, public toilets, squirrels juxtaposed with some quite sensible policies. It was a heady chaotic brew, and election campaigns were all the better for it.

“Would you sign my nomination papers please?” he asked, so meeting him in The Last Post I did just that, getting him on the ballot. Moments later, I found myself being volunteered to be his unofficial election agent/comms manager / general advisor. This was a huge responsibility, Dave warned me. If I got him elected I’d be in real trouble, as he was a busy man and didn’t fancy travelling to London too much. The pressure was on.

The most remarkable reaction to his death, at least on social media, has been the number of politicians he stood against coming forward to send condolences. Sitting and former MP’s. local councillors, all sending wishes and expressing how Dave bought some much-needed humour to the often grim and gritty campaigns.  That year, at the height of the Brexit anger, Broxtowe, and therefore Beeston came under particular scrutiny due to our erstwhile MP moving to another party, and some seedy right-wing types trying to cash in on the public polarisation.  Dave took it in his stride, handing out hand-drawn leaflets that set out his manifesto. He was unfailingly polite, loved to laugh with the electorate and seemed curiously driven. It came across as performance art: a deep satire of the ridiculousness of politics.

Following the election, we had a few chats on the phone and made plans to meet, but Covid scuppered that. I didn’t see him afterwards but would get the occasional email with a poem attached, or some bespoke observation on the universe/ Elvis / Matt Hancock’s voice. His death came as a great shock.

His election result? He came last, with 172 votes. I feel I did my job very well, sparing him the journey down South….and ensuring we kept a treasured son of Nottingham all to ourselves. RIP Dave, you’re shaking hips with The King now.