We love links to the past Beeston, and in recent times a bit of refurbishing work has seen a couple of old shopfronts revealed from the days of typewriters, black and white TVs and rickets. Bizzy Kids on Queens Road was once home to an early DIY store, whilst on the High Road what is due to become Yellow Wood café was evidently a shop that sold Golden Meadow Butter. 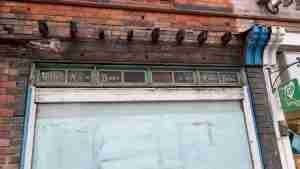 There are probably loads more of these in Beeston currently buried behind modern frontages, but if any are spotted then we’ll do our best to include them in here.

Written by Isaac on January 24, 2021. Posted in Beestonians through lockdown, Community, John Cooper. Leave a Comment

Ever wondered what has happened to the old Carphone Warehouse shop on Queens Road? It is now occupied by Broxtowe Community Projects, who have been in there since the start of November last year.

The project is a self-referral foodbank covering all of the Broxtowe Borough Council area, which was originally set up in the Labour office on the High Road. ‘Self-referral’ means that anyone in need can go and request help, rather than having to be referred by social services or other agencies.

As well as collections, volunteers deliver food parcels throughout the borough. The service is open on Mondays from 10am to 1pm and delivers on Mondays, Wednesdays and Fridays. This covers all of the borough, across to Stapleford all the way up to Kimberley and Eastwood.

The project runs on donations from the public, as well as supermarkets. As well as food parcels, those in need can also be provided with toiletries, nappies, formula milk etc.

Donations that are most useful are pretty much anything that has a shelf life – tins, packets and jars. Especially breakfast cereals and porridge oats, tins of soup, tinned meals such as chilli con carne or Bolognese sauce, rice, pasta, spaghetti. Also toiletries, nappies etc.

As well as serving those in need, each Saturday from 10.30am to 12.30pm the project is open to anyone who wants to come and take surplus food in exchange for a donation. As well as raising much-needed funds, this also eliminates a lot of food waste.

The project is always on the lookout for volunteers, so if you have time to spare then get in touch and see how you can help – 07434 664 174 or email broxtowe.cp@gmail.com

To keep up to date with what is happening at the project, follow them on Facebook here.