Written by jadekmoore on April 15, 2019. Posted in Jade Moore, Poetry. Leave a Comment

We caught up with Jen Pottle, to see how the micropub’s monthly poetry event is going…

Waaaaay back in July 2018, in micropub The Pottle, ‘Pottle Poetry Open Mic’ was born. This gave Beeston its very own regular poetry event, taking place on the first Sunday of every month. Those of you who organise your social lives using our Poetry Round-Up will already be familiar with the event, but for those of you who may not have come across this brilliant little gathering of poets, fear not.

The event was originally set up as a response to the fact that Beeston used to be a prime location for poetry events, often welcoming poets from outside the town to come here and perform. The Pottle Poetry may be ‘micro’ in location, but has been a big hit since it started.

I popped into the micropub to catch up with Jen, and find out how it’s been growing over the eight months that it’s been running.

“There’s a solid regular group of poets that come, some of them every month, which is nice,” says Jen. “But there’s also been some of the pub regulars who have come to listen to bits of poetry. One of our regulars, who isn’t really the poetry type, was even inspired to write their own poem!”

When I originally spoke to Jen before the very first event, she anticipated that by having it take place on a Sunday afternoon would make the perfect slot to read and hear poetry. So, was she right?

She says: “They’ve been relaxed, comfy afternoons, with a friendly crowd of people who are very accepting. I’ve been quite surprised by how many people are interested in poetry, and it’s nice to see people just wandering into the pub.”

Jen starts to tell me about one of the regular performers who does autobiographical poetry. “He asked if he could have musical accompaniment, so then for the next event he came with his dad and brother, and they did a musical poem. There was Spanish guitar and interesting percussion instruments involved.” 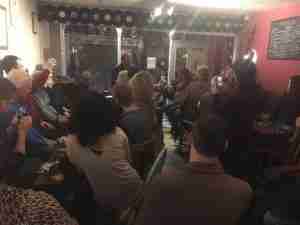 After this, they asked if they could do a longer performance at the next event. As a group, they’re known as The Fighting Nightingales, and describe themselves as delivering ‘progressive jazz/funk chit chat and tall tales set to strange music’. Jen says: “They came back and did a fantastic afternoon of music and poetry, and a huge crowd came to see them.” She also tells me that the group teamed up with regular poet Will Kummer, who comes to every Pottle Poetry event.

I got in contact with him to ask him what it is about the Open Mic that he loves. He said: “I would recommend Pottle Poetry because it’s a small and welcoming event. It’s actually where I did my first open mic performance and I think it’s great for those who are new to the poetry scene. A wide range of people attend and Jen usually opens with a piece of her own. It’s a fun way to spend a Sunday afternoon and an event that I’d be sad to miss.”

The next event will take place on Sunday May 5 as part of Nottingham Poetry Festival and has the theme ‘My Younger Years’ attached to it. “Someone challenged me to do this,” says Jen. “I was looking at my childhood poetry from when I was a teenager and thought it was awful. We are asking people to bring in childhood poetry to read it, or to write poetry about their younger years, if they want to!”

Even without the theme, Jen tells me there’s all sorts of types of poetry being performed, including: funny poems, light-hearted poems, limericks, serious and silly poems.

So, whether you consider yourself a poet or not, it’s worth wandering in.

Written by beestonia on December 1, 2017. Posted in Jade Moore, Literature, Poetry, The Beestonian. Leave a Comment

Jai Verma is a Hindi writer who has been living in Beeston for 35 years with her husband. They both retired a couple of years ago after working in the NHS. Now, Jai likes to spend time with her family, but continues to be a key part of her community through her role as a writer and promoter of the Hindi language and culture. I met with her at her home to talk about her life and writing.

Her origins are in India, where she was born in Meerut. In 1971 she moved to the UK with her family where she taught Hindi for 15 years, and was involved in translating books from English to Hindi. Her other hobbies included badminton (which the also taught), tennis, and later on, golf. For a short time, she served on the committee at Beeston Fields Golf Club.

About her teaching, she tells me, “We didn’t have any material for children in the 80s. About 31 books were done. Then I was employed by the language centre in Nottingham for 6 months. I made a thousand copies each of all these books, then they were in circulation and children were reading those books.”

Once her children were leaving home, they encouraged her to pursue her own education. She joined Broxtowe College to study Business and Finance, then went to Nottingham Trent University and did an advanced diploma in Practice Management.

“After that there was a taste for knowledge,” she says.  “A hunger for knowledge, I wanted to learn more.” And she did, going on to do gain a post-graduate certificate in Service Management. This lead to her 25 years working as a practice manager with the NHS.

“I didn’t think of myself as a writer, never thought I was a writer,” she reveals. “I used to do paintings, and one day suddenly I wrote two poems. I remember it was very cold weather and we couldn’t go out of the house so I sat upstairs near the fire and then I wrote two poems.” She shared her poems with a friend, who she was a part of the Indian Women Associates with, and at one of their meetings Jai’s friend announced that Jai had some poems with her which she would then read aloud.

“I didn’t know what sort of quality my writing was. And I read them! Everyone clapped and were very happy. And someone said ‘why don’t you read it on the radio?’” That someone happened to know the radio presenter, and Jai ended up reading her poem ‘A Moment’ on air.

“Someone in Birmingham was listening and he knew us, and he rang.” He then asked if Jai attended any writing groups in Nottingham. But at the time there wasn’t any such group, so he invited Jai to Birmingham where there was a monthly poetry group she could join.

“Once I went there,” she says. “I had the opportunity to listen to other poets and writers, and talk to them. And they used to clap on my poems as well when I used to read. I didn’t know if it was good or bad, I had no idea, but that’s how I started writing and developing.”

The group encouraged her to keep writing, and to keep collecting her poems. Jai noticed that the people in the group were published and had their own books, and this inspired her to eventually put some of her poems into a collection. Her book was published in India in 2008, and called Sahyatri Hain Hum.

“Nottingham is at the heart of England, it’s the Queen of midlands.”

In 2003 Jai decided to set up her own group in Nottingham called Kavya Rang. The group was made up of Jai and two of her friends. “Today we have 27 writers. They’re writing in different languages of Asia. Four main languages: Hindi, Urdu, Punjabi, and English.”

Whilst continuing to write poetry, Jai began writing stories and eventually had enough for another collection which became Saat Kadam (Seven Stories) which was published in April of this year. It was first launched at The High Commission in London, and then at The White Lion in Beeston by the Mayor of Broxtowe.

“And the mayor, very jokingly said: ‘But I will not be able to read it, because it’s in Hindi.’ And then of course I thought it’s about time these stories should be translated into English.” These stories are currently in the process of being translated and Jai hopes eventually they will be published and reach a wider audience.

Speaking about writing inevitably leads to her mentioning how inspiring she finds Nottingham, especially with its title as a City of Literature, and all the opportunities this provides for writers.

“Nottingham is a wonderful place to live. I wouldn’t like to change it. I can’t think of any better place. When I came to Nottingham and used to go and see the houses I thought Beeston was very ideal Nottingham is at the heart of England, it’s the Queen of midlands,” she says.

She adds: “Beeston has got everything; it’s a very cosy type of shopping centre. Whenever I’m driving towards the A52 I feel good going home.” At this point she hints that she’d like to join Beeston’s Civic Society, believing that it’s good to be a part of the community.

You can find out more about Jai and her work via her website: jaiverma.co.uk