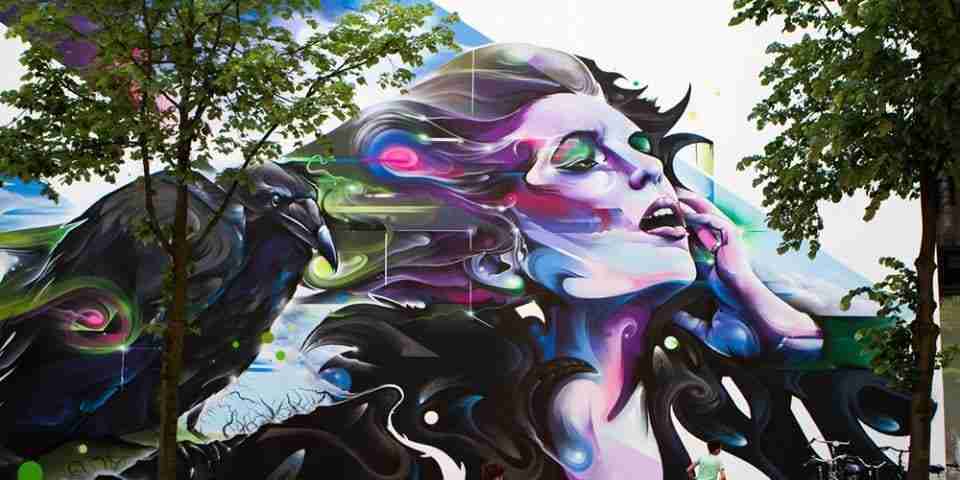 You can’t help noticing the wealth of gigantic artwork that sprung up around Beeston last summer. Most striking of all perhaps are the trio of famous Beestonians, Edwin Starr, Richard Beckinsale and Sir Paul Smith gazing down on you from the twenty-three feet high precinct walls on Station Rd.

If like us you love what the street art has added to Beeston then you will be pleased to be informed that more is on its way!  Attracting established local and international artists, our town is being rejuvenated by an overcoat of colour on the ugly areas past developments have left behind. 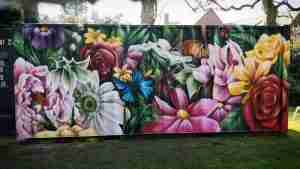 Beeston has been undergoing a huge transformation (particularly over the past seven years, since the tram extension began) and the street art has been the latest creation to redefine our town. It could be said that some of Beeston’s rich history has been highlighted by these artistic additions to its landscape; I am thinking in particular of Rob Jackson aka RJ77 Stencils’ Canary Girls on the side of The Victory Club when I type this, and the word on the street is that there is more of this to follow. I caught up with project manager Jeanie Barton at Greenhood Coffee House for a progress report. 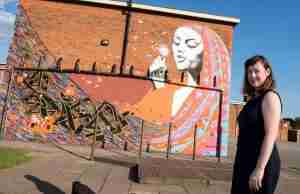 The original plan was conceptualised by Jeanie in 2017 and a call for design submissions went out. The response, and what has been achieved since, has exceeded all her expectations and she has been overwhelmed by the support the project has received from the community. You might remember that Beeston Street Art was launched by a lively festival on 16th and 17th June 2018 where a collective of skilled artists sprayed up their artwork at eleven different locations all over Beeston. The festival art was funded by a crowdfund and corporate sponsors and its success prompted Broxtowe Council to release an art fund they inherited from Henry Boot Plc.

They then commissioned their striking mural by internationally acclaimed artist Zabou on the side of the Birds building at the top of Station Road.  She painted her portrait of Robin Hood on the disused toilet block on the old bus station site during the festival to test the brick and clinch the job.  Whilst the festival added vibrancy to the town, the subsequent art work has served to bolster the idea that it can enhance its overall image. 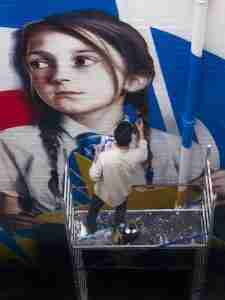 Jeanie has worked tirelessly to organise the works so far plus forthcoming commissions; she feels the new murals on the way will bring more cohesion to the pieces we already have and build on the intrinsic history that Beeston possesses, bringing it to the fore.  The project seems to be growing more organically and this will be reflected in some of the new art.  With the remaining council fund plus another crowdfund and new sponsors who include Saint Property Services, we will soon welcome Mr Cenz, Peter Barber, N4T4, Jim Vision and Alex Rubes to paint; Jeanie also hopes to bring NeSpoon here this year as well – she has designed a piece based on Parkes’ machine lace which was manufactured at the Anglo Scotian Mill on Wollaton Road in the early 1900s.

These works in the pipeline are due to begin in late July. Owen Jenkins’ family have fundraised for a memorial to their son, which will raise awareness of the Open Water Education Network, the charity they founded following his tragic death at Beeston Weir after rescuing two of his friends.  His portrait will appear atop the Station Rd side of Hairven overlooking the square; Collette Osborne who owns the building was keen to host the commemorative piece. At the mention of this scarily tall building, Jeanie remembers the daunting task of learning to use the scissor lift to prep the opposite wall for Zabou’s artwork. 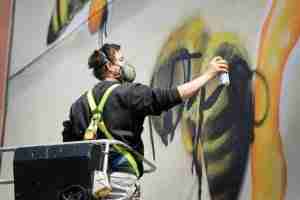 She will be doing the same again in preparation for Qubek’s nature inspired mural to be constructed on the remaining precinct walls to the left of Zabou’s work and the delivery entrance opposite Tesco also in July. His design will inject some natural beauty into this urban spot; he is particularly fond of painting flora and bees.  The bee has undeniably become our town’s symbol although the name ‘Beeston’ is derived from the old English word Beos (meaning long grass) and Tun (meaning town or settlement). If you look around, you will see that bees have already featured in the art around our town.

Jeanie tells me that there are a few other pieces due to pop up over the summer, one of which is top secret so I cannot reveal any details, however I think there are many locals for whom it will raise a smile. When she is not co-ordinating Beeston Street Art, Jeanie is making music and being a mummy to her 6 year old son. She also writes a weekly column, The Jazz Diary for the Nottingham Post in print on Fridays and is an award winning jazz singer/songwriter. 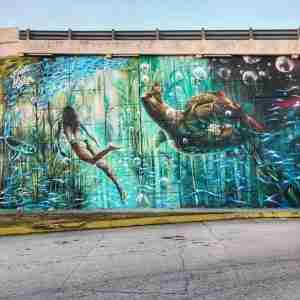 Her third album Moments of Clarity is due be released on 28th June.