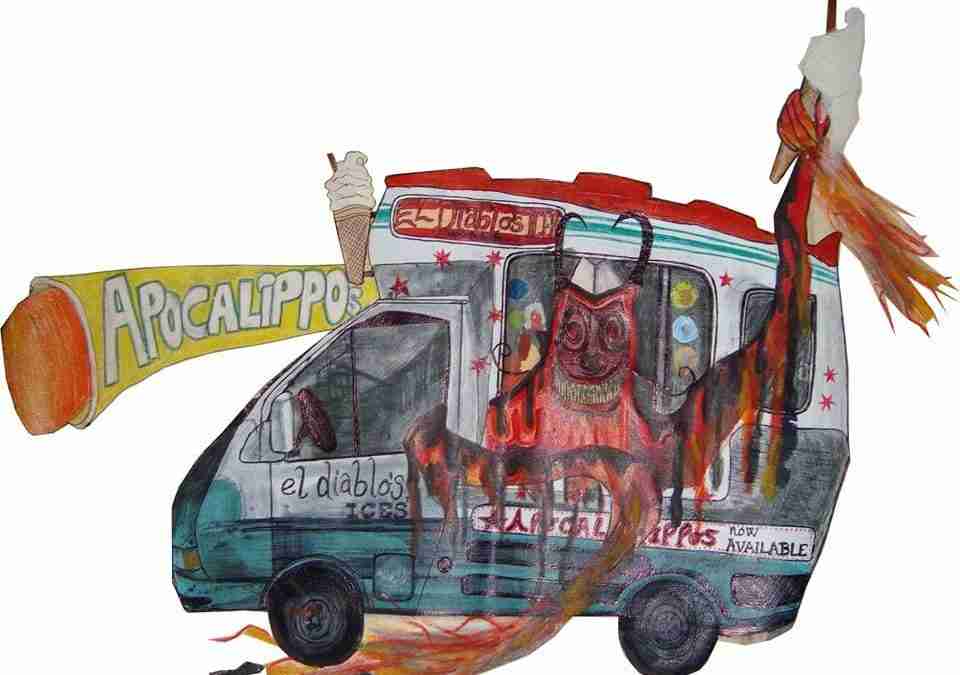 You might not be feeling much like an ice cream at this time of year, but then I did see a young man walking back home from the shop on Priory Island the other night, unwrapping a Magnum with the gleeful enthusiasm of an eight-year old that’s just paid a visit to the ice cream van.

Seeing as it is the time of year where cavorting with the devil might be actively encouraged if you do fancy a 99 or a something frozen on a stick, you might want to consider picking one up from El Diablo’s Ice Creams. Spawned from the imagination of a Beeston artists mind, driving towards you surrounded by the flames of Hell’s own fire, who would not succumb to the temptation of an Apocalippo, its headlined iced treat?

We love Matt Plowright’s often surreal and sometimes haunting artwork. When I questioned him about the inspiration for this particular creative masterpiece, he told me, “I envisaged Satan as an ice cream seller, with his own van. This juxtaposition of the heat of hell and a cool ice cream on a hot summer’s day, seemed ridiculous and laughably unlikely. I was inspired by the continental sounding names I had seen on ice cream vans, perhaps ‘Signor Whippy’ a Peter Kay creation. Also, I fondly recall Mr Benn for the aesthetic and the Mighty Boosh for the humour.”

I can’t help but be curious as to the music that would chime from deep inside its bloody guts, would it be the theme tune from the film Halloween or something even more sinister? Would some other evil being need to stand in for Satan when he had other important satanic business to attend to, and who might that be? One thing is for sure, I don’t think I would be asking for the red and green syrup…

You will find more of Matt’s artwork on Facebook at www.facebook.com/ PLOWZart/ and www.facebook.com/rodgertheprawn/ on Instagram at Matt Plowright and at his Beeston home studio. Please contact Matt via email at mattplowz@yahoo.co.uk to commission a piece of work or if you can provide a space to exhibit his vast collection of work. Matt will also be taking part in this year’s Art Trail.