It was truly a treat for our community to have the ABC Art Trail back on the calendar this year, a timely reminder of the value that creativity has on our well being.  A little later on in the year than usual, nevertheless with its usual buzz, artists and patrons opened up their homes to bring us a physical gallery that spanned approximately four square miles of Broxtowe borough.

As in previous years, I cycled round the trail. This year though I was accompanied by a good friend and her eight year old daughter, Erin. Having never visited the trail with a child in tow before it became apparent that our progress might be a little slower. However, what she lacked in cycling speed she more than made up for with her wide-eyed perspective. Genuinely interested in getting her view of works to photograph and write about, I asked her to lead me to her favourites and tell me why she liked them more than any of the other brilliant works we saw.

We started down by the canal at Canalside Art, after a leisurely lunch at the Heritage Centre. Erin chose almost every painting of the dozen or so placed on easels around Janet’s garden for me to photograph,  but was in the red brick studio where she found her favourite painting – Pedro the rescue dog. “The doggy is cute and I like the colours in the background, they are calm and peaceful. The dog looks happy.” She stood observing Pedro as he sat obediently on his floor cushion, his eyes two shining Minstrels staring back at us from the canvas. 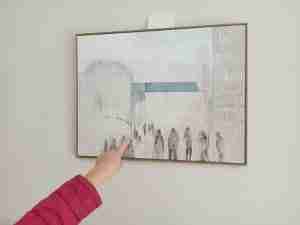 I wasn’t sure what an eight-year old would make of the haunting figures and sombre palette of Oliver Lovley, but as we ventured through the open front door on Burnham Avenue she was immediately drawn to the large square painting in the entrance hall. She noticed he had used “just three colours for the whole painting” and commented that “the tree looks really weird.” And she was right, there was something unsettling about that tree’s fractured form but at the same time it was elegantly beautiful.

We stood together and watched over it in silence for a short while before moving into the main room where Oliver was painting, surrounded by a large selection of his work.It took us a long time to get round them, captivated by the tiny painted figures captured in each frame.

It was clear that the bold colours of Oksana’s textile work would easily attract attention and Oksana herself was happy to share the process of rag rug making to a curious child. Naturally she loved the bright ‘fiery colours’ and found it difficult not to run her fingers over the pile, especially as she had seen the bag of fabric that was being used to make the rugs. However, it wasn’t until we pedalled our way to Red Lion Pottery that I felt my young companion was truly inspired.

Alan Birchall is always happy for visitors to pick up his pots and her little fingers were definitely enjoying exploring the different textures and patterns of his plates and bowls. She was particularly entranced by the collection of ceramics on the many shelves of his small studio. Pointing to a blue glazed bowl she declared, “ I like these pots because it’s like the ocean blue colours. It makes me … basically feel wooshing waves in my head. It reminds me of the sea.” I could picture the “ziggy-zaggy” pot she described and the “dabs of blue” on another as she flitted excitedly from shelf to shelf. 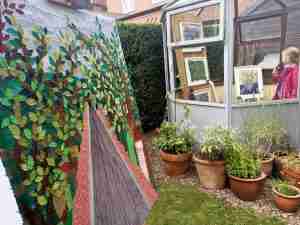 Zoe Zegzula’s textile toucans also caught the keen youngster’s eye but it was the panoramic landscape of lush olive grass velvet grass and spidery black trees that she requested I photograph. Again it seemed to be the variety of textures that interested her. On our last stop at Karen Attwood’s she elaborated on this further when stood looking up at one of Karen’s wet felted trees. “They have used lots of different fabrics and different colours of fabrics. It feels autumny because of the colours.”

It was rewardingly refreshing to view the artwork through a child’s eyes. We can learn a lot from their honest reactions and responses, maybe it IS simply beautiful because it is colourful.

Another lesson was also learned on that day, and that is how important it is to take your time to examine the details and look at the world again like everything is new and wonderful. Thank you Erin.