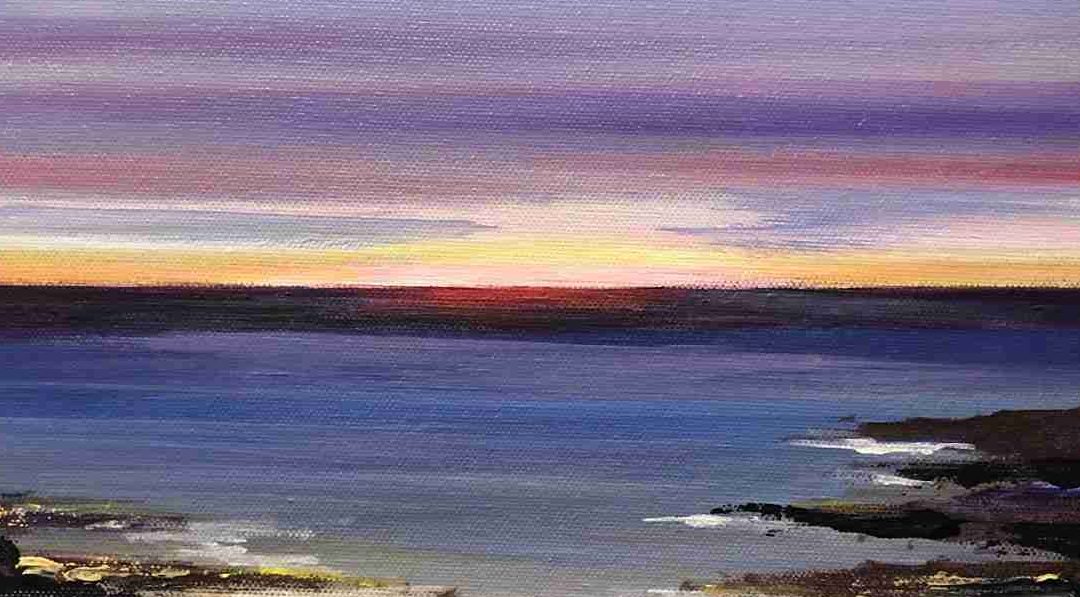 If you know Janet, you will no doubt be aware of her lust for living, enthusiasm to embrace new experiences and get stuck in with organising fundraisers and community projects alike.  I met up with her in May and learned that she had coordinated a Disco at Rylands Community Centre for that very evening.  Alongside the JustGiving page, the Disco’s purpose was raise money for the self-funded Parky Players tour to the prestigious Edinburgh Festival Fringe– they are still seeking support for this incidentally!

It’s a brilliant blue sky afternoon as I sit catching up with Janet in the tranquil garden of her Beeston canal side home, which houses her studio and a comfortable outdoor social space with a bar. I can see why Janet chose to settle here. She tells me that their play Shake It Up was a theatre adaptation of an audio production, originally entitled Seven go Fracking, created by members of the Nottingham Trent Bridge Parkinson’s Café.

The group of thespians, which ‘happen to be diagnosed with Parkinson’s Disease’, received Arts Council Funding which facilitated this. Following her own diagnosis in 2017, Janet began her journey through the stages of grief and by her own admission stayed stuck at denial for a long time. Passionately throwing herself into anything that could relieve both the physical and emotional symptoms, she is successfully maintaining a life of meaningful joy, and her artwork has become a true expression of this. I had noticed how the rich jewel tones of her earlier paintings has been brushed aside by much brighter tones.

A regular at the ABC Art Trail, Janet is taking a week in each month for a campervan tour with her canine companions Pedro and Rosie, which should come to its conclusion next March. She did a similar art exploration in March 2020, when she went into voluntary social isolation in a caravan in rural Wales for 20 days, to fully immerse herself in creativity, ‘connecting with the natural with more free expression.’ This was both a personally challenging and enlightening experience for Janet, and the resulting journal and paintings reveal the range of emotions that emerged during that time. 20 Days in 2020 is an honest and moving account of her days of solitude.

On her latest art trail, also Arts Council funded, she is allowing inspiration to find her as she meets people experiences different landscapes and shares stories and ideas. Janet is hoping to produce a body of new work that record what acceptance, adaptation and ambition mean to her – the three word mantra of her journey through life with Parkinson’s and perhaps wisdom for us all to live by. 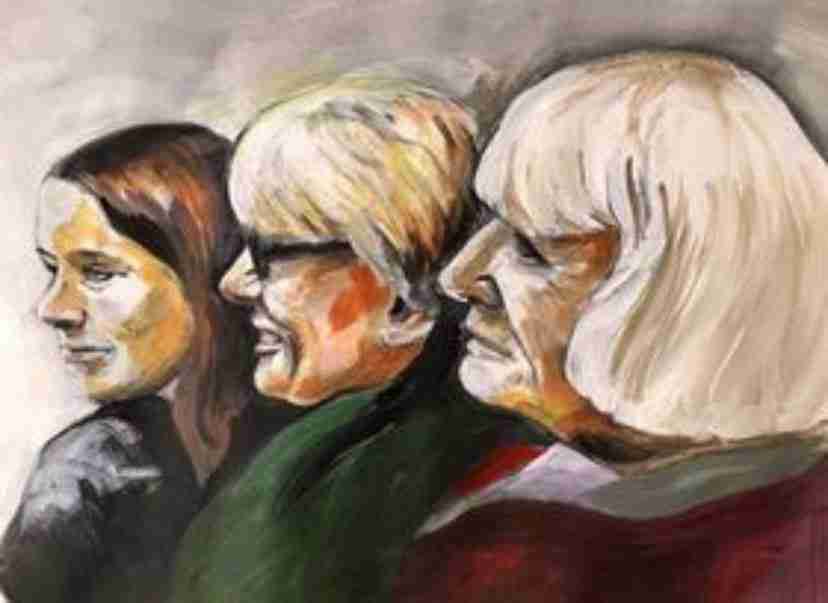 The month of April saw Janet heading west to a campsite in Staffordshire where she caught up with friends which prompted the painting of Jess, Claire and Pat – three generations of women from the same family. I understand her when she describes the act of painting as ‘mental medicine’, this particular painting a distraction from some of the grief and sadness she was carrying with her that day. She writes in her blog “I’m extremely pleased with the therapeutic effect of the process and the outcome has a real likeness and captures their spirit.”

In May Janet travelled further afield to the south coast, spending time in Somerset, Devon and Cornwall. The latter part of this trip proved especially emotional as she walked along the beach at Barracane, a place where she and her family had spent many of her childhood holidays, worried for her dad who had been taken back into hospital the previous day. The strong emotional attachment to the place led Janet to collect shells and then paint the brilliantly hued seascape that is featured in the summer issue of this magazine.

June was the month that our touring artist journeyed from Nottingham to Seahouses then from Seahouses to Glenmore, Aviemore, where she was greeted with a warm smile from her Beeston friends Julie and Michael who are working on a campsite up there over the summer. I got a strong emotional response to the painting she created of the trees on the edge of Glenmore Forest, an evocative pull towards the trees, to escape for a couple of hours in the their dappled shade and earthy scent. Janet tells me she really enjoyed the layering process in this one and used acrylic paint and pastels to build up the density and texture of the bark and foliage. I was a truly meditative experience.

Though the palette tones are more sombre on this trip, I think the collection of paintings it inspired have really harnessed the calm and perhaps demonstrate the return to serenity that was needed.  The seascape Janet completed after her Seahouses visit, with its solitary boat on a flat wistful sea, oozes tranquility in the same way that the featured image of Barracane Bay slowly releases vibrant energy. And don’t be fooled by the sunshine bright treetops in the mixed media piece Janet completed in Robin Hoods Bay, she was working through some turbulent ‘stuff,’ and for quite some time too. The resulting image could be said to represent the two shades of life: the darkness and the light, the colour and the monochrome, the melancholy and the joy. I appreciate its depth. 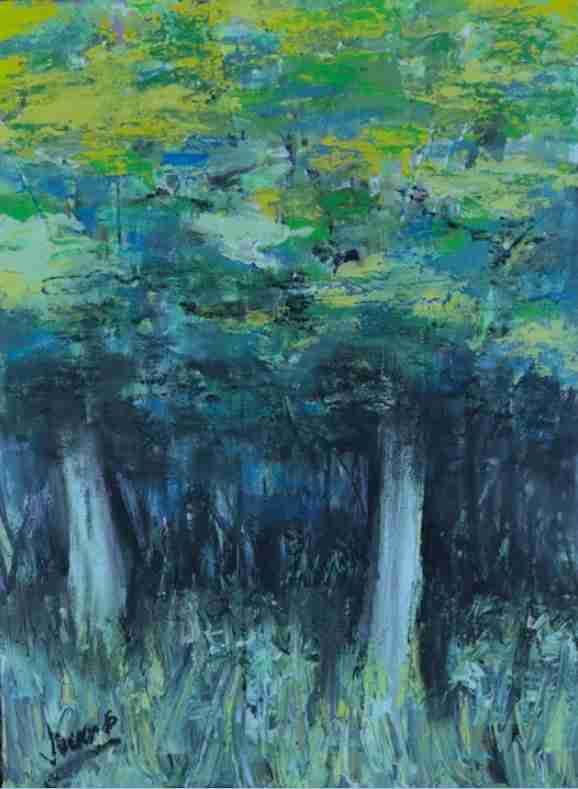 Art as therapy is something that Janet genuinely subscribes to. In her most recent trip she had a lot of ‘stuff’ to work through and returned feeling as though she had had a real ‘break from everything.’ She also felt that she really got ‘into the groove’ with her painting, something was perhaps less apparent on her first trip.

Despite her diagnosis, Janet remains a vital, curious and adventurous soul intent on making her mark in the world. When she isn’t painting she is performing with the Parky Players or fundraising for Parkinson’s. She truly is making the most of every day. Changing the name of her art business from Canalside Art to Painting with Mr P was of huge significance. It reflects her determination to accept her health condition, continue doing what is important to her by adapting to her new circumstance and retain her ambitious nature.

Janet has been making art since she was a child and thrived on the encouragement she received in her formative years, going on to study design and gain a PhD in sustainable design at Sheffield Hallam University and working in this industry until 2017. Having always enjoyed sharing her art knowledge and skills, Janet set up the life drawing classes at Canalside Heritage Centre and more recently painting workshops at the Sandiacre Lock Cottages for all ages and abilities. A beginner to one of Janet’s classes spoke about her ability to put participants at ease when they are lacking in self confidence,

“I found it quite stressful to begin with, not having done anything before in acrylic, but she did spend quite a lot of time with me when she saw how stressed I was getting which I did really appreciate.”

Janet also talk about how rewarding she found a collaborative art event Me, My Health and I in Mosley, Birmingham to mark the start of Mental Health Awareness Week. She led with her workshop, Paint Your Feelings, which encouraged others to explore the benefits of their own creativity. The resulting piece of collective artwork is a powerful statement on the overwhelm, and resilience needed to manage our mental health.

20 Days in 2020 is available to buy at £5 a copy, with the £2 profit going to Parkinson’s UK and links to Janet’s workshops, art and performance work can be found here