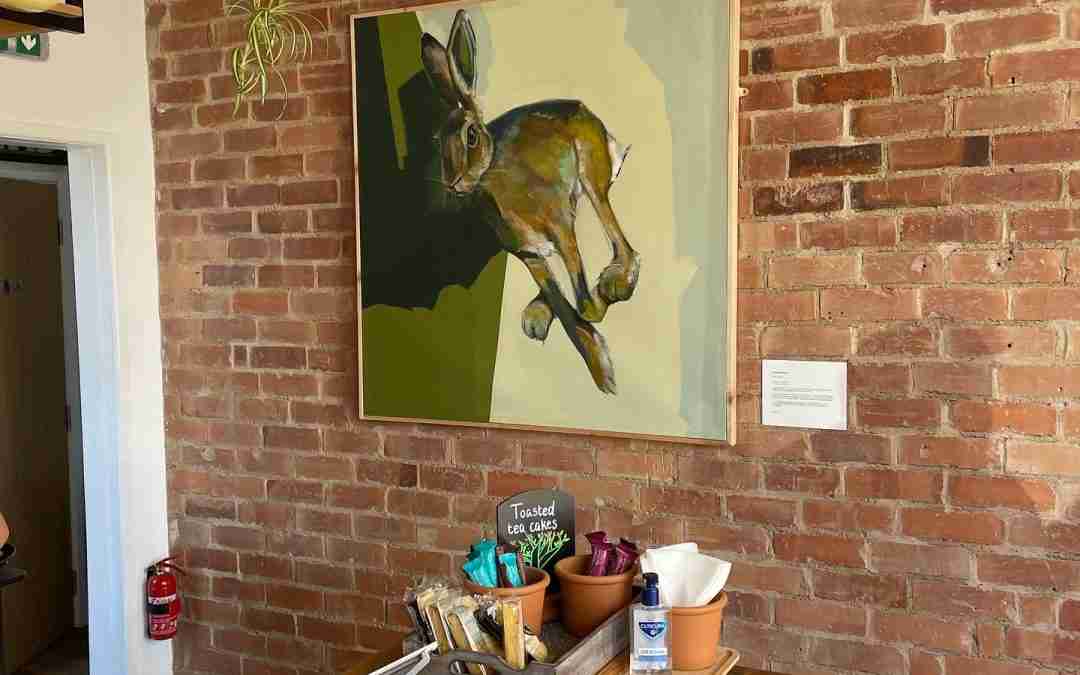 Regular readers might remember the article we featured last spring which followed the old convenience store renovation on Chilwell Road which has since become the wonderful community space that is Yellow Wood Café. So much more than just a coffee shop, Iain is fulfilling his original plans to open the three floored restoration project up to the community by providing a light and airy space for meetings, events and social gatherings including being a host for this year’s ABC Art Trail.

If you have visited this summer, you may have taken advantage of the garden oasis that Iain has nurtured in the back yard area. Following the path out through the back of the café you will discover a delightful canopied outdoor ‘room’ behind a black iron spiral staircase.  I have continued to follow the growth of Yellow Wood Café and decided it was time to catch up with the Nottingham artist, Richard Mynett, who painted the beautiful mural occupying the main wall in the café area. I was keen to ask him how he became involved in this exciting project, and about his recent contributions which contribute to the relaxed atmosphere. 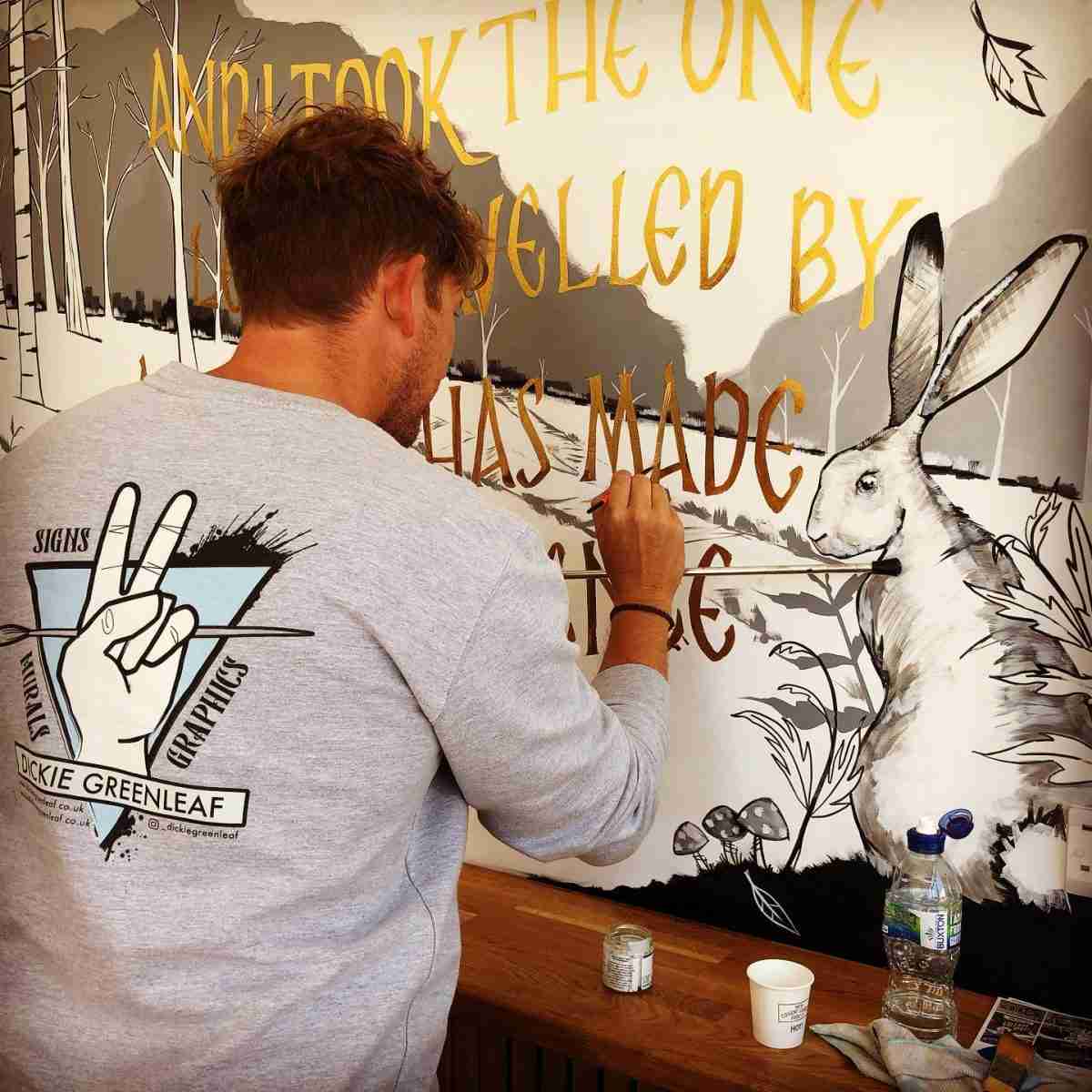 It’s a warm start to the late July day, so Richard and I settle ourselves in the cool garden after ordering our coffees. I first met Rich at the end of the summer last year, just as he was completing the hand-painted signage on the glass door. I have a keen interest in traditional crafts and enjoyed watching as he patiently created each letter. Rich tells me the first contact he had with Iain was a response to some photographs he had take of painted canal boats on the River Trent at West Bridgford, that he had then shared on social media. Thinking about signage for the café, the images had caught Iain’s eye and prompted him to get in touch with Rich.

The original, and much talked about, copper lettering on the top windows ‘Golden Meadow Butter’ that Iain had exposed when removing all the tacky modern fascia boards, had given Iain ideas about how he could preserve as much of the building’s heritage as possible. He approached Rich about replicating the font in the signage and a proposed a mural featuring a poem with personal significance. This appealed to Rich who was also encouraged by Iain’s passion for his project and desire to build something of a creative hub. Rich tells me that the images came later on in the planning, Iain loves rabbits and so they were introduced into a woodland scene that complements the golden text well – the gilding was something that Rich wanted to try, and it fit well so with the ‘yellow wood’ in the poem. This is the kind of commercial work that Rich enjoys – when you are truly invested in the people that you are working with.

The desire to create originally came from his father, who was originally a well respected lace designer, head hunted by various Nottinghamshire lace factories. We talk about art as a ‘working class pursuit,’ toiling with your hands. Using practical skills used to create beautiful things and improve the look of ordinary stuff. Rich mentions the artistic value of the painted Romany Gypsy caravans and the canalboat art known as Roses and Castles as an example of this. Being creative is truly a gift, but fighting against this the expectation to earn a regular wage in a ‘proper job’ can put so many people off pursuing art as a career.

Recognising that he had this enjoyable gift from a young age, it’s no surprise that Rich chose to enrol on a Fine Art Degree course when choosing his path. He studied in Hull, which he feels was a ‘great place to be in the 90s.’ At that time Hull was a city that Philip Larkin celebrated, both in his poetry and with his words in the biography written by Andrew Morton and published in 1993, ‘I like it because it’s so far away from everyone else.’ It was also a place where he felt part of a community, where students rubbed along well with the locals.

The course suited him well. It was hands-on, interactive and gave him the opportunity to meet many artists who were influential in the Brit Art scene at that time.  Artists like the collective KLF, Gavin Turk, Sarah Lucas and Tracey Emin were invited in to give lectures which helped students connect with the art industry beyond the course. However, it took Rich a while to find the right creative path. After a brief spell living in Brighton, which didn’t prove to be the fertile ground for his creativity that he had imagined, Rich moved back to the Midlands, secured work as a graphic artist and qualified as a secondary art and design teacher. He is a committed environmentalist and nature lover currently residing in DH Lawrence country, which may be what prompted his return to more natural forms. 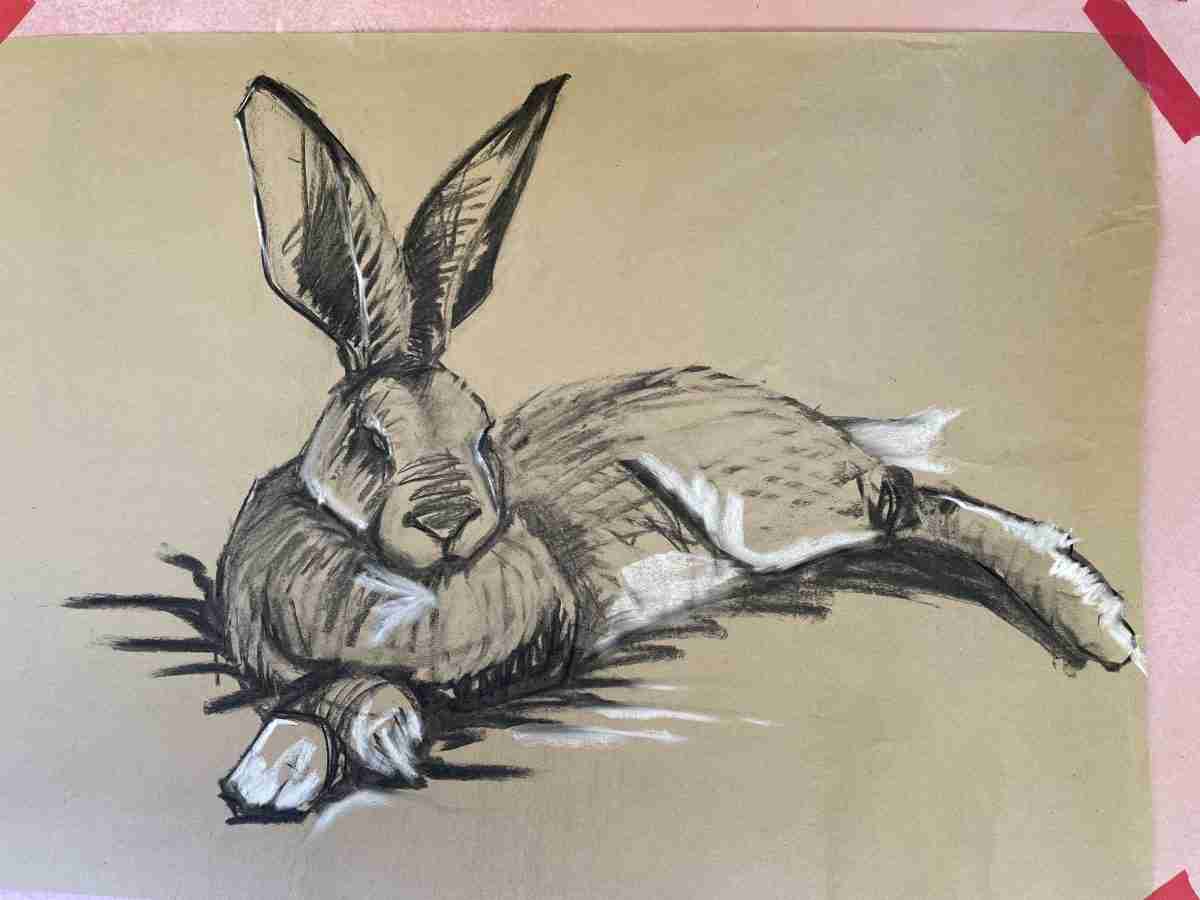 Hung just to the right of the counter at Yellow Wood Café the agile figure of a hare running wild will be sure catch your eye. The rich retro green first caught my attention, but it is the golden russet tones of the fur, the poise of its neat head and alert gaze that really bring it to life. Rich is attracted to the magic and mythology that surrounds the hare. A sacred animal to the celts they are said to be a symbol of abundance prosperity and good fortune and have connections to the Otherworld and are widely represented in world mythology. I can see the attraction, trying to capture the quick athletic movements as they dart across the forest floor is certainly a challenge, but the lively sketches in his Instagram feed show he is rising to it.

Despite most of his commercial work being graphics based, Rich is relishing the possibilities that this return to figurative painting will bring. He is practising with light honest sketches that pull him gently away from the precision of the graphic style he has become proficient in.  As well as being a commercial artist, Rich has a teaching qualification and has taught art and illustration, which he enjoys. He is currently appreciating the balance that sessional teaching of digital art at NTU and graphic design to adults with barriers to learning brings. It gives him time to work on his new portfolio of work as he moves into a new phase of his creative life. As a vegan, he ensures that all of his materials are cruelty free, a focus on sustainability never far from his mind. 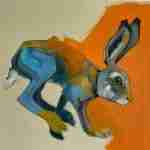 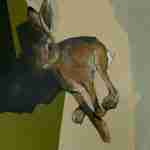 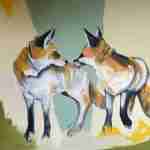 And if you are wondering what became of the period lettering on the original windows, that couldn’t easily be restored and disappeared when the windows had to be replaced, you will be delighted to know they are going to be back in reincarnated form as a light installation within the café – keeping it well connected to its long forgotten roots.

You will find some fine examples of Rich’s painting, drawing, murals and signage work on his website.