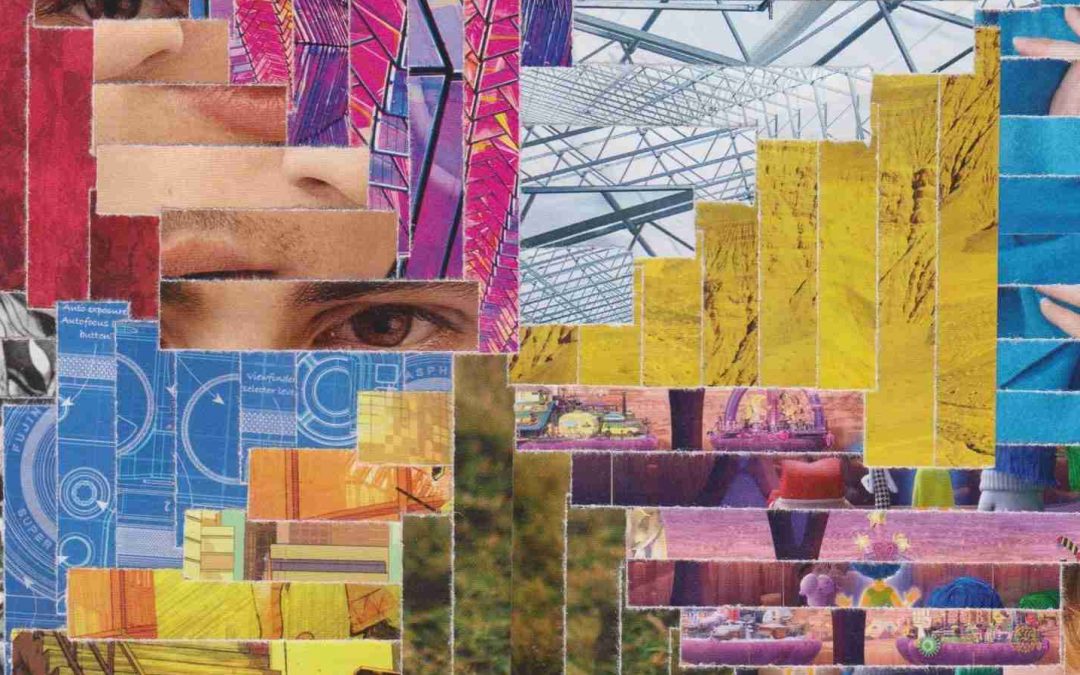 You might have seen a large piece of Andy’s collage work as part of The Beeston Showcase last winter. A kaleidoscope of rectangles cut from old magazines. I spent a long time studying the slivers of glossy paper searching for something familiar to give it meaning, to make a connection. Meticulously pieced together, the structural qualities of these images add cohesion where there could be chaos.

If you are looking for a piece of art that halts you on your heels then you have definitely come to the right place. Conceptual artist Andy Winter’s collage pieces, with titles such as Brain Damage and Poverty Safari will be sure to challenge your preconceptions and get your cognitive gears grinding as you process some of the issues his work confronts.

In his exploration of human matters surrounding identity, social class, femininity, masculinity, cultural expectations, exploitation, mental health, and the distorting effect of the media on all of these he uses magazine covers and pages to great effect -successfully making the analogue appear digital. Planning with purpose, each torn piece intentional, this medium allows access to the images that both support and are a catalyst for societal issues.

When I meet up with Andy, on a bitter and windy winter evening I notice how much his tie replicates the fragmented pixelated nature of his collage work. I appreciate that he has agreed to meet me after a long day at the day job, which includes a commute to Sheffield. I note from his Northern accent that Andy must hail from the North East – he tells me that he is originally from Durham and originally moved to Nottingham for work and has resided in Beeston for ten years.

He grew up in a small mining town in the North East during the 80s. Particularly as a man, the conflict of identity ‘what is expected of me?’ would have been embedded in the culture of the grafter, earning his status and his pay with good honest toil. A starting point for Andy’s art was an expression of that inner conflict, and how people create their identities. Andy’s father was an ex-steelworker turned engineer and his mother a teacher. This gave Andy a broader palette to explore with and he decided to undertake a degree in English Language and Linguistics at York St John University which satisfied his interest in humanities.

Andy tells me that he has no formal art training and that his meticulous collage work was borne out of necessity – he simply needed a creative outlet. He describes the feeling of being ‘creatively stifled’ whilst working at Loughborough Students’ Union as life consisting of work and escaping through social drinking, which he recognised wasn’t healthy and eventually led to him having a breakdown. He chose collage as he felt it didn’t require any drawing or painting skill but quickly discovered that there was great ‘therapeutic value in creating art this way.’ The mindfulness of the repetitive cutting, tearing and sticking he recognised as soothing.

He feels that part of his passion for challenging societal expectations came from conversation in his early 20s with his mum – a memory of her telling him that she had had a career that was expected of her rather than the one she actually wanted. He recalls feeling the pressure from school to ‘know’ what career path he intended to take as well as being told by his mum that “you don’t enjoy work – you work to get money and then use the money to enjoy your life.’

Andy also talks about the importance of art being accessible to all and thinks a lot about the UK’s obsession with class, which he explores within the Poverty Safari theme. Although his ultimate aim is to provide considered works loaded with social and psychological commentary, he maintains they must always appeal to viewers on a visual basis.

We talk about the ‘shapes’ within his work, the abstract and fragmented images and how they might look like they are ‘thrown together’ in the same way that some people might view a Pollock, but they most certainly are not. Referring to a conversation with the partner of an old friend who taught at Leeds College of Art regarding the ‘intentional act of mark making’, Andy states he is driven by intentionality. There is nothing in any of the images he builds that isn’t supposed to be there, sometimes the direction might alter slightly and no doubt accidental meanings may emerge, but the shapes formed are entirely planned so the ‘reaction occurs’ – a brilliant balance of colour, image and words.

As I delve into the image Andy submitted to accompany this article, I am caught off balance by the dizzying directions it takes. It’s like looking through a kaleidoscope with human body parts stacked amid the mesmerising colours. The facial features appear to be male, the slices of hand look feminine and in the bottom right hand corner I notice a woman’s eye and lips. There’s a potential play on gender identity on the far left where the body of young men and women are interweaved and one couple appear to have been deliberately spliced together – perhaps a comment on the fluidity of gender. I remind myself of the title before I study it further.  Jealous Monster Chopped off my Fingers for Texting conjures up a jealous lover, reacting to the knowledge that their significant other’s affections may be being directed elsewhere.

The suggestion that the ‘crime’ might deserve the extreme punishment of severed fingers is perhaps a nod to the reactionary way society appears now to be, but also how desensitised we have become to violence. I don’t know, it’s just my interpretation. I look again, I see the stem of a wine glass, a blush of deep pink, the flesh-tone of the background suggests a sensual encounter? There are images that suggest travel, perhaps to secret assignations, the traffic lights are green after all.

I have noticed the images from Monsters Inc and I am pretty sure that piece is saying much more that I have discerned so far, but I am intrigued and want to see more examples of Andy’s creativity. His website rewards me with numerous avenues to explore. Andy is candid about wrestling with his mental health and how he manages this.

‘This got me naturally thinking about the scaffolding we all create to manage ourselves and navigate the world around us. And thus the Coping Mechanisms series was born.’

Despite the intensity of his work, I found Andy a warm and humorous man and his work supports this– it has a playful edge. In his collaged pieces he explores all what troubles him about the world and perhaps this brings him a sense of peace. As the waves of each global crisis seems to rage and swell on a tide of media sound bites, I think we all need a little outpouring of some sort. As this century has unfolded, it’s clear we need more than the platitudes of *Manny’s Little Book of Calm, to soothe away the stresses of the day.

We talk at length about how the human race became so diametrically opposed, where all the conflict appears to be coming from and agreed that we are in the midst of deeply troubling times. Andy feels that when we feel under threat it is human nature for people to ‘harden their resolve’ when they feel their belief systems are being challenged, and when those flames of fear are continually fanned by the media we have a situation where hostilities rise up and conflict occurs. Nevertheless it is important for us to confront these challenges, ‘better out than in’ as they say.

*Black Books The Little Book of Calm is a book written by Paul Wilson, used to advise people on how to deal with stressful situations. In 2000, Manny Bianco purchased the book from Black Books in order to deal with the high amount of stress put on him by his job as an accountant.