H3: The first headteacher of colour in the UK

We’ve long been pioneers here in Beeston, so let’s toast the memory of an inspirational, trail blazing head teacher:

I was eleven, in Autumn 1982, when I first heard about Miss Herring. The six o’clock news was on, and buried towards the end amongst the usual human interest stories was an announcement about “the first black headteacher at a school in England”.

“That’s wrong for a start,” said my mother. “Because my headmistress was the first ever Indian headteacher in the country. Her name was Helen Henrietta Herring, and she signed her name H3.”

Mum started rummaging around in the sideboard- anyone brought up before the days of digital technology will know the one- that cupboard full of envelopes stuffed with photos along with their negatives, always meant to be put into albums just as soon as someone found the time to do it.

It was a school report from Beeston Secondary Modern, and sure enough, in green ink, with the 3 circled above the name, there it was: 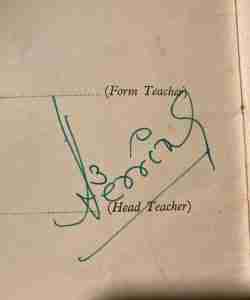 “Miss Herring was lovely. She was my headmistress and she came from India. She had a beautiful blue and silver sari, and if you played Mary in the nativity she would let you wear it.”

Mum was born in Beeston in 1946. The year after my mother was born was the same year that 31-year old Helen Herring saw an advertisment in the Indian press for teachers and boarded a ship bound for England. Her father was Anglo-Indian and had served as senior commander in the Women’s Auxiliary Corps during the War.

Sadly I’ve not been able to find out anything about Helen’s early life in India, although I know that she had at least one sister who lived in Reading, and other family in Scotland.

I’m informed that if her father was Indian, this would have been highly unusual as officers in the WAC tended to be white British; nonetheless, Helen was rightly proud of her Indian heritage and regularly spoke of it to the pupils at Beeston Girls Secondary Modern (latterly Nether Street School, latterly John Clifford) where she became a geography teacher.

My mother had sat, and failed, the eleven plus in 1957. This meant that instead of going to the local grammar school she ended up going to Beeston Girls. By this point Helen Herring had been appointed acting Head of School, a position she held until her retirement in 1978. When I was looking into her story, I found a Beeston Facebook group where some of her ex-pupils were kind enough to share their memories of her with me:

“She told us about India. She said she worked very hard to get where she was”

“She wore red lipstick, had a red mini, wore red nail polish and wrote in red or a green pen. If you ripped your tights she would give you a note for the corner shop for a new pair”

“She always drove a mini, and she brought her cars into Willoughby garage to get them repaired. I worked in a nursing home in 1999 and she used to come and visit one of the residents. She was still driving her mini”

“She used to bash on the window with her keys to get us to line up and smashed a window once. Much to our amusement”

“Gran told me that she asked the council to stop the bin men coming to the school as the girls were behaving inappropriately towards them!”

“She used to say girls chewing gum look like a herd of cows!” 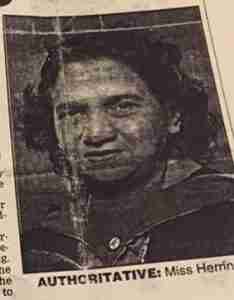 There are two photos that I’ve been able to find, neither of which are clear, and both date from the 1970s. The one that interests me the most is this one, which shows her graduating from the Open University some time in the 1970s. The OU enrolled its first students in 1971, which means that Miss Herring took her first degree  at the earliest when she was in her mid to late 50s.

It makes Miss Herring not just a pioneer in her career accomplishments, but also in her embracing this new institution that, in its early days, some parts of academia and the establishment were decidedly sniffy about.

The inaccurate news report that first brought Miss Herring to my attention seems to have galvanised some of her other ex-pupils into arranging a school reunion a year or so later. My mother’s school days were not the happiest, and it was therefore a mark of the depth of feeling that she had towards her headteacher that she went to the reunion and got the chance to see Miss Herring once more. She told me afterwards that Helen had been delighted to see her and was keenly interested in everything that her “girls” had done since leaving school. I know myself how hard she worked to improve the life chances of her pupils, as she had secured a place at art school for my mum and encouraged her to go there rather than into the job as an office girl that her father had arranged for her when she left school in 1962 aged 15. It didn’t happen- it should have happened- but life doesn’t always pan out the way you want it, although in later years my mum was able to put her considerable creative skills to good use in setting up her own dressmaking business. This, I think, Miss Herring would have been thrilled to hear.

I’m glad my mum got the chance to see Miss Herring again, although sadly it was only the once, as they both died in 2001. Aside from the personal though, it’s right that Helen Herring’s name should be more widely known- she really was the first woman of colour to become a headteacher in England, overcoming considerable odds in which to do so. This needs to be celebrated.