I am Beeston: Rebecca Jones – Postie 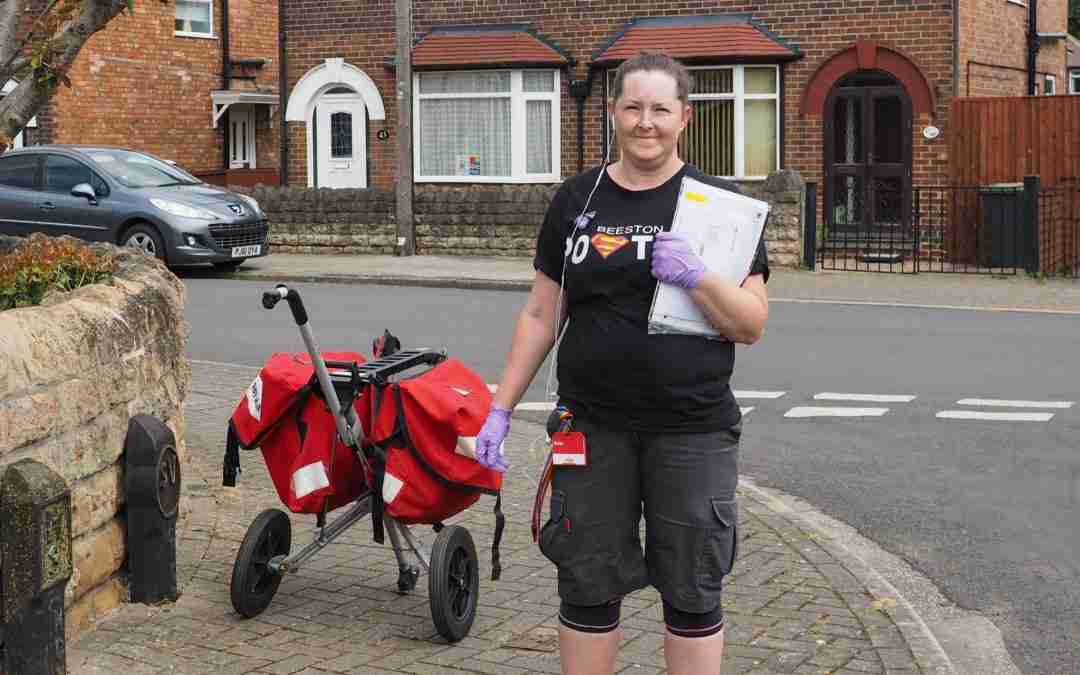 “I was born at the QMC in Nottingham, and I’m originally from Cotgrave. I have two sons, and when I had my oldest son, some 15 years ago, I moved to Mapperley, Gedling and then in the city area, where I have been for a few years now.

“I ﬁrst discovered Beeston when I was training to be a nursery nurse, and went to Orchard Day Nursery for my college placement. Orchard Day Nursery is a lovely family run nursery which my school friend and I enjoyed going to. We also enjoyed exploring Beeston itself.

“I’ve been working as a postie for nearly nine years now, and certain aspects of my job have helped me with gaining more conﬁdence. I have made lots of friends within Royal Mail, and this has helped me to get to know the people of Beeston, through the different parts of my job and being on Beeston Updated. When I started the job I knew hardly anyone from Beeston, now I feel part of the community. Now nine years later, I have friends all around Beeston and big thanks to my best friend Lisa Jones-Bragan, for her amazing support these past nine years.

“Being a postie can be an important part of the community, especially getting to know people and delivering to the elderly and those with disabilities. Checking on our regular residents can be a bit of reassurance for them. I have in the past done a welfare check on someone. As an ex carer, sometimes your gut instinct kicks in and some things can play on your mind until you get home, so I’d rather know and have peace of mind that people are ok.

“When Owen Jenkins tragically passed away in 2017, I got to see the beautiful, positive side of Beeston’s community. I delivered to the Jenkins family and got to know that they are the warmest loving family you will ever meet. I have got to know a lot of people from around Beeston now, as I have worked all around the area and further aﬁeld. Since the lockdown, I’ve felt a lovely sense of community care. One lady a few weeks ago on one of my regular walks gave me some hand sanitiser, which I really appreciated. I’ve also received a lovely Easter card and some mini eggs. I have seen several notes on doors and windows saying ‘thank you’ to the posties.

“Five years ago I fell over during a delivery, on the same week I fractured my hip, and so I was off work for three months. I had to have a titanium plate and some screws put in place. Since then I’ve done two 5k races, to raise money for Women’s Aid and Race for Life. I’ve also done a 10k run for Race for Life. Next year when the lockdown should be over, I’m hoping to do another run, this time for the OWEN (Open Water Education Network) charity, as it’s one that’s close to my heart. I try and visit every charity event that they attend, to help raise money for Owen, in his name.

“Although I don’t live in Beeston, I appreciate the opportunity of talking about myself, as I enjoy my job, working in Beeston and knowing so many lovely people”.