Is Night the Only Reality? 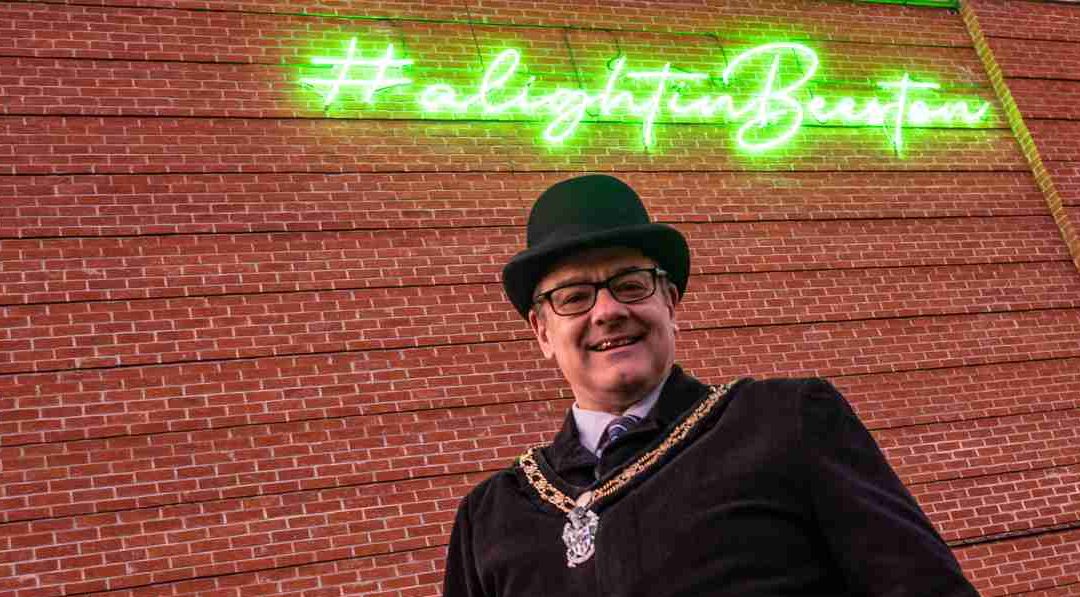 The title is a line by Austrian poet Rainer Maria Rilke, and is quite apt for Beeston’s first Light Night, that took place at the end of January. Created, organised and run by the Beeston Street Art Group under the creativity of Jeanie O’Shea (aka Jeanie Barton).

Nottingham has run a Light Night of their own in the city for many years now, so it was about time that we had one of our own. And for a first attempt, it was spectacular, with something for just about everyone, and all with easy access. 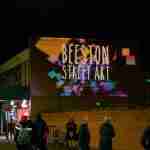 The main event was the switching on of the new neon sign at the Interchange, that had been designed by members of the Beeston Street Art group and paid for by donations. ‘#alightinBeeston’ of course has two meanings; making Beeston less dark and about getting off the tram or bus and seeing what Beeston has to offer. This took place at about 5pm, and it seemed like half of Beeston was there to see it happen. Broxtowe’s Mayor: Richard MacRae said a few words, the switch was flicked by a hidden Jeanie, and the sign glowed green in the ever darkening sky. Richard observed that it was good to see so many people out and about. Art, light and music were to be seen from Broadgate to Chilwell High Road. The Rylands were also involved with events down by the canal and at the Boat and Horses (see Lulu’s coverage of that in this issue), and there was a small satellite event by the shops on Central Avenue.

Instead of writing about the things on offer, I’ll let my photos do the talking, as there was so much on offer. I inevitably missed some things; namely drag artist Dixie Rect and the Sound Catchers. Unfortunately, Fields of Fire had to pull out at the last minute due to illness. I also didn’t manage to watch all the films that were being screened at the Parish Church, which included ‘The Year of the Roses’ made by Italian artist and writer Roberto Alborghetti, who is no stranger to Beeston, having visited almost every year since 2015. 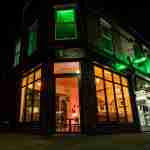 With so many happy and excited people milling around the town, this meant good news for shopkeepers and eatery owners, as they stayed open late to catch the passing trade. Queues outside various places was a healthy sign that sales were good for them. People were milling around all evening taking in everything on offer.

Requesting feedback through Beeston Updated, it clearly shows how much people enjoyed it.

“Great things happen when people come together, diversity and inclusion shone Saturday night and it was my birthday” – Shaun Dannheimer

“Samba collective. When the rhythm comes into my head, I find myself smiling and moving involuntary” – Stephen Miles 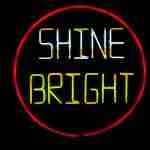 “The Oasis church did a truly amazing job of keeping everyone warm with free hot chocolate. We even got whipped cream and marshmallows on top! Much needed as it was a cold evening. The whole event just shows what an amazing community we have right here in Beeston. We also loved making the LED creations and the fact that there was so much to explore, the event really showcased the new modern Beeston” – Fleur Delaney

“The feeling of belonging to a community was lovely” – Naomi Atamaniuk

“I loved the chaos of it. Something new around every corner. We had a map, but kind of ignored it and wandered round…It felt a bit like a second mini-Christmas, which I really needed after a long, dark January. The drag butterfly, the samba band and the umbrella octopus were the things I loved most. – James Hind

“It was great to see families and people of all ages enjoying the friendly, fun atmosphere. Beeston was definitely ‘alight’” – Jayne Heal

“It was lovely to see so many people – families, couples, singles – all out and about chattering, singing, laughing and dancing. The Beeston community at its best” – Jules Bellingham 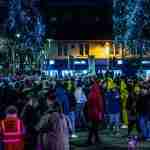 I caught up with Jeanie a couple of days after the event, just so she could get her breath back, to ask her how she thought it went. “It was simply phenomenal, and we were honestly so surprised as to how popular it was. Way busier than any Nottingham Light Night that I have ever attended. I want to give the highest praise to all the volunteers and those who got involved, giving their time and creativity for free. Also, all the installations who participated so impressively.

Thanks also to Broxtowe Council for trusting us with the majority of Beeston’s EU ‘Welcome Back’ fund for the temporary attractions.”

“Our permanent neon artwork #alightinBeeston, was organised by the Beeston and District Civic Society and paid for by crowdfunds and sponsors C P Walker & Son, Arc Cinema Beeston, The Victoria Hotel, Beeston, Dave’s Window Cleaning Services, Rylands Flooring Distribution Ltd and Ways Pharmacy plus a Borough Council Community Grant. Also special thanks to Neon Creations Ltd for building it and Terry from Slater Electrical who installed it”.

“If there is more funding found going forwards, we would like to repeat the venture, possibly involving Beeston’s sizeable Chinese community as it seemed to coincide with their Lunar New Year. I am so proud of Beeston Street Art and its continual organic expansion and popularity. It is definitely one of the greatest things that I’ve ever been involved in and met so many friends through it”.

“Looking through some of the comments that have appeared on social media, it can rightly be called a success”.