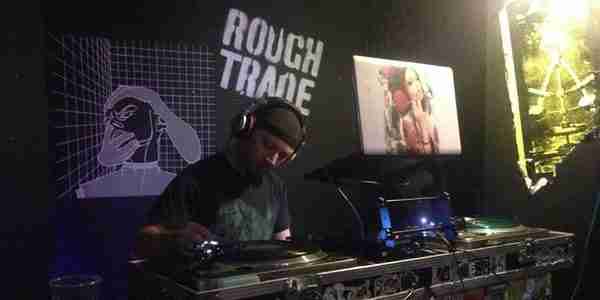 Confession time. I have had a major crush on records for most of my entire life, although I am not able to tell you why or how it happened, I was drawn to record shops like Orbit Records in Long Eaton or Selectadisc in Nottingham like a moth to a flame. I have spent many a day idly scanning the treasures in Rob’s Records while also trying to ignore the OCD in me that screams that there needs some kind of order to his hectic ongoing collection. It’s the artwork, the ownership, the fact that records are living a well over due resurgence. I decided to chat with fellow local record enthusiast Rory James about love, life, his 10 most influential albums and all things musical…

“First vinyl I ever bought. I am not fully sure, as I have been collecting since I was about 8-10 years old. I think it was a second hand copy of Metallica’s Master of Puppets. Metallica had come on my horizon and I thought wow, who are they? Then played them so much that I killed them beyond repair. My first ever purchases of music were actually tapes.

I was living in Hull where I was born and had really started to focus on music. It was the late 70’s/early 80’s and music had caught my attention massively with Toyah and Adam and the Ants, as well as many other new wave/punk and electro acts of the time mostly via TV.

I had been saving my money to buy myself some music and I bought three albums all on tape as my first ever music purchase. These were The Beatles ‘Sergeant Pepper’s Lonely Hearts Club Band’, ZZ Top ‘Eliminator’ and The Cars ‘Greatest Hits’. I still own the tapes even now.

Music was actually in the blood for me without me knowing it. Mum was a massive fan of The Doors and many other bands from back in the 60’s and 70’s, my dad played guitar in a band and sang and they named me in part after his guitar hero Rory Gallagher.

I was heavily influenced by the whole hippy rock thing my parents were into. My actual earliest memory of owning vinyl would have been a record I still own now. It’s not the original copy from back then, but I re-found it in recent years as a collector, which massively brought memories flooding back. It was a Disney record for Mickey Mouse’s Christmas.

I also remember before moving from primary school to secondary school when electro music and hip hop hit the airwaves. At that age I was trying to work out my own identity. I got massively into Michael Jackson for a short while, then discovered Metallica, WASP, Sabbat, Bon Jovi, Guns ‘n’ Roses, Def Leppard and so on.

My mate at the time who lived not too far away was a huge rock and metal fan. Alister was his name, he showed me WASP records and lots of skater thrash bands and that was it. I was hooked on the whole thrash metal scene. Oh yeah, and then came along Iron Maiden with their images of Eddie. I bought myself a denim jacket, lots of band patches mainly of Maiden and grew my hair long.

By the time I was 15 we moved to Nottingham. I’d watched a documentary on TV by Arena all about the UK rock and metal scene, had seen Rock City on it and a load of head bangers moshing around the dance floor and ‘I thought I want to go there one day’. Let’s just say I lived in Rock City from the age of about 17 right through into my early 30’s. So music and vinyl have been massive parts of my life.

Musically, vinyl was always in the house as a kid, I loved the sound, the crackles and the pops. The other reason I loved it and still do is the artwork, that fact you had something to look at, read, explore, work out what was engraved on the run out in the centre of the record and the messages you could find from the bands to the fans. It was and always has been a journey.

I moved away from vinyl and tapes in the 90’s, had a brief but limited journey with CD’s but got into downloading music when the internet came along. But by that point I had already amassed quite a large collection. But I returned to vinyl around 10/15 years ago, when I started buying second hand from charity shops,

I then started going to markets and charity shop warehouses, offering cash for larger job lots, often walking away with tubs full of vinyl for not much money. Then with the resurgence in vinyl for bands and collectors I started buying new vinyl. The first one I can remember buying was David Bowie’s ‘Black Star’, which was a massive deal as he passed away literally 2 days later. It was at that point I saw the value in vinyl. I bought the LP for £25 brand new online, and if I remember rightly, the day he died the value went up to at least £100.

So I have many, many stories all music related through all the years of buying vinyl, from meeting bands, sitting in recording studios, working with the drummer from Sabbath in Long Eaton, working for Ferocious Dog (I built their first website and did photography for them for a time). I have even done photography once at Rock City for the Levellers, oh yeah and I was DJing in town, mainly at the Maze and Albert’s in between bands until COVID hit.

I have roughly 6-9,000 records, CD and Tapes in my collection. I also regularly buy new vinyl online, usually limited editions. My most recent purchase that was delivered was Gary Numan’s new album ‘Intruder’. Great album and great artist. I am waiting for the delivery later in the year of the latest Fear Factory LP (back to my metal thrasher routes). 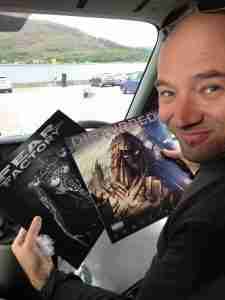 So where do we go from here…I have been gifted or bought friends and family’s entire collections many times because I am well known for collecting and selling the odd bit also. I have built up a very wide collection of genres and knowledge to go with it. I always wanted to end up working in the music industry, in a shop or as a roadie or something but as much as I have delved in a slightly it never happened. I currently work for Public Health England as an admin manager helping fight COVID, its funny where you end up isn’t it? I’d still love to head into the music industry especially with the skills and knowledge I have built up.

10 most influential albums of my journey:

Tool – ‘10,000 days’ – such an amazing album, every time I listen to it, it puts me right in the same place, it’s very dark in places, atmospheric and when I am really feeling quite low it really helps me process the darkness inside and empowers me to let it go.

Fields of The Nephilim – ‘The Nephilim’ – If you don’t know this album then you’re really missing out.

More recently my most loved and cherished album is by a band called Heilung and the LP is called ‘Ofnir’. This is Pagan/Viking music played with many traditional instruments including bones. It may sound crazy to some but take a listen and watch them online, if you can go see them live, it’s very earthy and grounding music.

Electronic music was (and still is) a huge part of my musical journey, and none more than The Prodigy. I would be straight on any dance floor or anywhere I could (including illegal raves in the 1990’s) when they came onto the speakers. I have loved them right from the start of the ‘Experienced’ LP but have to say the best LP was and always will be ‘Music for the Jilted Generation’. I actually own one of only a few original prints from the artist that produced the artwork for that album, framed on my office wall. I am so proud of that print and everything it says about music and society. I have never told my partner how much that cost me to get hold of, but to me it’s priceless.

Lastly is one considered a flop for the artist. I only own a copy on CD as the vinyl copy is quite hard to find (especially in mint or near mint condition). It is Billy Idol’s ‘Cyberpunk’ record. I love the fusion of rock/punk and electro, and this has to be my fave type of music nowadays the fusion of rock instruments with electro. This album also added in for me my crazy love of sci-fi. I believe even Billy Idol himself considers this LP to be a flop for himself mostly financially, but for me regardless this has to be one of his best.

Oh…one more…one more to add! Number 11…and I really, really could just keep going…the last has to be Daft Punk’s ‘Tron Legacy’. OMG what an album, what a film!

I also run my own Facebook page called Dark-Side Records – yes it’s my love of Star Wars and sci-fi crossed with my love of music. I use it to share anything musical I find that I want to share with others. Also to sell a few bits when I don’t want them or people use it to contact me if they have collections the want to offer. It’s a bit of fun most of the time but it’s who I am. I use it when I DJ either out at gigs, club nights in venues or when I DJ online. Basically it’s my way of sharing my musical journey with others. Music brings us all together.”