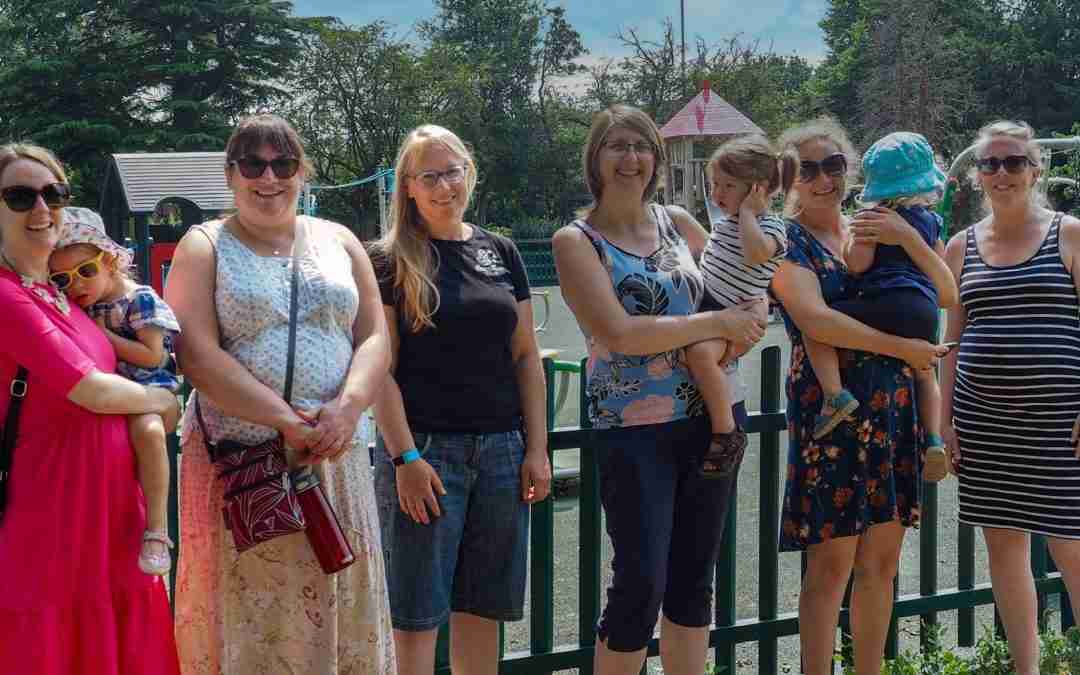 Not only is the Beestonian celebrating its tenth birthday this year, but the same number of candles have been blown out on a cake belonging to the Beeston Mum’s Choir. Unless you are a parent of a baby or toddler, you may not have heard of this local group, who get together to sing songs, whilst their offspring play to their heart’s content. I contacted Rose Norman, after seeing her post on Beeston Updated about the groups’ anniversary. She in turn contacted the choir’s musical director Sarah Taylor, who answered all my questions, and some of the choir met me for a quick photo. From the left are Kate, Rose Norman, Sarah Taylor, Emma-Jayne, Rose S and Emily.

I asked Sarah, when did the choir start, who started it and why? “The choir was created in February 2011 by myself and a good friend. We both had young babies and were missing singing in choirs, as we weren’t able to get out in the evenings to conventional choir rehearsals. I had been involved in running choirs since we were at university together and she asked if I could make us a choir where we could bring our babies, but sing for us, not for them”.

How many members do you currently have? “Membership is quite fluid, as many people join us for a few months whilst on maternity leave and then must go back to work. Others plan their return to work, so they can still sing with us, and some come back for a second (or third) time, as they have more babies! Usually, we will have between 15 and 20 singers at a rehearsal (and that means 20+ babies and toddlers). Regular numbers have gone down slightly over this past year or so as Zoom choir singing is not for everyone. We’re hoping to be back to regular in person rehearsals from September, so hopefully numbers will pick up again”.

How have you all still managed to keep going since lockdown? “We’ve kept going throughout the last 16 months online, and actually had two rehearsals per week for most of that time. One at our usual 10am time and one at 8pm, because Zoom with a toddler in the house is hard! We’ve actually managed an in-person rehearsal on Monday 19th July, just as a one off before the summer holidays. It was wonderful to be back together and to sing together again. It’s not the same being at home singing on your own”.

What sort of songs do you sing? Is there a favourite amongst the group? “The only rule we have in terms of songs is no nursery rhymes! That’s what makes us different from other singing baby groups; the singing is for the mums (but the kids do enjoy it and pick up a lot of the songs themselves). We sing a real mixture of music from classical and folk songs, to songs from the shows and the usual pop tunes. We’re usually in two or three part harmony, but everything is taught by ear, so there’s no need to be able to read music. I think if you asked the members, they would all name a different song, but our signature tune is probably ‘Bella Mamma’, which incidentally, we have just released as a virtual choir recording to mark our 10th anniversary. We sing it as a warm up at the start of every rehearsal. It’s a really simple round which sounds glorious when it’s in full flow and the words mean Beautiful Mother. Quite apt for us”.

Are dads allowed in the choir? “This is a question we keep asking ourselves. But in truth, no dads have ever asked! In theory there’s no reason fathers can’t join us. However, the music we sing is arranged for upper voices, so they might find some of it a bit high! If we did find out that we had a group of dads who wanted to join I guess I’d have to find some new music with lower parts”.

Have you ever performed in public? Any inclination to do Beeston’s Oxjam for example? “We generally do two main concerts per year, and other performances to support local events, such as at the Canalside Heritage Centre and fundraisers for OpenHouse Nottingham, the charity we support. in December 2019 we were also lucky enough to provide ‘backing vocals’ for Jonny and the Raindrops’ Christmas gigs. That was totally different for us and loads of fun. We’ve never done Oxjam. I’m not sure why but we would be keen to be involved”.

Are any members of the mum’s choir, in say the Beeston Rock Choir? “I’m not sure about Beeston Rock Choir, but we have had members who also sing with Beeston Voices. It seems to be the choir members will move on to once they can get back out in the evening”.

Where do you meet, and how often? “We generally meet on Mondays at 10am during term time in central Beeston. We need to confirm our venue for September onwards, so details will be on the choir’s Facebook page”.

And as Sarah mentioned, you’ll also be able to find out where their meeting space will be when the group reconvenes in the autumn.