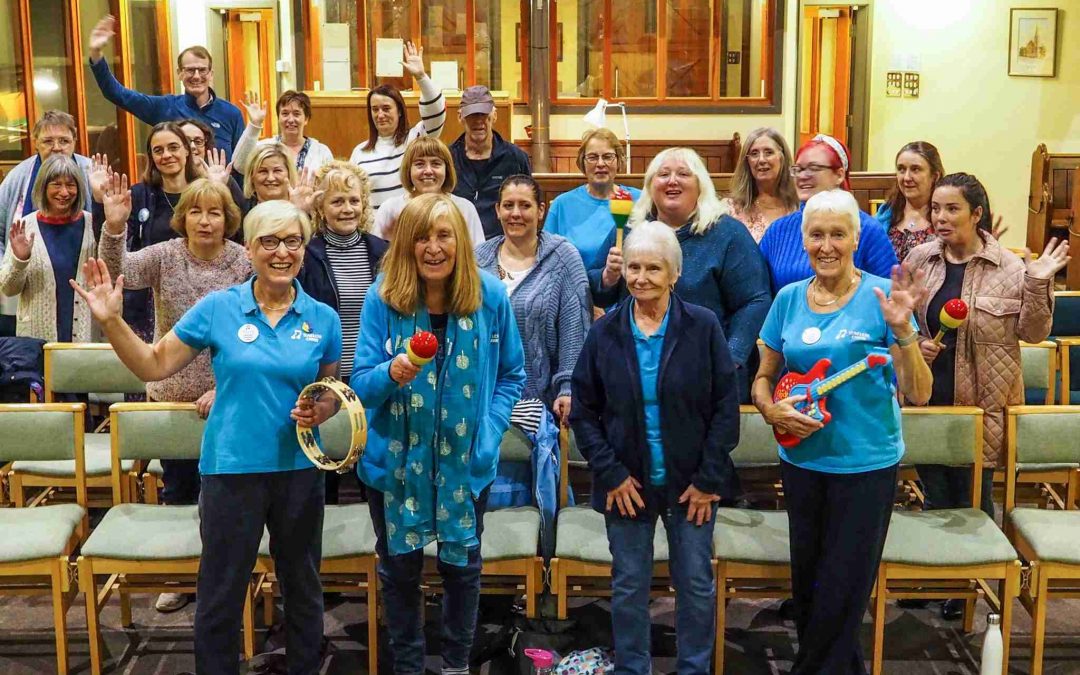 Who Likes to Sing? Go on, be honest, you do. But of course, there a chasm between wanting to sing, and being able to sing. But that gulf doesn’t exist for members of Beeston’s Tuneless Choir, or any of the 30 other groups across the country.

Created in January 2016, locally in West Bridgford by Nadine Cooper, who was put off from joining local choirs, as she was lacking a voice that would fit in, so she thought to herself, why not create a choir especially for people who can’t hold a tune. So, with the help of Bernie Bracha, she did. It was a success, now there are franchised groups in towns from Newcastle to Southampton.

I went along to one the meetings of the Beeston group, which is held at the Methodist Church on Chilwell High Road, to see what went on. When I arrived, they were going through some exercises to warm up those untrained vocal cords.  I was greeted by choir leader Mary Hastings, a Scot, who arrived in Beeston in 1984 and the only person with some actual musical talent, with her Grade 5 in music and the ability to play the violin. The group have been on tv, and in September 2019, they sung on the stage of the Royal Concert Hall to the paying public, as part of a large concert organised by a local radio DJ. They’ve also sung at Beeston’s Oxjam and at the railway station. They also lend themselves to local care homes and raise money for charity.

Tonight’s theme was Elvis. So, the evening began with “Return to Sender”, with Mary setting the pace with a mean playing of a tambourine and conducting with arms waving around like Dr Magnus Pyke used to do on science programmes in the 1980s, with the choir clapping or shaking some maracas, as they sung their way through the hit from 1962. The words appear on two large screens behind Mary, which she has typed out karaoke style, but without the inclusion of alcohol. Mary gives a little background or history to the songs she has sorted out for the evening, just before the commercially made backing track starts.

The first half finished with the hit by Kirsty MacColl; ‘There’s a Guy Works Down the Chip Shop Swears He’s Elvis’. A cheeky inclusion by Mary. It’s then break time, and I get the chance to ask Mary a few questions. I first ask about how many people are in the group. “We used to have about 150 members. But then Covid hit, and singing was one of the last things allowed due to the perceived risks. I’m not sure how many we have now, as people’s lives have changed so much. Things are so different now”. “What do people get out of coming along?”, “It’s good for their well being, confidence, mental health, to make friendships and enjoy social occasions. It brings people together for a singalong”. One member with health problems explained to me how by using the breathing techniques that she has been taught has helped her with her illness.

I then ask about how the songs are chosen for the evening. “We have a request box, where people can write down their suggestions. Nadine will suggest themes. We had one recently about ‘bad girls and good guys’.  “Are there any favourite songs that people like to sing”? “ELO’s Mr Blue Sky is very popular. “High Ho Silver Lining, Build Me Up Buttercup. That sort of thing”.

Coffee cups are put away and people return to the pews for the second half of the 90 minute session. I listen for a little longer, before putting away my notebook and waving goodbye to the group as they murder another song of Elvis’s. But actually, when they all sing in unison, they actually sound like a proper choir. One that is in tune, and one that would get four ‘Xs’ from the judges on the X Factor.

If you would be interested in lending your vocal talents to the group, then they meet every other week, on a Wednesday evening. There’s a small cost to joining and using the room, but it’s a good way to meet new people and make new friends.