Is Splendour a pale-imitation of a proper festival, or something quite special? Lord Beestonia and Prof J tentatively grab a press pass and promise to not sneer at jugglers…

Splendour is Nottingham’s festival, and with a liiiiiitle stretch of the imagination, Beestons. After all, it’s setting – the sprawling Elizabethan deer-park / Italian POW camp / Batman’s gaff, Wollaton Park – is on our borders, and with the wind breezing West when it’s on you can clearly hear each note from the mainstage while sitting in one of our coffee shops.

Yet we’ve never really covered it in The Beestonian. Which is weird, as most of the team are avid festival-goers, and would keenly leap to attention and grab a notepad and fineliner should I wave a free ticket and throw a deadline their way. So why have we not got involved before? 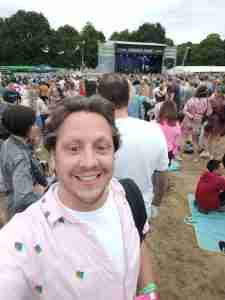 It’s me. I’m the problem. I’m the stick in the festival mud. You see, I’m a man in his middle age, resplendent jowls and all, but once…once, many years ago, I was a Festival Person. Bitten by the bug at Glastonbury ‘92, stick a stage in the field and there I was, down the front, reeking of a cider that could fuel Apollo missions, dancing away as the sun, or more likely, the rain, beat down. Glastonburys. Readings. Pheonixes (Phonecies?): my wrists bore many bands. Later, when no longer as poor as I once was (Glastonbury ‘94 was done on less than £25) I flew to festivals in Europe.  And that’s where it ends: mid-Summer, in Southern Spain, I’ve spent the morning at a waterpark, the afternoon on the beach and the evening watching The Pixies. Nothing can top this. I’ve reached Peak Festival.

Nothing can top this, so why bother? Two days later, I fly back to England and hang up my festival cloak for good.

But here I am, nearly two decades on, standing in a field while a man in a hi-vis wraps a wristband round. Splendour have kindly invited us over to have a gawp around, so we are in a very familiar place which looks very unfamiliar. Stages and marquees throw the wide expanses into weird perspective. A glimmer of nostalgia from the nineties Heineken Festivals that would appear here every July (free, as long as you didn’t mind only having Heineken to drink for the duration. Tough choice). I’m with my fellow  co-founder of The Beeston, Prof J, who also has a mortgage, a marriage, two young children and the inevitable accompanying greying scalp. 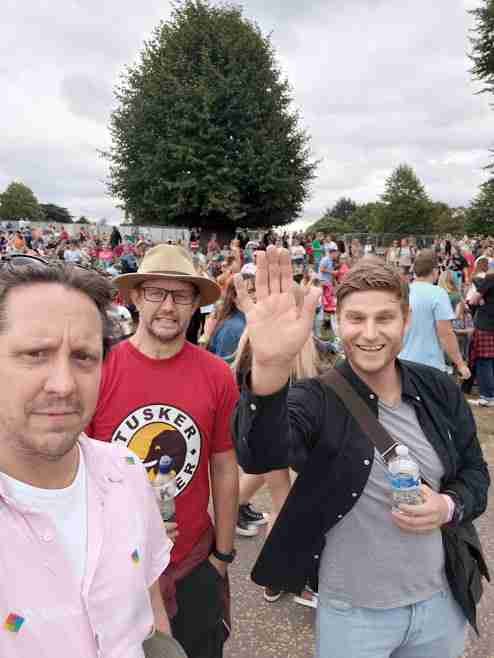 The first band hit the main stage, and more out of duty than desire I get close to see if they are any cop. They aren’t just any cop, they are more cop than a million TJ Hookers dancing with Juliet Bravos (ask your dads, kids. Then get your dads to ask their dads). A scream of guitar, and ALT BLAK ERA send the deer deaf with a set that sounds like the inside of your head when on a rollercoaster: this is a good thing. Winners of NUSIC’s Future Sound of Nottingham 2022, sisters Nyrobi and Chaya deliver what they describe as Trap Metal, and do so much energy they probably left scorch marks on the stage. For a first dabble back into the waters of Festival Land, it’s a good one. 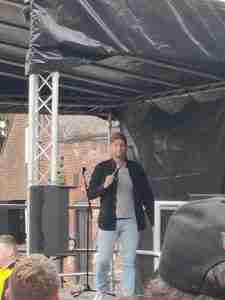 The site is filling up nicely as we head off to the comedy stage, over in the Courtyard. Our very own SCOTT BENNETT is opening up, and he’s dismayed at how empty it is ‘This’ll be like playing a family picnic’ he says, anxiously. But lo! People begin to stream in, and soon the place is packed. This is courtesy of the way stages are staggered so as one stage finishes, another starts, allowing the punter to see as many of the acts as possible, and avoid -if one is prepared to sacrifice an encore / opening number – too many clashes. Scott opens to a packed crowd, slaying them with his exasperated take on life with no-filter: I can’t repeat most of what he said – read his column – but you’ll never be able to look at teabags in the same light again.

Onto HEATHER SMALL from M People, a band I spent most of the nineties bitterly opposed against, due to their sheer anodyne, lifeless pop. But back then I’d be up until dawn trying to convince myself the latest poorly C90 bootleg of some obscure American thrash punk band or Dutch Techno bod was genius and not just a series of noises in an order that didn’t give a shit to the listener but the NME / MixMag had told me was an essential classic. Tastes change. Perhaps middle-aged, milder, mortgaged me would appreciate the genius of the erstwhile empress of Mancunian pop?

Nah. It’s still as alluring as being stuck in a Jeremy Clarkson-populated elevator, but the crowd -a real cross-section of Nottingham’s population – are enjoying it, so who am I to begrudge? SLEEPER are less easy to forgive: a band that snuck in with the crush of Britpop until everyone but a devoted few realised that they made Echobelly look like wild experimentalists. They launch into a cover of Joy Division’s Love Will Tear Us Apart. Prof J looks at me, mouths the word ‘No’; and we leave, less our ears begin to bleed.

The site is now heaving. This is the first post-pandemic Splendour, and the first two-dayer for some time and people are intent on a good time. The queues for the beer-tents and food grow massive, though toilets are generally accessible. It’s now feeling properly like a festival, but with one key difference: I can pop home.

There was a time I’d hitch to festivals, an experience often as picaresque and hedonistic as the festival itself. Then I’d fly to them (once to the wrong airport, but thankfully the right country). Today, I got the 36 NCT bus, and the same bus whisks me off-site and back to Beeston so I can say goodnight to my kids. This is the beauty, previously unrealised, of having a festival on your doorstep. Yes, I can let loose at a festival AND be a devoted family man, all through the possession of a £5.60 Robin Hood ticket. Ace. 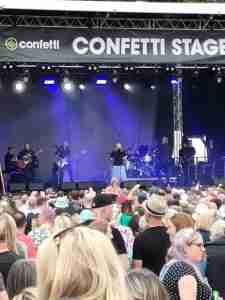 I whisk back, and just in time to watch the goddess teen-crush that is BELINDA CARLISLE deliver a perfect set: to a now jubilant, sun-soaked crowd. Heaven is indeed a place on earth, and right now it has an NG8 postcode. I have hit full-festival feeling. I miss CRAIG DAVID, which is not the greatest shame in the world considering the feedback I get from those who did catch him ‘He was just up there arsing about. We thought he was still tuning up’ is one measured critique. SUPERGRASS however are your solid power-pop four piece who work excellently at festivals: a rush of silly, singalong fun that has hundreds of middle-aged men getting misty eyed at the youthful exuberance of ‘Alright’, before waistbands pushed rose with with age, and ‘running free’ was something that wouldn’t require a generous smearing of Voltaral before and after.

Richard Ashcroft skulks onto stage as night begin to fall, looking like John Cooper Clarke without the humour. He does some Mancunian drawling stuff before launching into the ploddingly dull solipsistic guitar stuff that sounds like the cat in the bag that was waiting to drown has escaped, slung on some skinny jeans and told to get on stage. But again, others are clearly enjoying it, and by now I’m three beers, full of festival cheer, and even The Verve frontman cannot drag me into his cave of misery. I head home, and find myself in conversation with a lovely family of four on the bus. Mum and dad have gone for some nostalgia – the dad loved Richard Ashcroft, which makes my previous paragraph a little awkward, and the kids, Evie, 7, and Jacob, 4 enjoyed ‘dancing; and being silly.’ 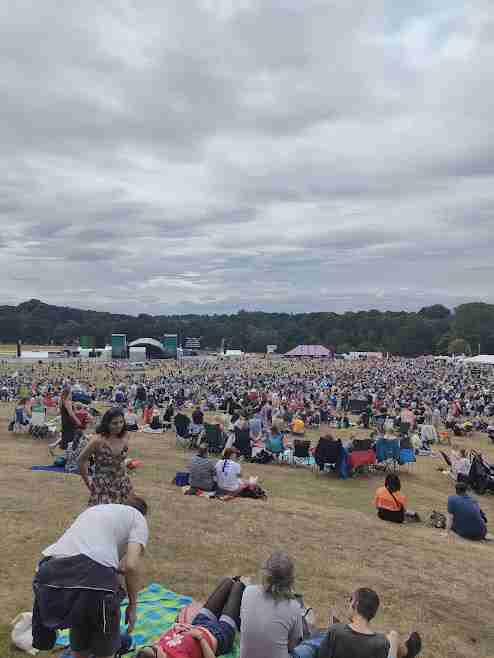 They’re clearly amazed at the day, and that’s it, isn’t it? Splendour isn’t Glastonbury. It’s not Benicassim, Burning Man, Rosskilde and so on. My worry that those comparisons would be instinctively drawn and taint the day are exposed for what they are: snobbery, and a terror at my own impending mortality. Of course, to be 18 again and scrambling over a Somerset fence half-cut on farmhouse scrumpy might have its attractions, but that’s not going to happen and plus, nostalgia is a demonic propagandist as Sleeper probably proved to many disappointed former indie-kids today.

Nah, give me a festival with convenience, with real fun, with a fair cross section of the community, giving a real feeling that this is OUR festival, this is OUR fun.