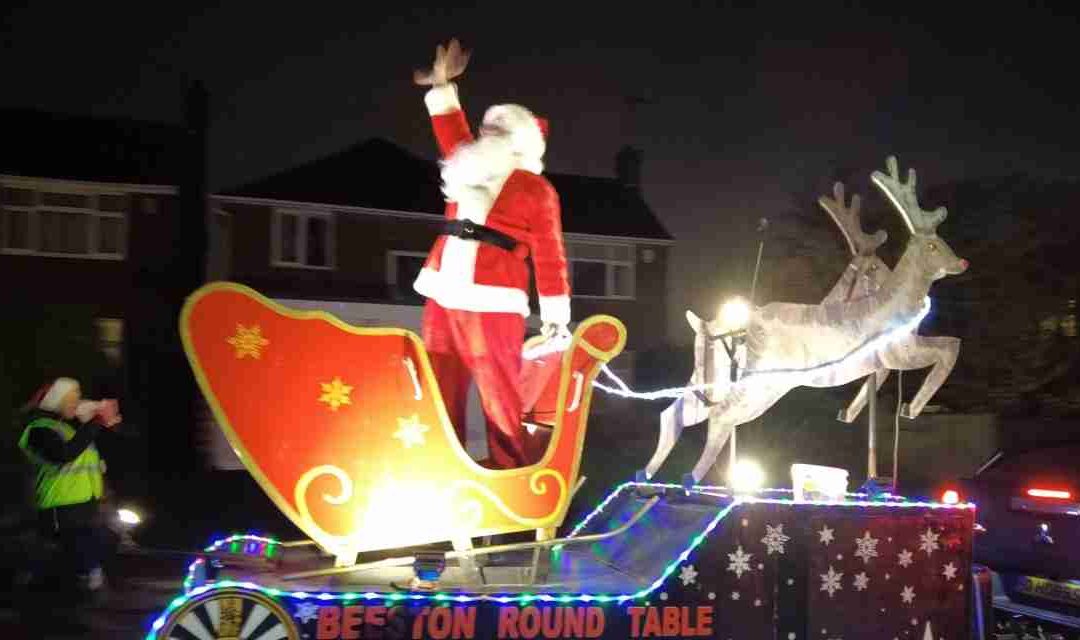 Besides seeing the now infamous wonky Christmas tree in the Square, another local highlight of the festive season, is the Round Table’s Santa sleigh, as it moves around the area over the first two weeks of December, raising money for local good causes. But who are the mystery people behind this very popular annual event? I spoke with Ash Gardner in the Crown and attempted to find out.

“Many people are confused as to who we are. They think we are a secret society like the Masons, but nothing could be further from the truth. We are an activity club that is open to any male, or someone that sees themselves as male between the ages of 18 to 45. There is also a separate group for ladies of the same age group called a circle, and two groups for men and women of 46+, the 41 Club and Tangent.”

I asked how the whole movement began. “It started in Norwich in March 1927, by Erminio Marchesi, who was a member of the local Rotary Club, but wanted to start a club that was exclusively for young men, just like himself. So, he did. There’s around 35,000 men involved in many countries across the world. India and South Africa have the biggest memberships, but it’s not so popular in North and South America. Beeston’s has been going 65 years.” 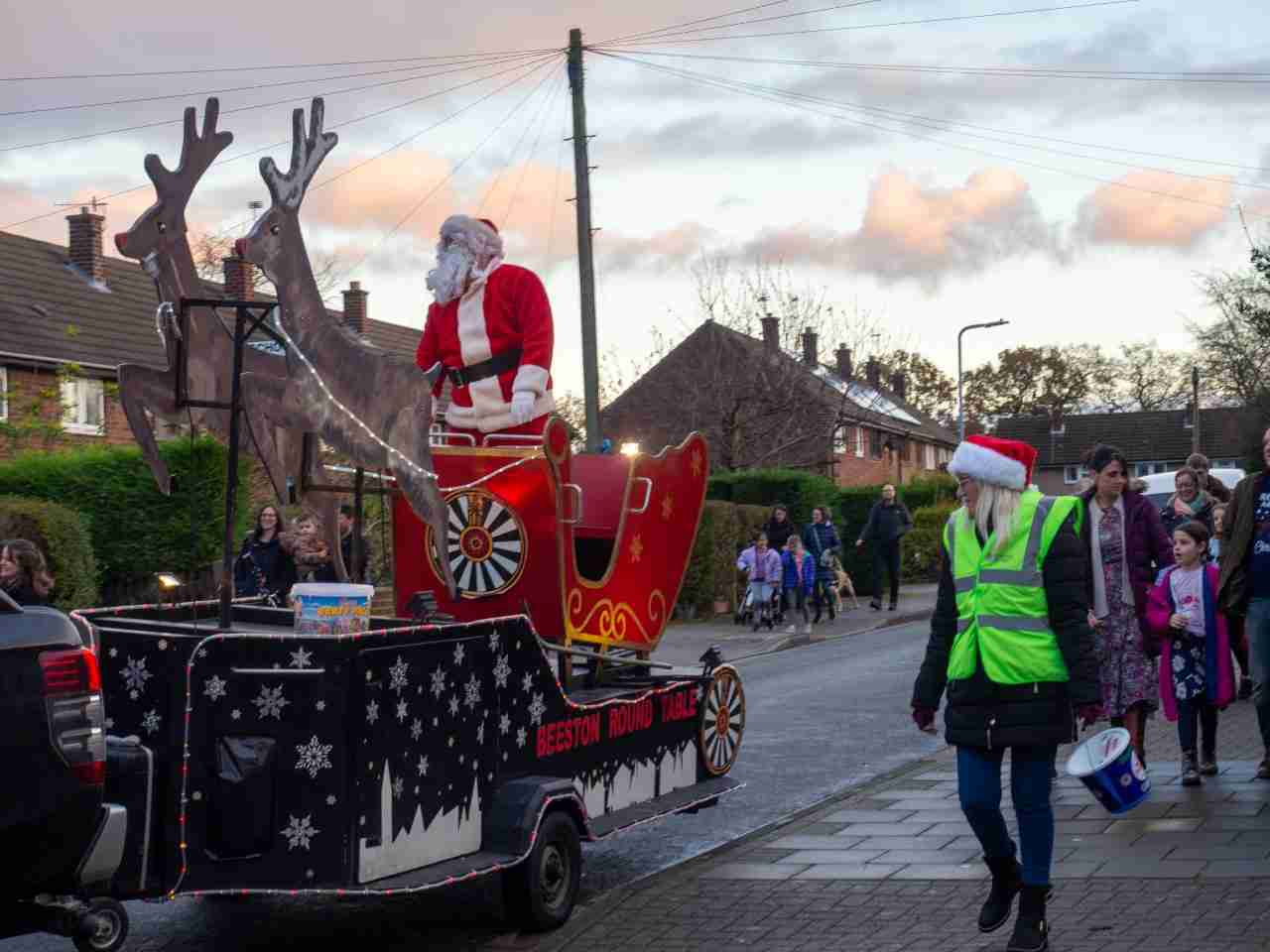 “What are the aims of the club”?  “We uphold civil life. Looking after the community, and although we aren’t a support group as such, we try to get our members to talk over their problems, as it might help them, as we wouldn’t like to lose any to suicide. The only subjects that the society doesn’t talk about is religion and politics.”

“What sort of things do you get up to?” We meet twice a month at the Star, all the year round. We do all sorts of things. Abseiling, brewery tours, we’ve even been to see how lasers are made. We do something called a ‘Peddle and Pint’; a cycle ride with a beer at the end of it. We often get once in a lifetime opportunities to do something different.  One amazing event is that we do a sort of exchange programme, where people from different countries visit one country a year. We’ve been to Belgium for three nights. It’s a bit like a school trip for adults. We’ve also been on a skiing weekend to Sweden.”

Turning to the subject of the famous sleigh, I was interested to learn more about it, and how much money it raises during the event. “We’ve had the sleigh 45 years now. In fact, we really need to get a new one now. We usually raise around £8000 over the 15 nights we do it. Generally, the money goes towards Christmas meals for the pensioners that live in the nearby courts. We also help local groups, the needy, or if anyone needs some specialist equipment. It’s just a matter of applying”. Looking through the groups Facebook page, I noticed that a couple of years ago, they had donated £250 to the OWEN Charity, set up in the memory of Owen Jenkins, the 14 year old lad who sadly drowned saving others from Beeston Weir.  Next month we are joining up with the Arc Cinema in Beeston and have bought 46 tickets, so children can see a film at 5pm, and adults can watch the new Avatar film at 7pm. People just have to a apply for a place.” 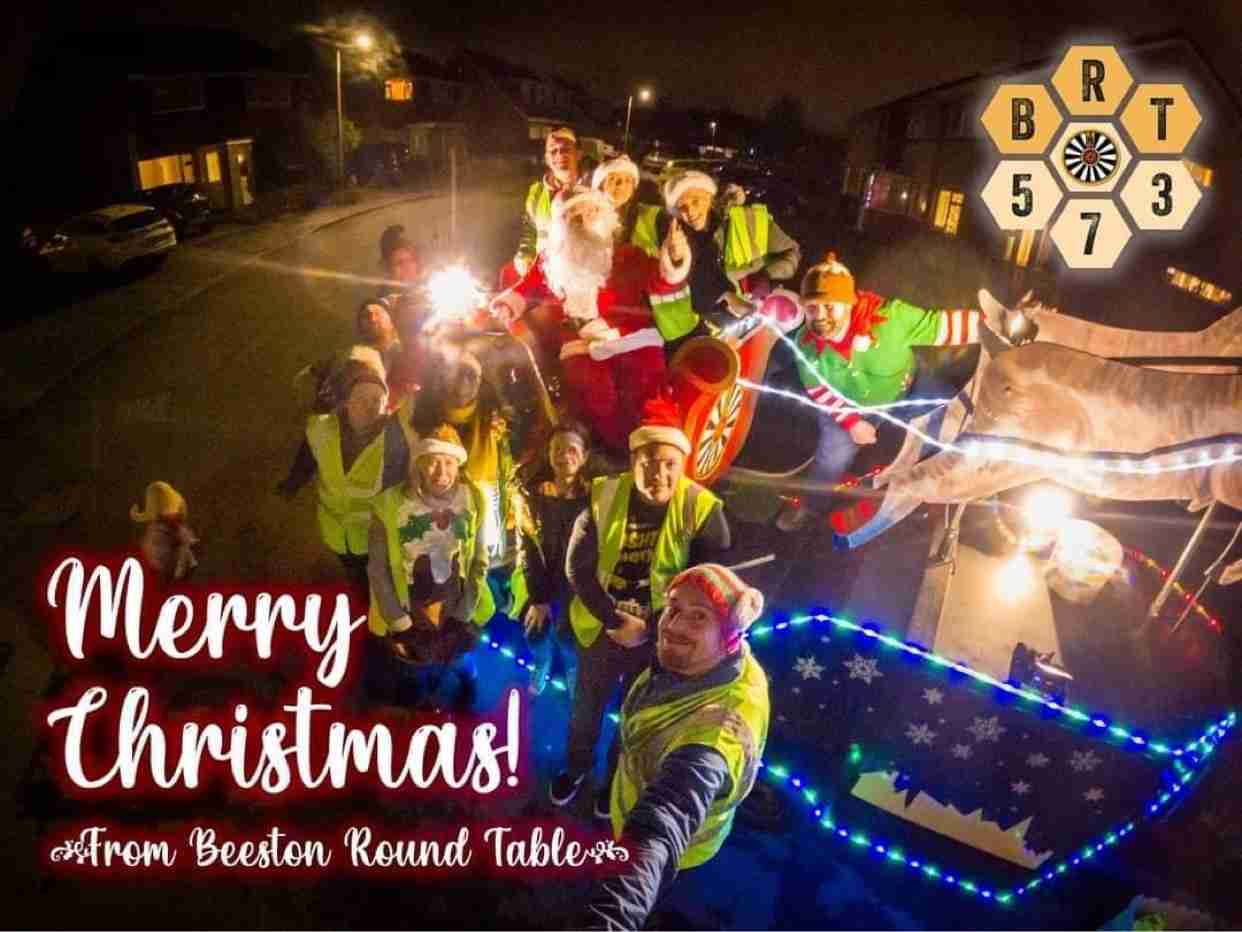 “When is this year’s event going to begin?”. “We start on November 24th, at the switching on of the Christmas lights in Long Eaton, then it’s the 1st of December in Toton, where finally we finish up on the 15th in Bramcote Hills. “Will there be a fight to who gets to be Santa?”.  There’s eighteen members involved in the sleigh, and only three love being Santa. I will be driving the car, which has been kindly offered by Jaguar-Land Rover.”

To keep up with information about the Round Table and their Santa Sleigh, they have a Facebook page called appropriately ‘Beeston Round Table Santa’.