I’d like to think I’m something of a dab hand at Top Trumps, having definitely been one of the better players at Stevenson Junior School in the early eighties. 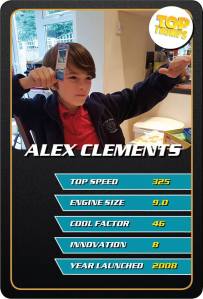 Not many could walk away unscathed from my mastery of First Division footballers, a stack of red-faced, blue-legged men with universal awful hairstyles and expressions that bordered on the Neanderthal. Being pretty awful at most other sports, I took pride in this.

So when I find out a Top Trumps Champion is living in Beeston, I jump at the chance to interview him, and challenge him to a game. He accepts, and so I meet Alex Clements, 9, a pupil at Roundhill. We face each other at a table, and his steely gaze tells me this might not be the walkover I expected.

He selects the pack: Animals, appropriately enough, as he recently took part in The Top Trumps Championship at Chester Zoo. As he deals, he lets me know he’s been playing since he was 3, an obvious attempt to demoralise me before we even begin. I tell him that while that is young, I’ve played, on and off, for four decades. The first card goes down. He flukes a win.

He knows around six complete packs off by heart which is the key to being a Top Trumps champ.

He then flukes another, and a further seven more and I’m just about to cry ‘FIX!’ (or just cry) when I beat him as my Sumatran Orangutan has a higher Risk of Extinction rating than his rhino. ‘YES!’ I cry, punching the air. I’m very sorry the Sumatran Orangutan is disappearing because of man’s greed…but a win’s a win.

He tells me that his favourite pack is Awesome Animals, and his favourite card Scruffy the Monkey, who has a brilliant mischief rating. He knows around six complete packs off by heart, which, he tells me, is the key to being a Top Trumps champ. He gets another strong run, taking my meerkats, giraffe and aardvark. I’m in trouble now. Desperately, I try and distract him by asking him what he wants to be when he grows up. ‘A professional Top Trumps Player,’ he tells me, but is encouraged to think again by a disapproving noise from his mother. ‘Ok,’ he says, reconsidering. ‘A ninja’.

If ruthlessness is a necessary quality in ninja studies, then Alex has it, ripping through my final few cards and claiming an easy win over his shocked opponent, who can only ask if he is going to have another crack at the title next year, after coming third – better than Murray at Wimbledon and the English football team EVER – in June. ‘No, but I am going to coach other players to be good enough to make it to the finals,’ he explains. As I sit, bereft of cards, thoroughly trounced, I realise I’m in the presence of a card master, and was a fool to think I stood a chance.

Next issue: Lord Beestonia loses a game of darts to a new born.