Beestonian to run London Marathon in aid of diabetes research

Written by Isaac on April 15, 2019. Posted in Isaac Seelochan, Sport. Leave a Comment

On the 28th April, Beeston resident Stuart Baird will attempt to run the London Marathon to raise money for vital research on diabetes after his son James was diagnosed with type 1, the most severe form of the disease.

“He lost a dramatic amount of weight in a very short period of time and he was rushed to the children’s hospital. it was a big shock. Nobody in the family has any history of diabetes,” said Stuart.

Stuart is originally from Leeds but has been living in Beeston for almost 20 years. His love for the town is such that he has expanded his house twice since moving to the area in the late ’90s. 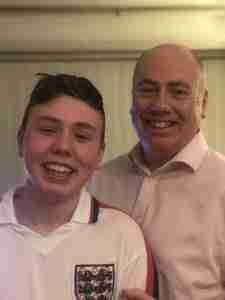 At the start of his sons’ treatment, Stuart was asked by one of the doctor’s if his son would be willing to take part in something called ‘the honeymoon trial.’ “It’s to test the functionality of the pancreas,” explained Stuart. “You’re having to inject yourself before every meal with insulin and you end up with a continuous closed loop monitor, which monitors his blood sugars and that talks to a pump which feeds him the insulin he needs,” he said.

“My target is £2000,” reveals Stuart. “The funds will directly help children on this research trial in Nottingham and elsewhere in the country. The reason why it’s so important to fund these projects is so that young people and children who’ve got type 1 diabetes, can be helped to control there blood sugar’s from a very early age, which means that they will live happier lives and will have just as long a life span as everyone else would,” says Stuart.

“I know not everyone can or wants to run but if you encourage others, it is so appreciated. You never know what that person is running for, or how hard it has been for them.”

Running the London marathon will be far from straight forward. At 26.2 miles, only the Paris marathon is bigger in Europe. In preparation, Stuart had been clocking up plenty of miles when we spoke at the end of February.

“It’s the first time I’ve done a marathon, even though I think I’ve done at least ten half marathons. I’ve already clocked up 180 miles in training over January and February. I’ll have to run next Sunday (3rd March) 16 miles, the next Sunday is 18, I do 3 lots of 20 miles and then one 22 and that’s just before the marathon,” he said.

“If you are raising money for a loved one, the last mile and finish line can get quite emotional – it’s journey’s end.

“For example, the Great North Run finishes with a mile uphill and just as you hit the top you see the North Sea, a beach and around 80,000 people cheering you on to the finish line. It was one of the best experiences of my life.

“When you have your name on your running number, people call out your name and encourage you. It’s a great feeling. I know not everyone can or wants to run but if you encourage others, it is so appreciated. You never know what that person is running for, or how hard it has been for them – a lot have lost children, parents or friends and are running for their memory, as well as raising money” said Stuart.

So what does Stuart hope to ultimately achieve from attempting this mammoth task?

“I want more people to know about type 1 diabetes and the challenges that those with type 1 have to face. It doesn’t just affect the person, but it affects the person’s family because you need to appreciate that they can’t just eat and drink and not care about what they’re putting into there body. They need to constantly think about there insulin and blood sugar levels

“I did run the London Landmarks half marathon for JDRF last year, but it’s not so much about me and running, it’s more about me running for JDRF because I’m a big believer in what they are trying to achieve and obviously James has directly benefited from the work that the NUH (Nottingham University Hospitals) team and JDRF have done. It’s just phenomenal really.”