The Boy with the Perpetual Nervousness: Graham Caveney in conversation with Deirdre O’Byrne

Written by jadekmoore on March 1, 2018. Posted in Jade Moore, Literature, The Beestonian. Leave a Comment

On the snowy evening of Wednesday 28 Feb, at Middle Street Resource Centre, Beeston residents were treated to a talk and exploration of Graham Caveney’s book The Boy with the Perpetual Nervousness. 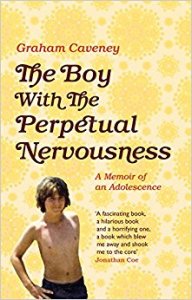 His book, described as ‘a memoir of adolescence’ is a powerful recounting of Caveney’s life growing up in Accrington, from a working class Catholic background. It explores his love of music, literature, and brings to the fore issues such as class, religion, and the abuse he was subject to by his teacher and headmaster at his local grammar school during the 1970s.

Having kept his abuse quiet from his closest friends, and parents, his book comes at a time of recovery from years of mental anquish, drinking problems and trips in and out of rehab. At the start of the event, after everyone has settled with hot drinks, Graham Machin, chair of Beeston Community Resource (BCR), and one of our Beeston Heroes, speaks about the history of MSRC and its role as a mental health day centre.

Attendees of the event were encouraged to donate money towards a fund which helps people with mental health problems when they are in need of emergency support. This was done on a pay-what-you-can basis, and that Caveney agreed was a fitting cause for the event to raise money for.

Deirdre O’Byrne starts off the conversation by asking Graham about how his book came to be written in the first place, revealing a link to the hosts of the event, Five Leaves Bookshop, who had given Graham a job when he proclaimed himself as unemployable. It was then being surrounded by books that struck the right chord and enabled him to begin telling his story. What began as an attempt to rewrite Kafka’s Metamorphosis, became the courageous and endearing book that now exists as an object in the world (something Graham appreciates in books generally).

He’d sent paragraphs to his friend Julie Hesmondhalgh as a way to tell her about himself and his past, and she asked him if he’d thought about having it published. “When writing it, it never occurred to me that it would be published, and that was a good thing, otherwise I’d never have written it,” he says.

He had contacts that would be able to help towards publication, but, “I wasn’t prepared to cash in on those friendships,” he reveals. He then received an email from Julie with the subject heading ‘oops’ saying that she’d sent it to Jonathan Coe, an old friend and author in his own right, who got in contact with Graham’s former agent, who sold the book within 3 months.

The conversation is split up with a few readings, each of them read wonderfully, and eliciting laughs from the listeners. Deirdre picks up on this, and asks about the humour and presence of quite dark jokes in the book. Graham says humour can be a great way to express trauma and abuse, and that he didn’t want to write a sad, gloomy book which expressed how bad abuse is. He wanted the focus to be on the stuff he liked as a fourteen-year-old and his adolescence, which the abuse happened to occur and coincide with.

I wouldn’t have been able to write it without the education given to me by my abuser, and that’s something that I’m deeply grateful for.

The event as a whole gets into the heart of the story behind the book, and Graham provides listeners with many insights, such as the book’s publication leading to the un-naming of a performing arts centre which had previously been named after Graham’s abuser, something which Graham says is a ‘minor victory’. He also tells of a few instances of negative reactions, such as one person telling him that Graham, by writing the book, had just ‘pissed all over my childhood’ and another pointing out that he’d misspelt a teacher’s name, thereby throwing everything else into question. In reaction to this, he says: “People are eager to find ways to discredit it.”

He discusses class, memory and the issue of trigger warnings, which he says suggests that there’s a process to solving a problem. He reels off a list of seemingly insignificant things that can trigger him: a certain perfume, the texture of someone’s collar etc.

When receiving questions from the floor, Graham is asked what it’s like having the book out there being read and reviewed. ‘Strange’ is his main feeling towards it, but he says that the strangest part isn’t the book being reviewed by publications such as The Guardian , The Times and TLS, it’s actually when he’s in a coffee shop such as The Bean in Beeston, and someone comes up to him and says ‘I read your book’.

He says those are the moments he realises that the “book doesn’t belong to you, it belongs to the world.” He doesn’t regret telling his story, that he feels both “insulated and exposed” by it, but that ultimately its existence “validates something that I’ve carried around with me.”

The book itself holds a number of fascinating realisations in terms of Graham’s being able to write it in the first place. He says, “I wouldn’t have been able to write it without the education given to me by my abuser, and that’s something that I’m deeply grateful for.”

It’s also apparent that he couldn’t write it until his parents had passed away. His mother clung to her faith, and Graham believes that it was this that kept her going after his father had died. Revealing his abuse from his priest and teacher “would have been like telling her that God doesn’t exist.” So it was only after her death that he was able to write about it.

At the end of the event, the attention turns to his next book, which he’s 25,000 words into already, and which will be on the history of agraphobia. He says that he never made a conscious decision to write another book, he just carried on from this one.

A wonderful, insightful evening with plenty of books bought and signed by Graham, it was enough to make everyone want to get home and start reading (or re-reading) the book, with the added knowledge of all that he shared with us.

Read our interview with Graham Caveney.