Written on December 1, 2017. Posted in Literature, The Beestonian. Leave a Comment

A catch up with local author Clare Harvey…

I met local author Clare Harvey and her black Alsatian-cross Jake in Froth, which is part of the aptly named Creative Corner in Chilwell. I’d met Clare quite by chance at the re-opening of Beeston’s library in September. Clare has written three novels so far: The Gunner Girl, The English Agent and The Night Raid, with a fourth currently being penned. Her stories have all featured independent, strong women in a World War II setting.

I firstly asked Clare about her beginnings and how she got into writing. “I was born in Barnstaple, North Devon, but spent time growing up in Mauritius, as my dad worked at a teacher training college there. After some more moving around, I took a Foundation Course Diploma in art at Plymouth University, before reading law at the University of Leicester. After graduating, I took some temping jobs in London and then spent a year doing voluntary work and travelling in sub-Saharan Africa. On my return, I moved to the Peak District to work for an overseas development charity, and later returned to London to take a postgraduate course in journalism at the London College of Communication.”

She proposed to her soldier boyfriend Chris in 1996 in Split, Croatia during a 72-hour leave pass from his operational tour in Bosnia. The couple married in early 1998. They moved to Beeston, as Chris was posted to Chetwynd Barracks with the Royal Engineers, and Clare divided her time between an administrative job at Boots’ Head Office and freelance journalism. The couple were then posted to Northern Ireland for two years, where Clare worked as a freelance journalist. It was there that Clare began writing short stories, but she didn’t start work on her first novel until 1998 when they were posted to Germany and pregnant with their first child. “Being an army wife can be a lonely existence, and my writing became a kind of companion in the years when I was the trailing spouse to my husband’s military career.”

“…the revelation that my husband’s mum had been a teenage soldier in the Second World War was an inspiration.”

By 2011 Clare had three children, moved house seven times and written three unpublished novels. Finding herself back in Chilwell, with a husband about to go on a six-month tour in Afghanistan, Clare enrolled on a creative writing MA at the University of Nottingham. That’s when the idea for her debut novel came about. Her husband was polishing his medals ready for the Remembrance Sunday parade, when she remarked that he had more gongs than his dad. Clare’s husband was a third generation career soldier. He replied that his dad didn’t have that many medals, and that the joke in the family was that Mum had seen more enemy action. “How had I not known that my mother-in-law saw active wartime service? I was intrigued. Although she was sadly no longer alive, the revelation that my husband’s mum had been a teenage soldier in the Second World War was an inspiration.”

Whilst her husband was away on active duty, Clare used her MA as an opportunity to write the beginnings of what would become The Gunner Girl. Clare graduated in 2012, just after Chris returned from Afghanistan, and carried on working on the novel, alongside teaching English learners with Voluntary Action Broxtowe, and running art-inspired literacy workshops for primary pupils at Nottingham Lakeside Arts.

Clare finally finished her novel in early 2014, and sent it to the Romantic Novelists Association for feedback. They suggested a few tweaks. By October she had signed with an agent. Then in November she got her first two-book deal with Simon & Schuster. The Gunner Girl was published on the 8th of October 2015, with the paperback coming out three months later. She then had the hard job of writing book number two.

Clare had come across the story of Vera Atkins, who worked for the Special Operations Executive (SOE) during the Second World War, and had the idea that one of the characters from The Gunner Girl (Edie) gets the opportunity of becoming an SOE agent in France. “Setting the book there meant that I had to go to Paris for research purposes. This just happened to be around Valentine’s Day!” The English Agent was published last year. 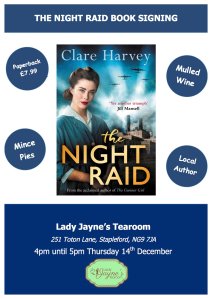 Clare’s third novel, The Night Raid, features lots of Nottingham locations including Bromley House Library and artist Dame Laura Knight as one of the main characters. It was published in July. There is going to be a very special launch for the paperback edition on December 14th. Clare will be officially launching the book at 11am with a ceremony on the ‘Dame Laura Knight’ tram at the NETtram depot, with help from pupils from George Spencer Academy. At 2pm she’ll be at Nottingham Lakeside Arts to talk about how Dame Laura helped inspire the novel and signing copies of her books (booking essential, via Lakeside Arts: 0115 846 7777). Then at 4pm, she will be more signings at Lady Jayne’s Vintage Tearoom, next to Toton Lane tram stop, where there will also be mulled wine and homemade mince pies on offer.

It’s always interesting to read about what routines authors have for getting their words down, so of course I had to ask Clare what hers were. “I manage to do about 45 minutes in the morning, before everyone else is up and then take the kids to school.  I’ll then usually work through, until its time to do the school run. I storyboard everything, like a film director does, and I always write in longhand, before typing it up on the laptop. I prefer to write in silence, but am happy to listen to music when I’m at the editing stage.”

Finally, I asked Clare about book number four. “It’s a two-timeline story. One takes place in Germany 1945 as the Red Army move in, and the Iron Curtain falls. While the other is set in 1989 in the UK and Berlin, as the Berlin Wall falls and the Iron Curtain rises.”  The Escape should be published in hardback next August.

You can find out more about Clare on her publisher’s author page: http://www.simonandschuster.co.uk/authors/Clare-Harvey/576635850

Or catch up with her on social media:

Written on June 8, 2017. Posted in Jade Moore, Literature, The Beestonian. Leave a Comment

A couple of years ago when I was still an undergraduate, I found myself being taught how to do HTML and WordPress with a select bunch of other writers. Our teacher was Giselle Leeb, 47, website developer, IT trainer and writer. She’s lived in Beeston for two and a half years but grew up in South Africa. I caught up with her to find out what she’s up to and how her writing career is going.

Giselle has had 20 short stories published so far. They have appeared in publications such as Reckoning, Litro, Lady Churchill’s Rosebud Wristlet, Mslexia, The Stockholm Review, and Firewords Quarterly among others. She has recently become assistant editor at Reckoning, an annual journal of creative writing on environmental justice, who published her short story Wolfinia in December 2016.

The secret behind getting her stories published is to always write and constantly submit. “I write every day except for weekends,” says Giselle. “I’ve got enough short stories to try and put some into a collection, I’ve got the stories and the manuscript ready.”

For someone who usually submits short stories to publications, putting together a collection would seem like the natural progression. I ask her which publishers she has in mind for the collection.

“There’s quite a few good indie publishers, but it’s very hard to get short story collections published if you’re a relatively unknown writer.”

Giselle submits stories as much as she writes them, and doing so has revealed new things about her writing style and capabilities that even she didn’t realise. The last story she had published was ‘The Dog’s Aren’t Barking’ which appears in Supernatural Tales. She wrote it and submitted it despite it not being her preferred genre.

“I don’t normally write supernatural stories,” she reveals. “That’s the longest short story I’ve written (about 6,500 words). I was a bit unsure because it’s not my usual genre. I wasn’t sure if they would publish it but I was very chuffed.”

She describes her usual genre as ‘literary slipstream’, an area of fiction I’d never heard of until that moment. “It’s a bit like magic realism or weird tales,” she explains. “It’s a literary story setting in a real town but there’s some strange element to it.”

It’s absolutely essential to have feedback from a group

Although I write fiction and poetry, I hardly ever submit them to competitions or publications, but Giselle believes that submitting work helps with the motivation to write.

“I’ll try out competition themes and sometimes they spark something off. You can get too distracted by it, addicted,” she laughs.

She also makes use of websites that can help with tracking submissions such as Duotrope and The (Submissions) Grinder. “I’ve got about 20 stories I’m sending out at the moment so it’s quite important. It’s really easy to forget where you’ve sent a story.”

For anyone who has never submitted creative work before and doesn’t know where to start, the answer is simple: Google it.

“Look at competitions,” says Giselle. “It will always be there, it’s not like anyone is going to take it away or do the exact same stories!”

In issue 47 of The Beestonian we featured an interview with Beeston author Megan Taylor, who is Giselle’s partner. They met through both being members of the same fiction group, and had known one another two years before they got together. Giselle explains the benefits of being in a relationship with another writer.

“We write quite differently but I think we’ve got a good appreciation of each other’s work. We definitely bounce ideas off each other but it’s never rivalrous. For me, it’s absolutely essential to have feedback from a group or from Megan.”

In the near future Giselle is hoping to so some workshops with Writing East Midlands, but for now she is enjoying going through the slash pile of unsolicited submissions at Reckoning, and getting an idea of what it feels like to be on the other side.

It was announced recently that Giselle will have one of her stories published in Best British Short Stories 2017 by Salt Publishing. The anthology will be available on 15 June and is available to pre-order now from Amazon and Waterstones.

You can find out more about Giselle’s writing and publications on her website: giselleleeb.com