The Village (or Market) Cross 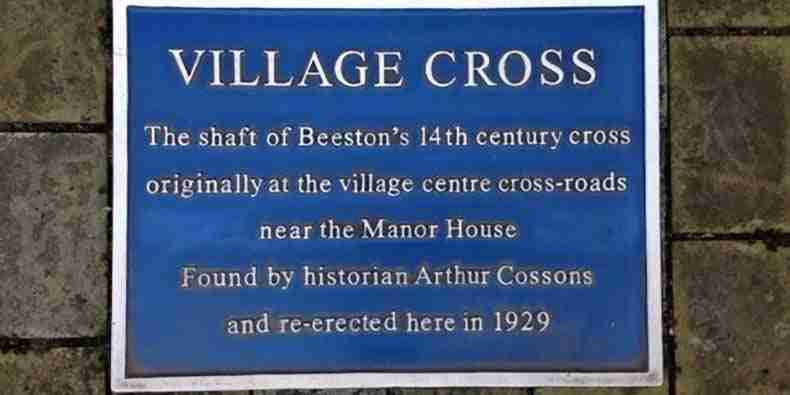 Although not a War Memorial by any means, the story of Beeston’s ‘Village Cross’ is so bound-up with that of the ‘Memorial Cross’. It is no coincidence that Beeston has a ‘cross’ as it’s war memorial or that it should stand on the site that it does. Through changes to the road layout over time, the Memorial Cross now appears to stand by the side of Middle Street. In actual fact this site was once in the middle of the road at this important road-junction between Church Street, Dovecote Lane, West End and Middle Street. Here was once the geographical heart of the settlement that was to become the town of Beeston.

In Britain, over 1,000 years ago, when Christianity began to spread among the pagan Anglo Saxons, the new faith was preached to the people from a stone pillar, (‘preaching cross’) erected in the heart of the community. This was most often close to the manor house, the home of the most important member and leader of the community. Once Christianity had been establish,  a parish church was built, first in ‘wattle-and- daub’ and latter in stone. With the new church, preaching crosses became redundant and many took on a secular use as market crosses. We might add here that this is the evolution of many village crosses, however, there are a large number of market crosses purposefully erected to mark the place of village commerce.

…two of the most important buildings in the community, the Manor House and parish church are close by the site.

It is known that a village cross stood at the centre of the Middle Streets crossroads. Given the facts, it is no surprise then, to find that two of the most important buildings in the community, the Manor House and parish church are close by the site. It is suspected that Beeston’s village cross was once used as a market cross. Certainly there are clues to this effect; it is widely believed that a corn market was held nearby the site, – until the 1860s, Middle Street, from the Memorial Cross to its junction with Station Road was known as Market Street.

The cross was removed, perhaps as a hazard to road traffic, sometime in the 1850’s and the whereabouts of its remains lost until 1929. It was in that year that part of the cross was discovered built into the wall of Manor Lodge, by the headmaster at ‘Church Street Junior Boys School’,  Arthur Cossons. Cossons was an active ‘local historian’ with a passion for Beeston’s history. He recognised a large piece of masonry in the wall as being a part of the ‘shaft’ of a  medieval cross. Proud of his discovery, Cossons had the cross shaft removed to Church Street and erected by the side of the school where it stands to this day.