Thirty Years in the Hood 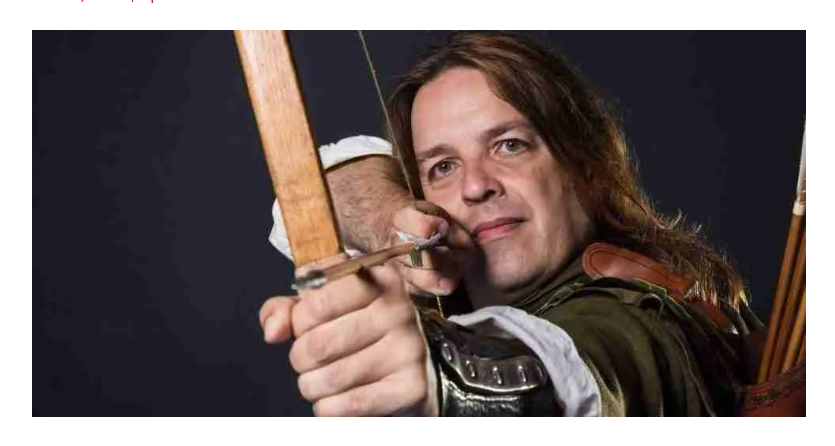 As I type (once again, way past the deadline for this issue – I really am a rogue and a rebel*) it’s most definitely autumn. Brown leaves are falling turning to mulch on wet morning pavements; cars and their windscreens are covered in shiny condensation or sparkling, gentle frost and Scarlett is again entranced by blowing clouds of ‘steam’ out when she breathes. I tell her she’s a dragon and she laughs, happily replying “Only a baby one, I can’t breath fire yet!”

Autumn is a really evocative time for me as for many years it used to be the start of the busiest time of my year as Nottingham’s Official Robin Hood, and it occurs to me that this is now the thirtieth year of my playing the part – that’s what some people might call a career (especially if it had ever paid well)!

As the leaves change from green to red to brown and the cold evening breeze begins to smell of fires, fireworks and frost I’m reminded how I used to enjoy taking part in the Robin Hood Pageant up at Nottingham Castle – once a glorious three day event which had battles, entertainment, a whole medieval village of craftsmen, traders and storytellers, German Schnitzels as big as your head and a wonderful beer tent which became our temporary home from home in the dark long after the floodlit jousting was over and the gates had shut. As well as taking part in the arena shows I used to perform a comedy fireshow there with my great friend Rob Sim – including my impressive ‘Dragon’s Breath Fireblow’, something I certainly won’t be teaching Scarlett how to do for a great many years – she can stick with steam! 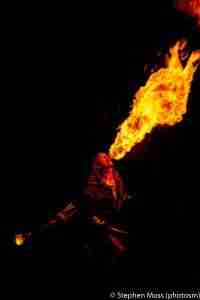 Goose Fair was another staple as I used to accompany the official Civic party (or ‘the chain gang’, as they laughingly refer to themselves) of Mayors, Sheriffs, Counsellors and other dignitaries to the legally required reading of the Fair’s Charter which insisted that all livestock to be sold at the market was sold fairly and all weights and measures were to be correct. Then, looking like a hugely misplaced Hogwart’s parade we’d be taken around the fair to go on a few of the more sedate rides (although I used to try and go on the bigger more exciting ones… I once broke the then Sheriff of Nottingham Cllr. Merlita Bryan when I persuaded her to have a go on the ‘Reverse Bungee’ ride – she hated it and really wasn’t well afterwards); sample some mushy peas (the things I do for my city… bleurgh) and try to win giant cuddly toys on the lucky dip.

I won occasionally but the junior naval rating from HMS Sherwood would almost always win, presumably because it was funny to see someone in pristine full uniform cuddling a massive furry animal shedding bits all over it!

There were charity firewalking events too, usually at the Castle, for the visual impairment charity My Sight Nottingham where I had the pleasure and privilege of leading barefoot walkers over red hot burning coals – it’s a fantastic experience and no-one who tried it was ever anything but amazed, enthused and empowered by the experience. Sometimes I did it more than once because it was just such fun too!

And even longer ago there was the start of the Christmas season at The Sheriff’s Lodge, the sadly long-gone medieval banqueting centre at the end of Canal Street that is now just a car park. At its height we would do a show a day for six weeks leading up to the festive period… I’d get to swing down on a rope from a balcony, fight the evil Sheriff’s men and turn the evening into a big party – although there was one evening where as I slid down the rope it tore open the crotch of my leather trousers exposing a lot more of me than usual to the shrieking delight of the table of middle-aged ladies I landed in front of. “Can we just presume I win this fight?” I asked the room before rushing off to find a spare pair..! I often wonder if people parking their cars sometimes see the ‘ghosts’ of Robin Hood, jesters and medieval musicians sitting where the dressing rooms were, forever waiting to go on…

So yes… thirty years. It’s a long time and I’ve thoroughly enjoyed it. It’s not stopping though – in a couple of days time I’m opening the CAMRA Nottingham Robin Hood Beer and Cider Festival at Trent Bridge (the ‘Me Beer Festival’ as I sometimes call it) and that’ll be great fun – and certainly another Autumn tradition.

It’s things like this that I love (and loved) hugely and I miss the camaraderie, fun and silliness of those times past (especially the ones I shared with my late wife Sal as Maid Marian) but seeing Scarlett blow her steamy breath and then giggle as we set off for school in the morning with joy makes me realise there are a lot more good times to come…

* Or ‘annoying pain in the bum’, if you’re our esteemed editor…