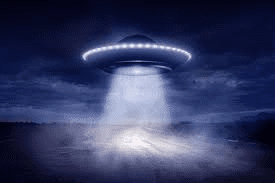 The acronym U.F.O. was created by the United States Air Force in 1952 to describe sightings of flying disc shaped objects previously referred to as ‘flying saucers’

This spate of sightings began in 1947 when aviator and businessman Kenneth Arnold, reported seeing nine such objects flying in formation over Mount Rainier on 24th June of that year. Arnold’s sighting was widely reported in the media and between 1947 and 1952 there followed many thousands of reports of unidentified flying objects of various shapes and sizes from all over the U.S.A. Certainly there was a general consensus of opinion amongst the general public that these were piloted extra-terrestrial craft. Thus was born the modern U.F.O. story.

In Nottingham, a group of ‘Ufologists’ were earnestly studying U.F.O. phenomena. Many of these men had been R.A.F. bomber crew during the War and had been witness to a type of U.F.O. known as ‘Foo-Fighters. These strange balls of red, orange or sometimes white light, first made their reported appearance alongside a squadron of American aircraft in November 1944. From this date onward the crews of Allied aircraft, both American and British witnessed the appearance of Foo-Fighters in both the European and Pacific theatres of war.

It was genuine ambition of one of the founding members of the Nottingham group to persuade George Adamski, starting in Nottingham, to do a lecture tour of the U.K. However, this never came to pass as Adamski died at the age of 74 in 1965.

After working together for several years the Nottingham group broke apart around 1966/67, after the club secretary experienced a more sinister aspect of the U.F.O.  story. As early as 1947, U.F.O. witness Harold Dahl, reported receiving an intimidating and threatening visit from men dressed in black suits who claimed to be government agents. Throughout the 1950’s and 60’s reports of visits by what became known as Men in Black or M.I.B’s, to both U.F.O. witnesses and Ufologist became more frequent. Popular opinion was that M.I.B’s were either genuine government agents or in some cases actual aliens.

The Nottingham club secretary, – a man in his early sixties who had studied the U.F.O. phenomena for a number of years and had amassed a library of books and files, – announced that he had received a visit from M.I.B’s at his home in Wollaton. These two men had told him that unless he gave up his U.F.O. interest, his house would be fire-bombed. Within days of the alleged visit he had sold or given away his entire collection of books, photos and journals and removed every reference to U.F.O’s from his home. Fellow members of the club, even those he had been friends with for many years, never heard from him again.

A mentor of another Nottingham based U.F.O. group (who will remain anonymous here) lived alone in a ‘prefab’ in Aspley decided to advertise for a lodger to help pay the bills. Within a short time of putting a post card in a shop window a young man in his early twenties answered his advert. Giving his profession as a ‘Civil Servant’ the young man stated that he had business in Nottingham and need temporary accommodation. An agreement was made and the man moved in with nothing more than a single small suitcase. Over a few short weeks of his stay, the mentor stated that he demonstrated a good knowledge of Ufology and asked about both U.F.O. groups. At the end of his stay he asked to see members of the group. At the meeting which followed, he claimed to have been an MI6 field agent, one of a number of operatives dispatched by the Government to investigate the threat to National Security posed by U.F.O. groups. Thankfully he announced that they were no threat, packed his bag and they never saw him again.

Another member of the group encountered a siting of a U.F.O. which occurred back in the 1960s:

“On a clear winters evening at around 10 p.m., I was driving my then girlfriend (now my wife) home to Chilwell. Our route took us through Bilborough past Strelley village and south along the Coventry Road. For those who do not know the area, this is a semi-rural road on the extreme western edge of the City of Nottingham. We had reach the cross-roads at Strelley and were turning onto Coventry Road when both of us saw high in the sky, a moving bright star like object approaching us from the south. Making a modern comparison I would say that it was like observing the International Space Station or other artificial satellite. I stop the car a little way past the crossroads and we both got out the vehicle to get a better look.”

“Almost immediately we saw that there was a second identical object approaching from the north. The two seemed to be on a collision cause, becoming larger and brighter as they approached. Slowly the lights drew together and at a point almost directly above our heads stopped and hung side by side in the sky like two bright stars. We continued to observe them in silence for what must have been 3 or 4 minutes.

Suddenly the northern light again began to move. At this stage it became apparent that this object was lower in the sky than its companion, which now seemed even brighter. Moving a little faster than its original approach, it continued south and appeared to pass bellow its still stationary companion, which now shone with the intensity of Venus, (certainly, the brightest object in the sky). After several minutes the moving object was lost to view leaving our attention fixed on the bright object above our heads.”

“It was at this point that something dramatic happened. A small pale blue, star-like light dropped from bellow the bright object. For a few seconds it appeared to free-fall and it shot off at great speed to the west. Seconds later a second identical light dropped and shot off to the east. This was repeated twice more with one light going south and the second north.

The bright object now began to move and continued its original course north. The cold night air had gotten to us at this point and we realised that we had been observing the phenomena for over half an hour. Once back in the car we continued our journey back to Chilwell. I got a telling off from my future father-in-law for bringing his daughter home late. We did not tell him the reason why”.