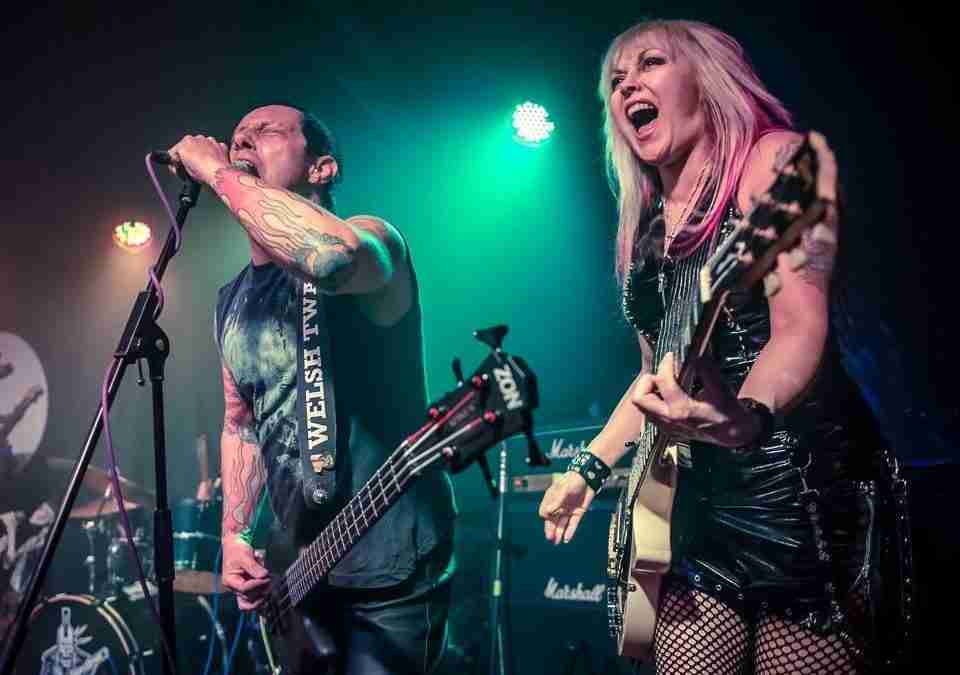 You might wonder which is more surprising, that Vice Squad are playing in Beeston, or that it is free.

But the fact that punk superheroine Beki Bondage gives the town its first notable punk gig since Flux of Pink Indians and The Fits played The Shed in October 1981, surely warrants compulsory attendance. Beki (Rebecca Bond) is notable for many things – touring the USA with Social Distortion and Discharge in 1982, releasing the sparkling single in ’82’s Out of Reach, Stand Strong, Stand Proud the same year, and writing Latex Love as a 14 year-old and still performing it in her 50’s. But of all these things, we should give her most credit for trekking the world, delivering rousing chorus-led shows to balding, middle-aged men, nodding their heads to the soundtrack of their youth. And as any of those elite fans would testify, Beki has channelled her desire to be Lita Ford into a productive, varied output that is received tonight by a vibrant crowd. The set spans 2014’s Punk Police from the Cardboard City LP, Upright Citizen from ‘82’s State of the Nation ep, 2006’s Defiant, Stuck in Reverse from the Punk Rock Radio album, and of course Stand Strong, which Beki assures us is ‘as relevant as ever.’

The post-apocalyptic ‘I’m too young to die/too late to live’ Last Rockers from the 1980 fledgling-Squad’s debut is the one everyone loves – the sooner she realises the musical world ended in 1984 and real fans don’t want new songs, the better! Her crowd-rousing ‘Oi, Oi, Oi’ chant (handing the mike to the crowd for them to reciprocate) is frankly cringe worthy, as is the bassist’s inflated Kiss-style stage routine, and the guitarist’s ‘I’m so crazy’ demeanour. As the sole surviving member of the original band, Beki is frozen in time, and a slew of albums under the reformed post-1997 ‘Vice Squad’ won’t release her from the UK82 tag she hauls from country to country. Yet it’s easy to see why Ms Bond and co. would play the Beeston Greyhound, with its obvious rock-vibe, but a shame that a band she formed as a Bristol punkette in 1978, rarely moves beyond a crowd of 50 diehards who’ve seen her play 30+ times alongside their reluctant girlfriends. The band makes scant new fans along the way, nor wins points for sophistication – after all it’s Vice Squad, not Tuxedomoon for goodness sake – but as music journo Gary Bushell always said of this genre of noise, ‘it’s the sound of the streets.’ Still, tonight’s gig was well appreciated by the jaded punk undead and bemused onlookers of Beeston and it’s fair to say, it was worth every penny…