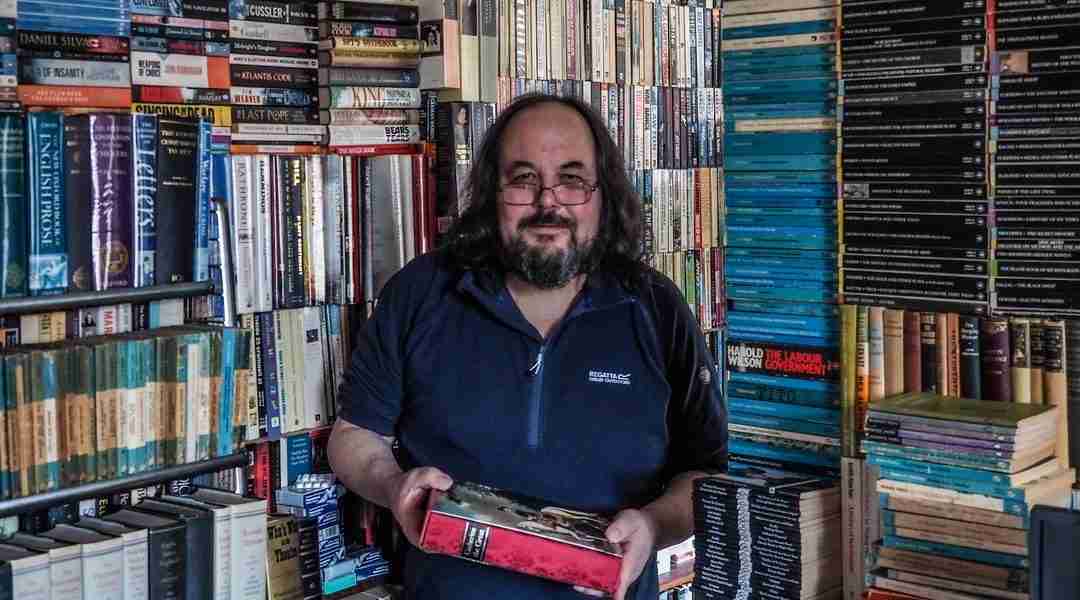 Reading Twitter recently, a series of Tweets caught my eye by someone who goes by the handle of @Plodinnotts. They were mini reviews of books, together with how much they were bought for, and where they were purchased from. Interesting in itself of course, but what intrigued me was the fact that these Tweets were all numbered, and had reached the mindboggling figure of over 19,000, and rising. In fact, they weren’t that far off 20,000.

So who was this mysterious bookworm, and did they in fact live in a library? Well no, they don’t. The bookworm is called Nick Morrell, and he lives in a small flat in the Rylands. Made even smaller by the number of volumes piled up to the ceiling along every wall.

We arranged to meet at his flat, and upon entering, I was met, not by Nick, but a large stack of CD’s, that wouldn’t look out of place in Rob’s Records. “I didn’t know that you collected CD’s too”, I said, whilst trying to work out how many they were and if I recognised any of the artists. “It’s amazing what twenty quid online can buy”, replied Nick, as he offered me a chair in his living room. One that didn’t have any books on it.

Looking round, I was truly astonished at the amount of literature before me. Can we start with a bit about your background, and how you got into collecting? “I was born in a council house in Strelley. My dad was a manager at the big Co-op on Parliament Street. He also ran the store in Beeston. He was a reader, but mum liked things tidy, so used to throw out our books whenever she could. Dad didn’t complain about this, as he liked to keep her happy. So I would say that my habit of collecting books has been in retaliation to that. A way of fighting back. Dad used to get me annuals from work after Christmas was over. It was never the well known ones like the Beano or Rupert, but the less popular ones that never sold.”

“When I went to grammar school, they had lots of books and I had a friend whose father was a well known Professor of Law at the University of Nottingham. They lived near the QMC. I went round once and was amazed that they had their own library. I think it was then that I decided to become a collector and create a library for myself. I started off with the Penguin Classics and used to visit Jeremy & Westerman’s bookshop on Mansfield Road. This was in the early 1980s, when secondhand books were quite cheap. My uncle was also a voracious reader. So he also had an big influence on me. Especially as he used to give me books as well.” 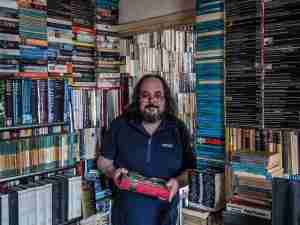 “I then went to Newcastle University to study English. It was great there, and I got to go on University Challenge and Mastermind. For my thesis I wrote about the Karla trilogy by John Le Carre.” This is of course the series of novels about George Smiley’s hunt for KGB agents. The most famous book being ‘Tinker, Tailor, Soldier, Spy’. “After university, I got a job also working for the Co-op. But these days I am a middle grade civil servant.”

Returning to the books. When did you start counting to find out how many you had collected? “It started around Christmas 2013. At that point I had 10,900. Of course, I’ve not read them all. I see it as a kind of art project. I like the randomness of going to charity shops, jumble sales and visiting online auctions. As you never know what you could end up with. I’ve always enjoyed going to the big jumble sale at the Wollaton Scouts. They always have lots of books left over. Enough to fill my car twice. So I’ll just buy the lot off them, which of course they are happy about.”

Do you have a favourite publisher? “Well, I’ve mentioned Penguins before, and I also like Granta. It’s because they are numbered, and it’s good to try and get the full series.” The part of one wall is full of old style Penguin books with their distinctive orange covers. Another wall holds the blue of the Pelicans, which tended to be science, history and art based paperbacks, rather than novels.

Obviously with this amount of books, aren’t you afraid of the floor collapsing, or it being a fire hazard? “The property is 110 years old, and I’ve been here over thirty three years, so I think it’s ok. Some of the walls aren’t true. I am getting someone to put up some shelves in the bedroom, as I have come home in the past and found a pile of books on the bed, as they have fallen off. I do smoke, so there’s always that risk. My biggest fear is actually having to move. Having to pack everything up. I’ve recently acquired a new landlord, so I’m hoping he will leave me alone, just like the old one did.”

“My biggest problem is lack of time to keep on top of things. I’ve got books to sort and to put with others, collections to move and some to give away. No matter how bad the book, there’s always a nugget of information in it. I’ve also got to buy a new stepladder, as my other one broke, and I can’t get to the top rows of books.”

As I am writing this, Nick has published a tweet about book 20035, entitled ‘The Quest for Corvo’. To keep up track of the books he’s tweeted about, he writes a Post-It note and sticks it inside the book. Besides books, cricket is another great love of his, having played the game a lot in his younger days.

I take his photo, bid him a farewell and depart. Reflecting on his vast collection. I can relate to him in some ways, as I like to collect things myself, and try and get the full set of something that I am collecting at the time. But I don’t think I have this compulsion so severely, although my wife may disagree with me, as she sees the quantity of Lego that I have bought since lockdown began!